EU "Cookies" Directive. Interactive guide to 25th May and what it means for you. EU 'cookie laws' set for further overhaul. The Privacy and Electronic Communications (e-Privacy) Directive was last reformed in 2009 and resulted in major changes to the way website operators display information about cookies and obtain internet users' consent to their use. 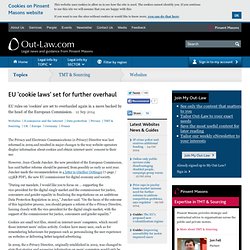 However, Jean-Claude Juncker, the new president of the European Commission, has said further reforms should be pursued, from possibly as early as next year. Juncker made the recommendation in a letter to Günther Oettinger (7-page / 153KB PDF), the new EU commissioner for digital economy and society. "During our mandate, I would like you to focus on … supporting the vice-president for the digital single market and the commissioner for justice, consumers and gender equality in finalising the negotiations on an ambitious Data Protection Regulation in 2015," Juncker said. 20+ examples of EU cookie law 'compliance' When the EU e-Privacy Directive was first announced, it was thought that the internet would collapse as we were hit with a wall of pop-ups asking for cookie consent. 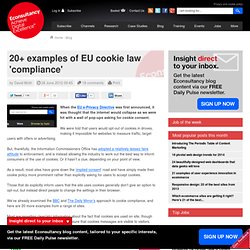 We were told that users would opt-out of cookies in droves, making it impossible for websites to measure traffic, target users with offers or advertising. But, thankfully, the Information Commissioners Office has adopted a relatively laissez faire attitude to enforcement, and is instead allowing the industry to work out the best way to inform consumers of the use of cookies. Or it hasn't a clue, depending on your point of view. As a result, most sites have gone down the ‘implied consent’ road and have simply made their cookie policy more prominent rather than explicitly asking for users to accept cookies. Blog - EU Cookie Law - Regulations ePrivacy US Do-Not-Track - Comply with US DNT and EU cookie law. 2011 EU Cookie Legislation - Opinion of a UK Web Developer. If you are not familiar with the new EU legislation which came into law yesterday on Friday 26th May, you can read the UK's ICO release about it here. 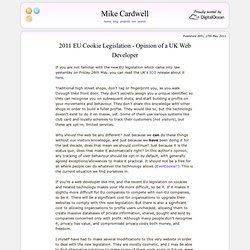 Traditional high street shops, don't tag or fingerprint you, as you walk through their front door. They don't secretly assign you a unique identifier, so they can recognise you on subsequent visits, and start building a profile on your movements and behaviour. They don't share this knowledge with other shops in order to build a fuller profile. They would like to, but the technology doesn't exist to do it en masse, yet. Some of them use various systems like club card and loyalty schemes to track their customers (not visitors), but these are opt-in, limited services. Why should the web be any different? If you're a web developer like me, and the recent EU legislation on cookies and related technology makes your life more difficult, so be it. Cookie-consent-tracking-table. Privacy watchdogs deem advertising code non-compliant with EU cookies laws. Website operators that track internet users' online activity in order to serve targeted adverts do not automatically comply with EU privacy laws by following the industry code, a committee of all the EU's national data protection regulators has said. 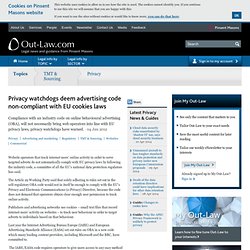 One Per Cent: Websites to tell users if they're tracked. Duncan Graham-Rowe, contributor Soon websites in the European Union will need to get explicit permission from surfers before being allowed to track their online browsing habits. 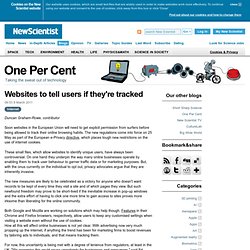 The new regulations come into force on 25 May as part of the European e-Privacy directive, which places tough new restrictions on the use of internet cookies. These small files, which allow websites to identify unique users, have always been controversial. New European rules on cookies coming in May. Internet Privacy : The Cookie Controversy. The most pressing issue concerning cookies, more than possible hardware invasions and general unease with the placing of files on user hard drives by third parties is the concern of user privacy and the potential for abuse. 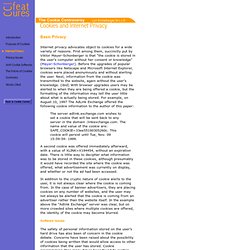 Advertisers and webmasters are currently using cookies to develop detailed profiles of users and their browsing habits. Each click on a particular type of advertisement or page in a website is added to the profile maintained by the maintainer. For the time being this information is primarily used for website design and the placement of banner advertisements, but the possibility also exists for these profiles to be sold and resold to other commercial interests (Roubulack). While this might at first seem to be only a nuisance, which would probably lead only to a serious increase in "targeted" junk paper mail or e-mail, there are more serious concerns for potential abuse. It is an extreme example, but does point up a disturbing prospect for abuse. Businesses urged to prepare for EU cookie laws. Businesses need to ensure they are ready for EU legislation requiring them to get consent if they want to track user behaviour. 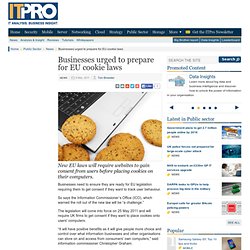 So says the Information Commissioner’s Office (ICO), which warned the roll out of the new law will be “a challenge.” The legislation will come into force on 25 May 2011 and will require UK firms to get consent if they want to place cookies onto users' computers. “It will have positive benefits as it will give people more choice and control over what information businesses and other organisations can store on and access from consumers’ own computers," said information commissioner Christopher Graham. “Businesses and organisations running websites in the UK must wake up to the fact that this is happening.” Despite the warning, Graham said the ICO was clear the changes should not have a detrimental impact on consumers nor cause “an unnecessary burden on UK businesses.” Bittersweet cookies. Some security and privacy considerations. New net rules set to make cookies crumble. 8 March 2011Last updated at 03:50. 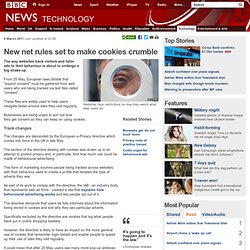 Governments 'not ready' for new European privacy law. 9 March 2011Last updated at 07:55 Cookies are used by websites to save user preferences between visits. 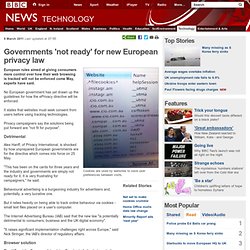 European rules aimed at giving consumers more control over how their web browsing is tracked will not be enforced come May, experts have said. No European government has yet drawn up the guidelines for how the ePrivacy directive will be enforced. It states that websites must seek consent from users before using tracking technologies. Privacy campaigners say the solutions being put forward are "not fit for purpose". Stupid EU cookie law will hand the advantage to the US, kill our startups stone dead. As if European startups weren’t already at a notional disadvantage in addressing smaller markets, having access to less venture capital and being geographically spread out, a new EU-wide law proposes to hobble its innovation companies by slapping big privacy warning signs all over their sites. 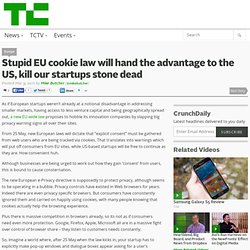 Why the Cookie Monster Won’t Kill European Startups: Tech News and Analysis « Europe’s technology scene is awash with fear and loathing today, after entrepreneurs finally realized new rules regulating online privacy could affect their businesses. In particular, they’ve suddenly cottoned-on to the fact that a pan-European directive about the use of cookies, which is due to come into force on May 25, could have an impact on them. The story is getting a lot of press and attention right now — most of it very negative indeed. The BBC says the rules are “set to make cookies crumble”, while TechCrunch Europe says it will “kill our startups stone dead”. So what are they so worried about? Let’s walk through the issues.

EU “Cookies” Directive. Interactive guide to 25th May and what it means for you.