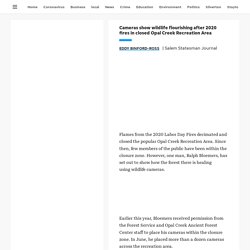 Since then, few members of the public have been within the closure zone. However, one man, Ralph Bloemers, has set out to show how the forest there is healing using wildlife cameras. Earlier this year, Bloemers received permission from the Forest Service and Opal Creek Ancient Forest Center staff to place his cameras within the closure zone. In June, he placed more than a dozen cameras across the recreation area. "There's just a lot of misunderstanding about what fire does to forests, and I felt that the best way to address those was just to show people the thing itself," Bloemers said.

When Bloemers went to check the cameras in November, he found they had captured images of a variety of animals and the wildlife seemed to be doing well. The pictures and videos showed deer and elk eating new growth. Seventy-Two Hours Under the Heat Dome. The high winds that make up the polar jet stream encircle the Northern Hemisphere like a loosely draped rope. 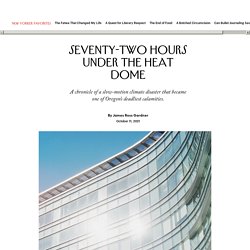 There are typically four or six curves in the rope, the result of the temperature differences between the equator and the North Pole. The pattern of these curves is usually predictable, the weather associated with them—warm or cold spells, rain or snow—sticking around for a week or two, unless a significant event disrupts it. On June 20th, a tropical depression that appeared in the western Pacific, near Micronesia, may have been the beginning of such a disruption. The next day, as the tropical depression moved northwest, past Guam, it gathered enough force—sustained winds of forty miles per hour—to qualify as a tropical storm. 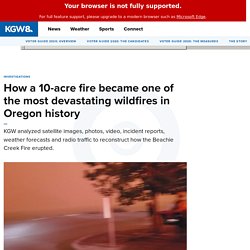 PORTLAND, Ore. — The Beachie Creek Fire claimed at least five lives, decimated thousands of structures and scorched nearly 200,000 acres. So how did a relatively small fire, smoldering in the Oregon wilderness for weeks turn into one of the most destructive wildfires in state history? Our house. Very fine house. To gazebo. The gazebo. Some yard. Yard Las Margaritas. Our chickens. Mini me. Ave was born here. Ave 3 bdy Sta Cruz Little Fawn & Kether. 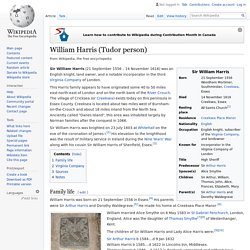 This Harris family appears to have originated some 40 to 50 miles east-north-east of London and on the north bank of the River Crouch. The village of Cricksea (or Creeksea) exists today on this peninsula in Essex County. Creeksea is located about two miles west of Burnham-on-the-Crouch and about 18 miles inland from the North Sea. Anciently called "Danes Island", this area was inhabited largely by Norman families after the conquest in 1066. Harris Arms of William's grandfather and namesake, presumed to be similar or the same as Sir William's Obverse and Reverse of the Seal of the Virginia Company Rapier of Sir William Harris held in All Saint's Church.

10 Best Companies for Non-GMO Heirloom Seeds. Steer clear of Monsanto’s GMO seeds and support companies doing the most good for the planet If you buy seeds that aren’t organic, open pollinated or heirlooms, you are most likely buying from a company owned Monsanto called Seminis. 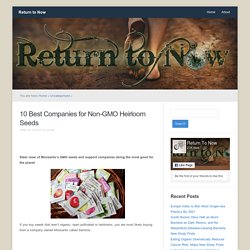 Seminis has been buying up patents on most nursery seed varieties like Early Girl and Better Boy tomatoes. Even if the particular seeds you choose from these companies aren’t GMO, you’re still sending money back to Monsanto. The only way to be sure you’re not buying genetically modified seed is to buy organic, heirloom or open pollinated seed from companies who take the Safe Seed Pledge. While there are hundreds of companies that have signed the Safe Seed Pledge, the Small Footprint Family highlights the following ten because “they each have something extra special about their mission, their catalog, or their business practices that fosters greater sustainability for people and planet.” 1. 2. 3. 4. 5. 6. 7. 8. 9. 10. Bill Philips - c. 1900, The Cliff House, burned and...