America's largest organization for youth volunteering opportunities, with 2,700,000 members and counting. Sandy’s Aftermath. Millions of people along the East Coast, and as far inland as Michigan, are feeling the aftermath of Hurricane Sandy. 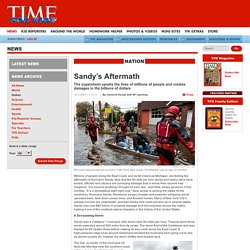 Now that the 60 mile per hour winds and heavy rains have ended, officials and citizens are surveying damage that is worse than anyone had imagined. “It is beyond anything I thought I’d ever see,” said New Jersey governor Chris Christie. “It is a devastating sight right now.” New Jersey is among the states hit the hardest by Hurricane Sandy. Monstrous surges of water and powerful, whipping winds uprooted trees, took down power lines, and flooded homes. A Devastating Storm Sandy was a Category 1 hurricane with winds near 90 miles per hour. A fire in Queens, New York destroyed over 50 homes during Hurricane Sandy.

The eye, or center, of the hurricane hit land late Monday near the southern coast of New Jersey. Sandy’s Destructive Trail Sandy has left about 8.3 million people in 17 states without power, extending as far west as Michigan. Hurricane Katrina: Facts, Damage & Aftermath. Hurricane Katrina was one of the deadliest hurricanes ever to hit the United States. 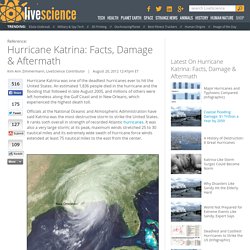 An estimated 1,836 people died in the hurricane and the flooding that followed in late August 2005, and millions of others were left homeless along the Gulf Coast and in New Orleans, which experienced the highest death toll. Officials at the National Oceanic and Atmospheric Administration have said Katrina was the most destructive storm to strike the United States. It ranks sixth overall in strength of recorded Atlantic hurricanes. It was also a very large storm; at its peak, maximum winds stretched 25 to 30 nautical miles and its extremely wide swath of hurricane force winds extended at least 75 nautical miles to the east from the center. Hurricane Katrina moved ashore over southeast Louisiana and southern Mississippi early on August 29, 2005, as an extremely dangerous Category 4 storm.Credit: GOES Project Science Office How Katrina formed Political storm Credit: AP/Dave MartinCredit: AP/Dave Martin. 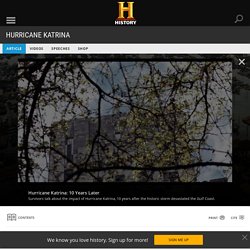 The Coast Guard, for instance, rescued some 34,000 people in New Orleans alone, and many ordinary citizens commandeered boats, offered food and shelter, and did whatever else they could to help their neighbors. Yet the government–particularly the federal government–seemed unprepared for the disaster. The Federal Emergency Management Agency (FEMA) took days to establish operations in New Orleans, and even then did not seem to have a sound plan of action. Officials, even including President George W. Bush, seemed unaware of just how bad things were in New Orleans and elsewhere: how many people were stranded or missing; how many homes and businesses had been damaged; how much food, water and aid was needed. (For one thing, many had nowhere to go. 50 years since Hurricane Carla - From the Vault. While this country remembered the September 11th attacks ten years ago Sunday, that day also marked the 50th anniversary of Hurricane Carla. 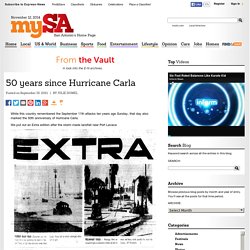 We put out an Extra edition after the storm made landfall near Port Lavaca: According to Texas Hurricane History, “Carla was among the largest hurricanes of historical record.” Hurricane force winds were seen along almost the entire Texas coast. By Sept. 9, Carla filled the entire Gulf of Mexico. National Weather Service data showed that hurricane force winds extended 150 miles from the eye, with tropical storm winds extending 250 miles. It led to the “largest peace time evacuation of an area in history, up until that time”: 500,000 people moved inland to safety. The storm — a Category 4 — left a path of destruction from Victoria to Dallas, and damage extended into Louisiana. According to the National Weather Service, Carla “was the most intense hurricane to strike Texas in the 20th century. Newspapers weren’t the only media to cover Carla. Hurricane Carla. Arla was her name. 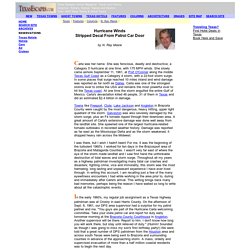 She was ferocious, deadly and destructive; a Category 5 hurricane at one time, with 175 MPH winds. She slowly came ashore September 11, 1961, at Port O'Conner along the middle Texas Gulf Coast as a Category 4 storm, with a 22-foot storm surge. In some places that surge reached 10 miles inland and wind damage was reported as far north as Dallas. Carla was one of the strongest storms ever to strike the USA and remains the most powerful ever to hit the Texas coast. At one time the storm engulfed the entire Gulf of Mexico. Towns like Freeport, Clute, Lake Jackson and Angleton in Brazoria County were caught by the most dangerous, heavy hitting, upper right quadrant of the storm. I was there, but I wish I hadn't been! In the early 1960's, my regular job assignment as a Texas highway patrolman was at Crosby in east Harris County. GenDisasters ... Genealogy in Tragedy, Disasters, Fires, Floods.