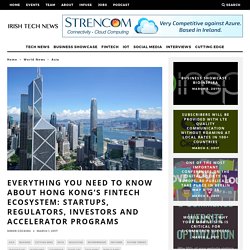 Elena is a Market Research Analyst at LTP where this article first appeared. 38 FinTech Companies in Kenya to Look out for in 2017 Why Hong Kong? Charles d’Haussy, the Head of FinTech at Invest Hong Kong (InvestHK), gave a perfect answer to our question, saying,“Hong Kong has all the ingredients to be the global and regional FinTech hub. It is one of the international financial centers, the freest economy, rule of law, large talent pool, a strong legacy of trade and work ethic.

The Hong Kong SAR (HKSAR) Government has pledged full support to the FinTech sector, mentioned by our Chief Executive in his latest Policy Address. Indeed, Hong Kong has been an innovation hub for many years and is uniquely positioned to become a launch-pad into the biggest consumer market in the world with the support of private and public sector entities. Bitcoin Trading Sites 2017 - Where to Trade Now!

Bitcoin underwent a lot of ups and downs in its brief history and we have made a a complete guide to bitcoin for those who need a speedy update on the bitcoin trading ecosphere. 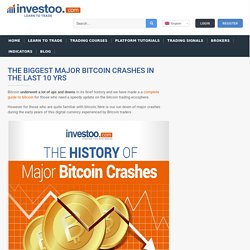 However for those who are quite familiar with bitcoin, here is our run down of major crashes during the early years of this digital currency experienced by Bitcoin traders . Copy and paste the code below to embed this infographic on your website. LendIt USA 2017. "Great event on the disruption in the financial services industry by marketplace lenders, investment platforms and the entire ecosystem. 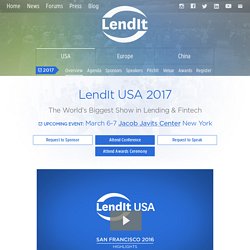 Excellent speakers and some of the best fireside chats I have had the pleasure of attending. " Sundip PatelCEO, AVANA Capital "LendIt is THE conference if you want to start a lending company, invest in a lending company, or learn about fintech in general. Innovate Finance – The Voice of Global FinTech. ING’s agile transformation. LONGREAD: Everything you’ll ever need to know about blockhain – and more. There is a great quote from the start of the movie The Big Short by Ryan Gosling’s character Jarred Vennett. 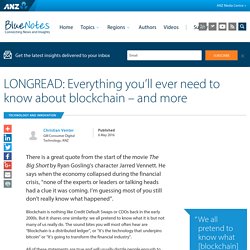 He says when the economy collapsed during the financial crisis, “none of the experts or leaders or talking heads had a clue it was coming. I’m guessing most of you still don’t really know what happened”. Blockchain is nothing like Credit Default Swaps or CDOs back in the early 2000s. Blockchain for Wall Street.

The Future of Cryptocurrency - Deep Dive Data & Forecasting 2016-2021 - Juniper Research. OverviewJuniper has developed benchmark forecasts on the cryptocurrency industry, providing market sizing and forecasts for the Bitcoin and Altcoin markets. 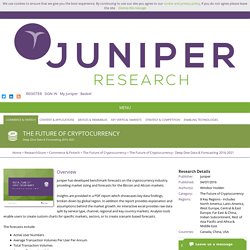 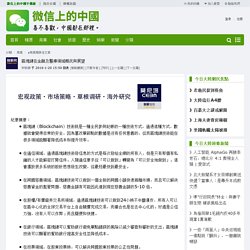 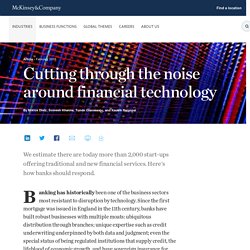 Here's how banks should respond. Banking has historically been one of the business sectors most resistant to disruption by technology. Since the first mortgage was issued in England in the 11th century, banks have built robust businesses with multiple moats: ubiquitous distribution through branches; unique expertise such as credit underwriting underpinned by both data and judgment; even the special status of being regulated institutions that supply credit, the lifeblood of economic growth, and have sovereign insurance for their liabilities (deposits). Euroclear Sees Seven Steps to Bring Blockchain to Capital Markets. Post-trade settlement specialist Euroclear has co-authored a new report on how blockchain and distributed ledger technology can be adapted for capital markets. 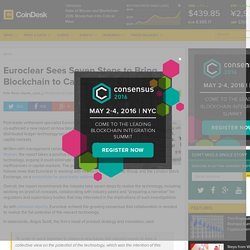 Written with management consulting firm Oliver Wyman, the report takes a positive stance on the technology, arguing it could eliminate delays and inefficiencies in capital markets. The publication follows news that Euroclear is working with its peers, including CME Group and the London Stock Exchange, on a consortium for post-trade settlement. Overall, the report recommends the industry take seven steps to realize the technology, including working on proof-of-concepts, collaborating with industry peers and "preparing a narrative" for regulators and supervisory bodies that may interested in the implications of such investigations.

As with previous reports, Euroclear echoed the growing consensus that collaboration is needed to realize the full potential of the nascent technology. For more information, read the full report. Smart Refill. 點融網巨額融資的背後：渣打盡調9個月花了900萬美金. 投資界8月20日消息，點融網在上海宣布獲得2.07億美元C輪融資，渣打銀行及中國互聯網金融科技基金（CFF）領投，渤海租賃及之前的兩輪投資方參與了跟投。 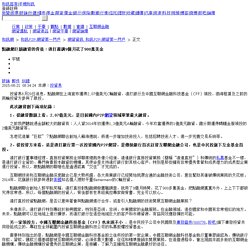 此次融資創下兩項紀錄： 1、從融資數額上看，2.07億美元，是目前國內P2P網貸領域單筆最大融資。 How the payments industry is being disrupted. Global payments revenues have been growing at rates in excess of expectations. 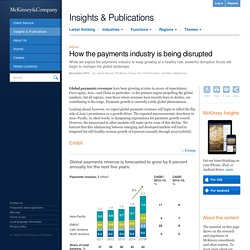 Once again, Asia—and China in particular—is the primary engine propelling the global numbers, but all regions, even those where revenues have recently been in decline, are contributing to the surge. Payments growth is currently a truly global phenomenon. Looking ahead, however, we expect global payments revenues will begin to reflect the flip side of Asia’s prominence as a growth driver.

The expected macroeconomic slowdown in Asia–Pacific, in other words, is dampening expectations for payments growth overall. However, the turnaround in other markets will make up for some of this decline. Our most recent research reveals several additional trends of note. Messaging Apps: The New Face of Retail Banking. 打破貸款業暴利！台灣新創Installments，獲得170萬美元種子投資.

EY Cybersecurity. Cyber threats will continue to multiply. The advent of the digital world, and the inherent connectivity of people, devices and organizations, opens up a whole new playing field of vulnerabilities. Cyber risks are growing and are changing rapidly. Every day, hackers are working on new techniques for getting through the security of organizations, including yours. They are doing this so that they can cause damage, access sensitive data and steal intellectual property. As old sources of cyber threat fade, new sources will emerge to take their place. iResearch-2015%E5%B9%B4%E4%B8%AD%E5%9B%BD%E7%94%B5%E5%AD%90%E6%94%AF%E4%BB%98%E8%A1%8C%E4%B8%9A%E7%A0%94%E7%A9%B6%E6%8A%A5%E5%91%8A%E7%AE%80%E7%89%88.pdf. Citi Mobile Challenge. 1-8 API管理快速整合雲端與既有系統. DIGITIMES Mobile Web. FinovateSpring 2016. Conferences Showcasing The Future of Financial And Banking Technology - Finovate.

Fintech Innovation Lab. Financial services: The fintech revolution. Hoodies at Goldman Sachs: how the banks are fuelling a fintech start-up boom. Daniel Nadler, the 32 year-old founder of Goldman Sachs-backed Kensho, which has invented a “Siri for investors’ called Warren. Accenture-The-Future-of-Fintech-and-Banking-digitallydisrupted-or-reima-.pdf. Goldman Sachs Investment Activity into FinTech Startups Intensifies. Goldman Sachs is an active investor in high-flying tech companies ranging from Spotify to Docker to Uber. Here's where the bulge bracket bank is focusing its Fin Tech investment strategy. Over the past several years, Goldman Sachs has made a number of private investments into tech companies including Spotify, Flipboard, Lookout and perhaps most notably, Uber. Banks lag manufacturers and telcos in race to build innovation centres.

The financial services sector is trailing rival industries in the race to set up innovation centres in technology hubs such as Silicon Valley, according to a report issued by consultants CapGemini and Altimeter Group. Major organisations are increasingly establishing a base in the home of software invention in a bid to fix what is deemed to be a broken R&D model, says the report titled 'The Innovation Game: Why and How Businesses are Investing in Innovation Centres'. The report shows that while 38% of the world's biggest 200 companies have made such a step, only 28% of financial services have done so, leaving it trailing all other sectors with manufacturing topping the poll at 58%.

Midyear Outlook: Five Distinct Macro Disconnects. By HENRY H. MCVEY Jun 25, 2015 While we certainly appreciate that generating outsized returns has gotten more complicated as the cycle has progressed, we still see five distinct macro “disconnects,” or arbitrages that we view as attractive for long-term patient capital. First, given ongoing financial services de-leveraging, we still view the current illiquidity premium that has emerged in many lending arenas as quite compelling. Second, in an environment where central banks are holding nominal interest rates below nominal GDP, we favor real assets with yield, growth, and inflation hedging. Financial technology. Financial technology, also known as FinTech, is an industry composed of companies that use new technology and innovation with available resources in order to compete in the marketplace of traditional financial institutions and intermediaries in the delivery of financial services.[1] Financial technology companies consist of both startups and established financial and technology companies trying to replace or enhance the usage of financial services of incumbent companies.

Definition and key areas[edit] Looked at from a procedural perspective, the term 'FinTech' refers to new applications, processes, products or business models in the financial services industry, composed of one or more complementary financial services and provided as an end-to-end process via the Internet. London is home to Europe's hottest fintech startups as 24 of the FinTech50 come from the capital.

London once again dominates in a new list of the hottest European FinTech startups as the capital continues to put its backing behind the sector's growth. Businesses from the capital represent almost half of those chosen as the FinTech companies to watch in 2015 by a panel of senior executives from across the world of finance, investment and technology. Some 24 London-based companies have made FinTechCity's Fintech50, a list of 50 startups considered game-changers, or have the potential to become major players in the FinTech sector, due to their growth, disruption and market impact.

The firms were decided by a panel which included judges from Google, Microsoft, American Express, Santander, Silicon Valley Bank and a selection of venture capital firms working in the city. London's well-known FinTech firms such as TransferWise, Funding Circle and Nutmeg, are joined on the list by smaller startups from the capital such as Commuter Club, Osper, and Algomi. 金融科技三革命 顛覆市場. 金融科技正夯！理財服務比較平台ComparreAsiaGroup獲4千萬美元投資. 金融科技正夯！ Welcome to CompareAsiaGroup. Cornerstone Wealth Management Group - UBS Financial Services Inc. The Cornerstone Group - UBS Financial Services Inc. FinTech金融科技：走出硬體思維，台灣必須卡位的新產業.

近年來國際上吹起了一個新的關鍵字：FinTech。 FinTech是Financial Technology的縮寫。 翻成中文則是金融科技。 How to Stop Procrastinating and Start Succeeding. 數位金融 金管會推4措施 但借貸P2P、純網銀再研究. 記者顏真真／台北報導 因應數位金融時代的來臨，金管會主委曾銘宗16日表示，將推動4大措施包括開放銀行投資金融科技(FinTech)相關產業、強化金融業投資IT產業、要求金融機構提出員工未來1到3年的轉型計畫及金融資料原則上將全部開放。 至於個人借貸平台(P2P)及純網銀，他強調，金管會態度都是開放的，但金融監理必須掌握科技發展趨勢外，也要考慮對市場的衝擊。 曾銘宗16日出席「數位金融3.0」論壇致詞指出，因應金融數位化時代來臨，金管會將採4大措施，首先檢討相關法令，以因應業界發展需求，尤其，金融業投資金融科技(FinTech)的鬆綁，由5%放寬至100%，預計8月底前完成。 此外，所有金融業也要加強IT投資，相關部門、流程也必須進一步，以因應數位化時代來臨。 iTech Capital pumps $3m into fintech firm TradingView. Private equity firm iTech Capital has invested $3m in TradingView, a social fintech platform that unites traders and investors from around the world. iTech Capital, who will take a minority stake in TradingView, led the Series A round, which amounted to $3.6m alongside other seed investors and angels.

These are the FinTech startups being backed by Citi. Plug and Play FinTech. Citi looks to build a global ecosystem for FinTech.