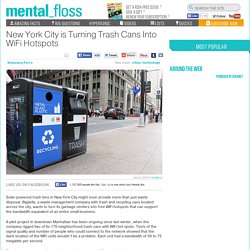 Bigbelly, a waste management company with trash and recycling cans located across the city, wants to turn its garbage centers into free WiFi hotspots that can support the bandwidth equivalent of an entire small business. The MINIX 3 Operating System. Welcome - Linux Wireless. 3D Printer Gives You Chocolate When You Work Out. If being chased by imaginary zombies doesn’t speed up your run, you may need to take more drastic measures—like rewarding yourself with chocolate. 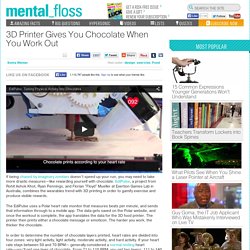 EdiPulse, a project from Rohit Ashok Khot, Ryan Pennings, and Florian "Floyd" Mueller at Exertion Games Lab in Australia, combines the wearables trend with 3D printing in order to gamify exercise and produce visible rewards. The EdiPulse uses a Polar heart rate monitor that measures beats per minute, and sends that information through to a mobile app. The data gets saved on the Polar website, and once the workout is complete, the app translates the data for the 3D food printer.

The printer then prints either a chocolate message or emoticon. Free Downloads Encyclopedia. The Linux Foundation. ASIMO. Development history[edit] P3 model (left) compared to ASIMO Honda began developing humanoid robots in the 1980s, including several prototypes that preceded ASIMO. It was the company's goal to create a walking robot which could not only adapt and interact in human situations, but also improve the quality of life.

Android (operating system) Android is an operating system based on the Linux kernel,[12] and designed primarily for touchscreen mobile devices such as smartphones and tablet computers. 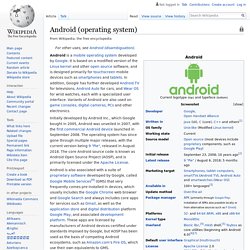 Initially developed by Android, Inc., which Google backed financially and later bought in 2005,[13] Android was unveiled in 2007 along with the founding of the Open Handset Alliance—​a consortium of hardware, software, and telecommunication companies devoted to advancing open standards for mobile devices.[14] The first publicly available smartphone running Android, the HTC Dream, was released on October 22, 2008.[15] The user interface of Android is based on direct manipulation, using touch inputs that loosely correspond to real-world actions, like swiping, tapping, pinching, and reverse pinching to manipulate on-screen objects. 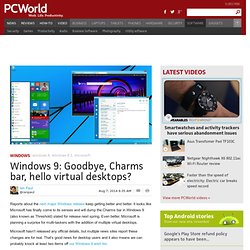 It looks like Microsoft has finally come to its senses and will dump the Charms bar in Windows 9 (also known as Threshold) slated for release next spring. Even better, Microsoft is planning a surprise for multi-taskers with the addition of multiple virtual desktops. Microsoft hasn't released any official details, but multiple news sites report these changes are for real. That's good news for desktop users and it also means we can probably knock at least two items off our Windows 9 wish list. Charmless Windows. Home Magazine. The Phone Call Is Dead. Photo © 2008 mike | more info (via: Wylio) In the tech industry saying that something is dead actually means “It’s on the decline.” The christian computer and media user. Are you a responsible digital citizen? TechEBlog. Technology News - Computers, Internet, Invention and Innovation Tech. 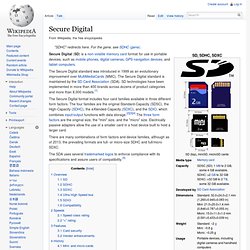 The four families are the original Standard-Capacity (SDSC), the High-Capacity (SDHC), the eXtended-Capacity (SDXC), and the SDIO, which combines input/output functions with data storage.[2][3][4] The three form factors are the original size, the "mini" size, and the "micro" size. The SDA uses several trademarked logos to enforce compliance with its specifications and assure users of compatibility.[5] Overview[edit] Stack Overflow. Nokia e71 blog. Technology News - Computers, Internet, Invention and Innovation Tech.