School system in the USA worksheet. U.S. History: Free streaming history videos and activities. Mission US. Geografi - Huvudstäder i USA:s delstater. Geografi - Amerikanska stater. US GEOGRAPHY. U.S. States Maps & Stats. 50 States Song for Kids/50 States and Capitals for Children/USA 50 States. States and Capitals Song by Musical Stew. Wakko's 50 State Capitols with Lyrics/Subtitles. Understanding the American National Anthem for English Language Learners. On the morning of September 14, 1814, the sun rose to reveal a surprising sight to Francis Scott Key. Just a month after the British had burned the White House during the height of the War of 1812, Key was aboard a British vessel negotiating the release of a friend who was being held prisoner.

While Key penned three more verses in addition to the well-known first verse, these are the only words that most Americans know: This is the first verse of the “Star-Spangled Banner.” Webquest: Independence Day: History and traditions. By Karen Kovacs Perhaps the most famous independence day is that of the United States of America on 4 July. 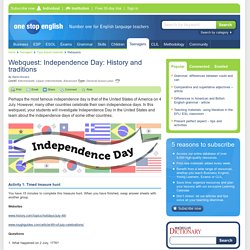 However, many other countries celebrate their own independence days. In this webquest, your students will investigate Independence Day in the United States and learn about the independence days of some other countries. Activity 1: Timed treasure hunt You have 15 minutes to complete this treasure hunt. Websites www.history.com/topics/holidays/july-4th www.roughguides.com/article/4th-of-july-celebrations/ Questions. DiscoverAmerica l USA Travel Guides & Photos. Explore the 50 states. ROAD TRIP USA. Games and Activities about America. 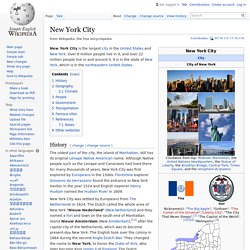 Over 8 million people live in it, and over 22 million people live in and around it. It is in the state of New York, which is in the northeastern United States. English Around the World. Materials for Learning English. Travel resources. Strip the City San Francisco. Mediecenter Värmland / Den stora Amerikaresan - Roadmovie. Teaching American History Through Art. 5 Fun Geography Games for Geography Awareness Week. The Best Websites For Teaching & Learning About U.S. History. I just agreed to teach two classes of United States History next year to English Language Learners. 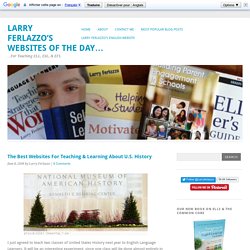 It will be an interesting experiment, since one class will be done almost entirely in the computer lab and the other will be mostly in my classroom. I’ll be doing a number of different assessments with both groups over the year (including self-assessments) to compare results between the two. Given these upcoming classes, I thought it would be helpful for me to develop another “The Best…” list, this time focusing on U.S. History sites. I have an extensive collection of U.S. In order for a site to make it onto this list, they needed to be…. * …broad in the time periods they covered. * …offer something “value-added” by being on the Internet over a hard-copy textbook. * … accessible to English Language Learners. * …. available free-of-charge (except for one). I found surprisingly few sites that had all these elements. Here are my choices for The Best Websites For Teaching & Learning About U.S.