Easily Create Your School's Mobile App. This increased home Internet access by way of mobile phones should encourage us to solicit data from our own school families on how they are choosing to communicate via mobile phone for personal day-to-day tasks and relationship building. 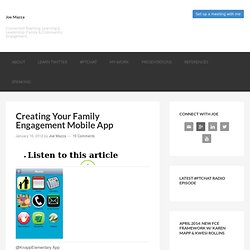 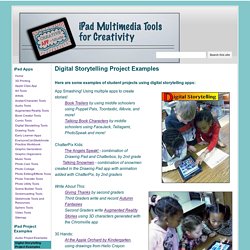 With Just One iPad, Teachers Improve Classroom Lessons. Contact: Katie Neal, nealkc@wfu.edu, (336) 758-6141 Newswise — Winston-Salem, NC, Jan. 4, 2012 - While K-12 schools around the country search for funding to provide iPads to every student, an education researcher in North Carolina has found that even a single iPad can make a huge difference in the classroom. 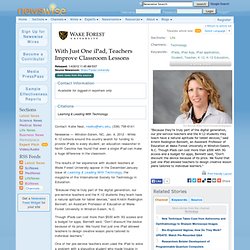 The results of her experience with student teachers at Wake Forest University appear in the December/January issue of Learning & Leading With Technology, the magazine of the International Society for Technology in Education. “Because they’re truly part of the digital generation, our pre-service teachers and the K-12 students they teach have a natural aptitude for tablet devices,” said Kristin Redington Bennett, an Assistant Professor of Education at Wake Forest University in Winston-Salem, N.C. Though iPads can cost more than $500 with 3G access and a budget for apps, Bennett said, “Don’t discount the device because of its price. Comment/Share. 100+ Registration Free Tools for Students. 10 Professional Development Books for Teachers. $59 Adapter Connects Apple TV Any AirPlay To Virtually And Display System.

Kanex adapter and Apple TV bring AirPlay to virtually any venue AirPlay and AirPlay Mirroring add a lot of value to the second and third generation Apple TVs. 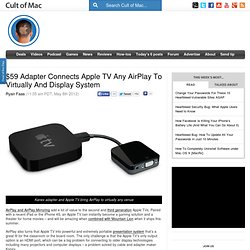 Paired with a recent iPad or the iPhone 4S, an Apple TV can instantly become a gaming solution and a theater for home movies – and will be amazing when combined with Mountain Lion when it ships this summer. AirPlay also turns that Apple TV into powerful and extremely portable presentation system that’s a great fit for the classroom or the board room. The only challenge is that the Apple TV’s only output option is an HDMI port, which can be a big problem for connecting to older display technologies including many projectors and computer displays – a problem solved by cable and adapter maker Kanex. Kanex today announced its new ATV Pro adapter designed for the Apple TV. The device also works great for existing presentation solutions in classrooms, conference rooms, and other venues that don’t include HDMI support. The Carlene Cantrell Daily. Move to @Google Apps for Education Help Needed.

Heart of the Heartland « Ted Landphair’s America. The United States is finally getting around to building a memorial to Ike: Dwight D. 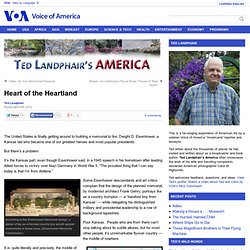 How Tech Will Transform the Traditional Classroom. Ben Jackson is a writer and app developer living in Brooklyn, NY. 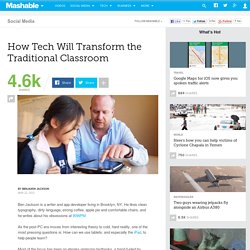 He likes clean typography, dirty language, strong coffee, apple pie and comfortable chairs, and he writes about his obsessions at 90WPM. As the post-PC era moves from interesting theory to cold, hard reality, one of the most pressing questions is: How can we use tablets, and especially the iPad, to help people learn? Most of the focus has been on ebooks replacing textbooks, a trend fueled by Apple’s recent updates to iBooks. Specifically, the company released iBooks Author, a tool for creating immersive ebooks on the desktop. Plus, the new iPad is now the first tablet with a retina screen, making reading and watching multimedia on the device even more enjoyable. Educator Resource Center. Concordia Kansas Public Schools - FUN SITES. This Web site was designed using Web standards. 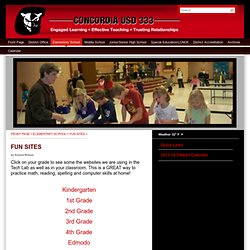 Learn more about the benefits of standardized design. Quick Links Main Navigation. 80+ Google Forms for the Classroom. The Carlene Cantrell Daily. Best of the Web 2011/2012. Google for Educators - Resources for using Google in school. CristinaSkyBox. The Carlene Cantrell Daily. EduTecher. 30 Old PC Ads That Will Blow Your Processor. Top 10 Sites for Educational Games. There's no denying the appeal that online games have on kids. 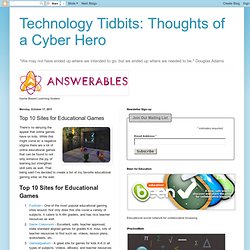 While this might come w/ a negative stigma there are a lot of online educational games that can be found to not only enhance the joy of learning but strengthen skill sets as well. That being said I've decided to create a list of my favorite educational gaming sites on the web. Top 10 Sites for Educational Games Funbrain - One of the most popular educational gaming sites around. Not only does this site cover a variety of subjects, it caters to K-8th graders, and has nice teacher resources as well.Game Classroom - Excellent, safe, teacher approved, state standard aligned games for grades K-6.