William Davies on Worker Happiness. The end of capitalism has often been imagined as a crisis of epic proportions. 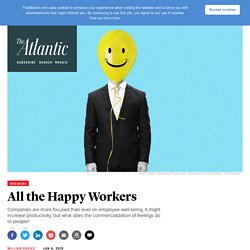 Perhaps a financial crisis will occur that is so vast not even government finances can rescue the system. Maybe the rising anger of exploited individuals will gradually congeal into a political movement, leading to revolution. Might some single ecological disaster bring the system to a halt? Most optimistically, capitalism might be so innovative that it will eventually produce its own superior successor, through technological invention.

But in the years that have followed the demise of state socialism in the early 1990s, a more lackluster possibility has arisen. This fear has gripped the imaginations of managers and policymakers in recent years, and not without reason. Lack of engagement from the workforce also registers as a problem for governments, inasmuch as it bites into economic output, and in doing so hits tax receipts. Work email is making us a ‘generation of idiots’. Time to switch off. Social media damaging our work-life balance – that was the subject of the talk I gave to the British Psychological Society in Liverpool a few weeks ago. 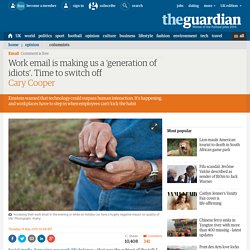 My topic was “mental capital and wellbeing at work”: the need for people to have control or autonomy in the job; to be managed by praise and reward rather than fault-finding; to have manageable workloads and achievable deadlines; and, most importantly, to have some balance in their lives. I highlighted research that showed that consistently working long hours was having a damaging effect on the health of workers, their family life and their productivity. 14 Heartbreaking Photos That Will Inspire You to Recycle. People who still use old gadgets. Fashion is cyclical and technology is no exception - the current trend in gadgetry is for retro-styled pieces that remind us of our childhoods. 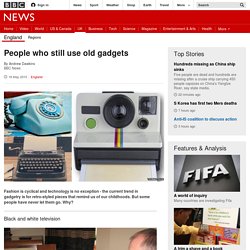 But some people have never let them go. Why? Black and white television John Thompson likes watching TV in black and white so much he now plugs his Freeview digital box into a 15in set made in 1949. The element that made the 20th Century shine. Chromium is the chemical element of modernity - the key to innumerable gleaming, spotless surfaces. 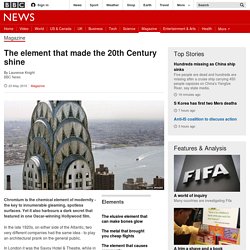 Yet it also harbours a dark secret that featured in one Oscar-winning Hollywood film. In the late 1920s, on either side of the Atlantic, two very different companies had the same idea - to play an architectural prank on the general public. A question of etiquette: do you hold the door for others? Whether one person holds a door open for another is not simply a question of etiquette, says a study by Joseph P Santamaria and David A Rosenbaum of Pennsylvania State University. 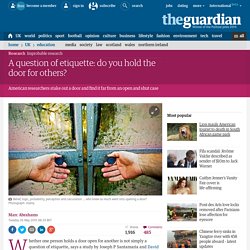 No, they say. Nothing simple about it. Santamaria and Rosenbaum worked to pursue the answer through a tangle of belief, logic, probability, perception and calculation. Their study, Etiquette and Effort: Holding Doors for Others, was published in 2011 in the journal Psychological Science. It is, one way or another, a gripping read. Santamaria and Rosenbaum selected a door that gets heavy use by people entering or exiting a building. “We found,” they reveal, “that the closer the follower or followers were to the door, the more likely people were to hold the door open.” The researchers devised the experiment to test their new hypothesis — their highly educated guess — as to what happens in the mind of a person faced with a decision to either hold the door open for the next person, or not hold the door open. 10 Words Every Girl Should Learn. By Soraya Chemaly / rolereboot.org "Stop interrupting me. 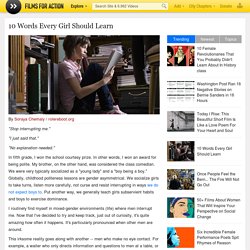 " "I just said that. " "No explanation needed. " In fifth grade, I won the school courtesy prize. In other words, I won an award for being polite. I routinely find myself in mixed-gender environments (life) where men interrupt me. This irksome reality goes along with another -- men who make no eye contact. These two ways of establishing dominance in conversation, frequently based on gender, go hand-in-hand with this last one: A woman, speaking clearly and out loud, can say something that no one appears to hear, only to have a man repeat it minutes, maybe seconds later, to accolades and group discussion.

Which is the safest city in the world? It’s not a recent initiative, but as far as unusual – and effective – measures to improve road-traffic safety go, mime is still hard to beat. 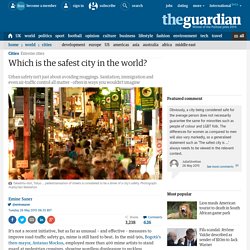 In the mid-90s, Bogotá’s then-mayor, Antanas Mockus, employed more than 400 mime artists to stand guard at pedestrian crossings, showing wordless displeasure to reckless pedestrians and drivers who violated traffic rules and put lives at risk. The experiment was included on the list of 100 Promising Practices on Safer Cities, a collection of global initiatives commissioned last year by UN-Habitat – the branch of the United Nations which looks at how to make an increasingly urbanised world work best.

In recent years, however, various initiatives introduced in Bogotá to make walking and cycling safer have slipped. Bogotá is by no means the world’s safest city. So where is? The first thing to consider is that safety isn’t just about how likely you are to be a victim of violent crime. Tokyo scored highly across all categories. Best books by billionaires - Business Insider.