Watching violent films does make people more aggressive, study shows. Their brains were scanned as they watched a succession of shootings and street fights on day one, emotional but non-violent scenes such as people interacting during a natural disaster on day two and nothing on day three. 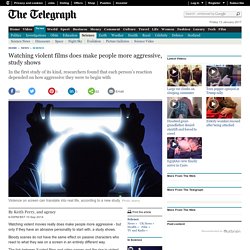 While watching violence the aggressive group had less activity in the orbito-frontal cortex, which controls emotion-related decision making and self-control. These subjects said they felt more more inspired and determined and less upset or nervous than their non-aggressive counterparts when watching violent instead of only emotional scenes. Violence in the Media — Psychologists Study TV and Video Game Violence for Potential Harmful Effects. 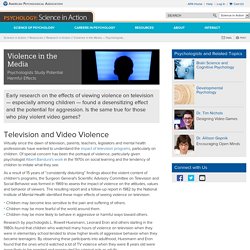 Violent Video Game Effects on Aggression, Empathy, and Prosocial Behavior in Eastern and Western Countries: A Meta-Analytic Review. Psychological Bulletin, Vo. 126, No. 2. Anderson, C. A., Carnagey, N. L. & Eubanks, J. (2003). Video Games: Violent, Yes. But Do They Make Us Violent? 51211How Parents and Policymakers Handle Violent Video GamesPBS NewsHour correspondent Jeffrey Brown taps into a discussion about the connections -- or lack of connections -- between violent video games and violent behavior. 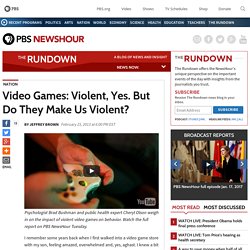 The Newtown killer reportedly spent hours playing such games, but is there any evidence that one thing leads to the other? Psychologist Brad Bushman of Ohio State University and public health expert Cheryl Olson weigh in. 2013-02-15 18:00:00disabledIdY7ehahp2M Psychologist Brad Bushman and public health expert Cheryl Olson weigh in on the impact of violent video games on behavior. Watch the full report on PBS NewsHour Tuesday. Do violent video games make children more aggressive? A few days ago, a review of 300 studies on violent video games and children’s behavior was released by the APA Task Force on Violent Media. 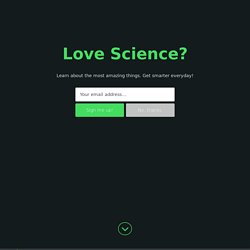 The report concludes that violent video games present a “risk factor” for heightened aggression in children and call for a revamping of the video game rating system that took more notice of violence and for games to be more appropriate to the players’ age and psychological development.However, despite claiming the review “demonstrates” a link between playing violent video games and aggression, the authors acknowledged that some studies were inconsistent and that present research is insufficient to establish whether this can lead to criminal violence or delinquency. “The research demonstrates a consistent relation between violent video game use and increases in aggressive behaviour, aggressive cognitions and aggressive affect, and decreases in pro-social behaviour, empathy and sensitivity to aggression.” 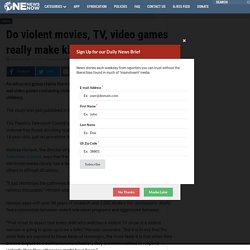 The study was just published in the journal, Psychology of Popular Media Culture. The Parent's Television Council supports the findings and says its own research on violence has found shocking types of violent content rated as appropriate for 14-year-olds, just on primetime broadcast television alone. Melissa Henson, the director of grassroots education and activism for the Parents Television Council, says that the violence children view from different forms of electronic media clearly has a detrimental effect on them and the way they react to others in difficult situations. “It just reinforces the pathways that encourage violence is the solution, rather than a rational discussion,” Henson attests. 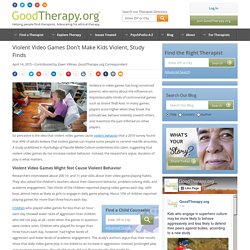 In many games, players score higher when they break the (virtual) law, behave violently toward others, and maximize the pain inflicted on other players. So pervasive is the idea that violent video games cause violent behavior that a 2010 survey found that 49% of adults believe that violent games can inspire some people to commit real-life atrocities.