Assessment: attitudes, practices and needs. The Farmer and the Fortune Teller: Using stories to teach grammar – Jason Anderson – Teacher, teacher educator and author. Some of us love grammar lessons, but others… If you, or your learners, fall into the second category, one great way to make grammar meaningful, interesting and even edifying is to adapt stories to include a little grammar that you can then extract and analyse. 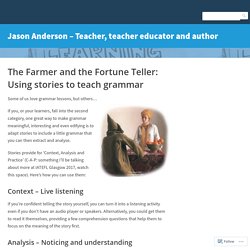 Stories provide for ‘Context, Analysis and Practice’ (C-A-P: something I’ll be talking about more at IATEFL Glasgow 2017, watch this space). Here’s how you can use them: Context – Live listening If you’re confident telling the story yourself, you can turn it into a listening activity even if you don’t have an audio player or speakers. Analysis – Noticing and understanding It’s useful at this stage to give them a copy of the story, and get them to underline examples of key words, tenses or sentences that you want them to notice.

Practice built-in! A particular advantage of using stories is that once you’ve done the analysis, you can use the same story for the practice. Putting Teacher Action Research Into Action. Personally, I just view it as a teacher systematically putting a simplified version of the Scientific Method to use in his/her classroom: 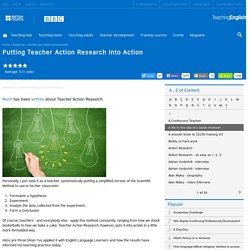 Sense of humour. How many syllabi include the ability to tell or understand a joke? 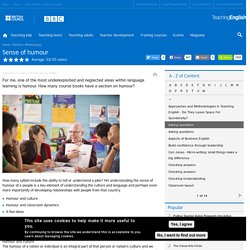 Yet understanding the sense of humour of a people is a key element of understanding the culture and language and perhaps even more importantly of developing relationships with people from that country. Humour and culture Humour and classroom dynamics A few ideas When the laughter stops Conclusion. The stress of social media. WhatsApps. 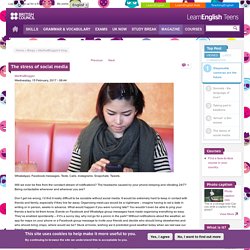 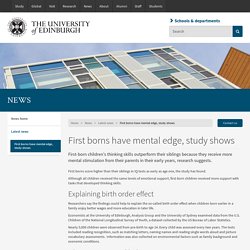 First borns score higher than their siblings in IQ tests as early as age one, the study has found. Although all children received the same levels of emotional support, first-born children received more support with tasks that developed thinking skills. Can we learn a second language like we learned our first? Robert William McCaul, winner (with Marek Kiczkowiak) of the TeachingEnglish blog award, examines the influential ideas of linguist Stephen Krashen, and the implications they have for the language classroom. 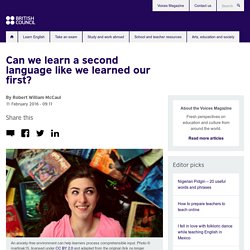 If you've ever doubted whether you're a good language learner, then bear in mind that you've already learned one language very well indeed – your first. But this raises an interesting question: can adults learn a second language in the same way they learned their first as children? And if so, what are the implications for the classroom? Stephen Krashen and the acquisition of languages Perhaps no-one has looked at the question more closely than the linguist Stephen Krashen, who has introduced some of the most influential concepts to the study of second-language acquisition.

Krashen sums up the idea in a famous documentary on the subject called A child's guide to learning languages, produced by BBC Horizon in 1983. Popplet. App per una semplice e intuitiva creazione di mappe mentali. TEFL.com – et tu contra me? by Paulina Woźniak – TEFL Equity Advocates. To be or not to be… I’ve never defined myself as a fighter. 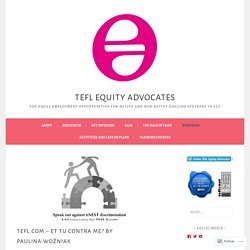 I’ve always followed the rules and believed that if everyone did so, the world would be a wonderful place to live. You might see my attitude as a little bit naïve but I’ve always believed in equality, in the end, we live in the 21st century, we’re getting smarter and more conscious every day. Nevertheless, until very recently I had not seen anything wrong about language schools wanting to hire only native speakers. Create a Book - It's Simple, Free and Fun.

Thank you very much for sharing Ourboox with your community!!! We are the simplest platform anywhere for creating free, amazing, page-flipping picture books (in addition to text and pictures, it's also easy to embed videos, maps, puzzles, etc.). Thanks so much, Mel Rosenberg, co-founder – melrosenberg

How Does the Brain Learn Best? Smart Studying Strategies. In his new book, “How We Learn: The Surprising Truth about When, Where, and Why It Happens,” author Benedict Carey informs us that “most of our instincts about learning are misplaced, incomplete, or flat wrong” and “rooted more in superstition than in science.” 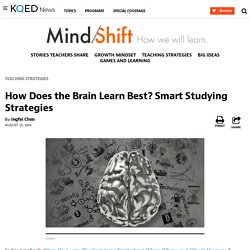 That’s a disconcerting message, and hard to believe at first. But it’s also unexpectedly liberating, because Carey further explains that many things we think of as detractors from learning — like forgetting, distractions, interruptions or sleeping rather than hitting the books — aren’t necessarily bad after all. How Morality Changes in a Foreign Language. What defines who we are? 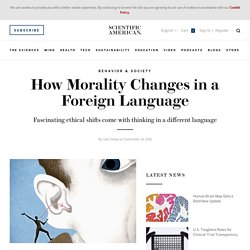 Our habits? Our aesthetic tastes? Our memories? If pressed, I would answer that if there is any part of me that sits at my core, that is an essential part of who I am, then surely it must be my moral center, my deep-seated sense of right and wrong. And yet, like many other people who speak more than one language, I often have the sense that I’m a slightly different person in each of my languages—more assertive in English, more relaxed in French, more sentimental in Czech.

Psychologists who study moral judgments have become very interested in this question. Teacher-induced Neuroses: Pronunciation Angst. When it all goes wrong: 6 tell-tale signs you have lost control. 1. 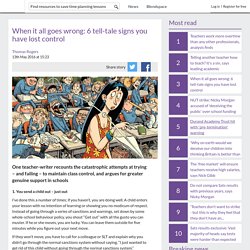 You send a child out – just out I’ve done this a number of times; if you haven’t, you are doing well. Drama techniques to get them talking. 10 common mistakes from non-native English speakers that we should learn to appreciate. Photo: [[^Raúl^]] LANGUAGE IS GIVEN TO US so that we may corrupt it. Like that time we got rid of the word thou in the 18th century. Or cut off a bit of the word obviously and started saying obvs instead. Global Digital Citizen Foundation. 6 Sensational STEM Blogs for Your Students (and You) to Follow As STEM becomes more embedded in the educational consciousness, it's not surprising that more and more blogs on the subject are cropping up all over the Web. Teachers and students will always need tools, resources, and advice on the subjects that interest them.

The... 10 Great Critical Thinking Activities That Engage Your Students. How can students own their learning with critical thinking activities they’ll really love? Allowing our students to take stands on issues that matter to them engages the classroom in a way that fosters great critical thinking. In the Netherlands, sex ed starts in kindergarten. Watch a class get their charming first lesson. Teacher stress, well-being and stress management - Taking care of yourself so that you can take care of your students. Schools and teachers are usually very good at thinking about the well-being of their pupils. We consider ourselves to have a duty of care to our pupils. Understanding Research Methods - University of London & SOAS University of London. About this course: This MOOC is about demystifying research and research methods.

It will outline the fundamentals of doing research, aimed primarily, but not exclusively, at the postgraduate level. It places the student experience at the centre of our endeavours by engaging learners in a range of robust and challenging discussions and exercises befitting SOAS, University of London's status as a research-intensive university and its rich research heritage. Perché gli italiani non sanno l’inglese.

Noam Chomsky on Language Acquisition and Memory Formation. Noam Chomsky Talks About How Kids Acquire Language & Ideas in an Animated Video by Michel Gondry. These days Noam Chomsky is probably most famous for his consistent, outspoken criticism of U.S. foreign policy. Teacher researchers in action. Shakespeare Manga: Early- or Post-modern? Can we learn a second language like we learned our first? Writing Resources - Avoiding Sexist Language - Hamilton College. Avoiding Sexist Language. Theconversation. David Cameron used an article in The Times and an interview on Radio 4’s Today show to announce £20m of extra funding to provide English lessons for Muslim women in the UK to prevent them from becoming “second-class citizens”.

The prime minister’s announcement has come in for harsh criticism, particularly his implication that not speaking English was tied up with a person’s identity and could make someone “more susceptible to the extremist message”. As a researcher studying the teaching of English as an additional language, my main problem with the proposal is the underlying assumption that if mothers could only speak English fluently then their children would not become radicalised. Is The Flipped Classroom Relevant to ELT? A few myths about speakers of multiple languages. Is monolingualism the norm? English Teaching Forum Volume 53, Number 4. OECD study: The perils of e-fixation. A new study carried out by the Organization for Economic Cooperation and Development (OECD) has generated sufficient evidence to say that computers in schools do not necessarily contribute to higher achievement levels by children. The study compared different OECD countries in terms of the average daily time spent by children in computer-assisted learning in the classroom.