In Rewatching "The X-Files," One Thing is Clear: Mulder is A Real Jerk. Gillian Anderson and David Duchovny on the set of the new X-Files miniseries. 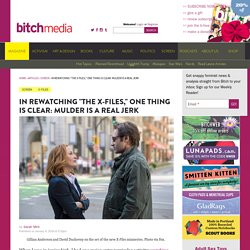 Photo via Fox. Why Chris Messina’s Mindy Project Striptease Was About More Than Just the Eye Candy. This season of The Mindy Project kicked off with a bang. 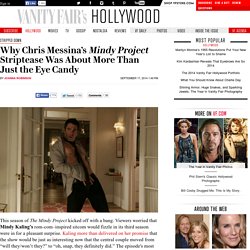 Viewers worried that Mindy Kaling’s rom-com–inspired sitcom would fizzle in its third season were in for a pleasant surprise. Kaling more than delivered on her promise that the show would be just as interesting now that the central couple moved from “will they/won’t they?” A Feminist Guide to The Killing (US) The Killing is one of those shows that I had tons of people recommend to me but I never could seem to get around watching it until the whole American version was finally up on Netflix this year. 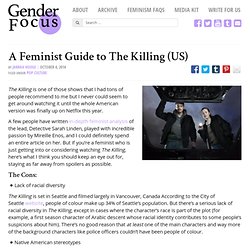 A few people have written in-depth feminist analysis of the lead, Detective Sarah Linden, played with incredible passion by Mireille Enos, and I could definitely spend an entire article on her. But if you’re a feminist who is just getting into or considering watching The Killing, here’s what I think you should keep an eye out for, staying as far away from spoilers as possible. The Cons: Lack of racial diversity The Killing is set in Seattle and filmed largely in Vancouver, Canada According to the City of Seattle website, people of colour make up 34% of Seattle’s population. Native American stereotypes In Season 2, we do get a fair number of scenes featuring Native American characters. First, many of the actors cast to play Native Americans are actually non-natives.

Seed & Spark: In-Betweeners: The Absence of Gender Fluidity in Media. This is a guest post by E.A. 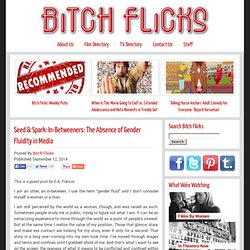 Francis. I am an other, an in-between. I use the term “gender fluid” and I don’t consider myself a woman or a man. I am still perceived by the world as a woman, though, and was raised as such. Sometimes people study me in public, trying to figure out what I am. In some ways, we have come a long way. Characters play a key role in our individual process of self-discovery. Just like an author who writes the book they wish to read, our first instinct with storytelling is to speak the truths and questions that are within us as individuals in the hope that others share the same thoughts.

But there is a timeline, more or less, when a queer character is introduced in media. In Orange is the New Black, Sophia, who is struggling to stay on estrogen as she transitions from a male body to a female body, has a storyline that includes her son distancing himself from her and her wife moving on to be with an actual man. Why Lena Dunham's Girls can't represent every woman - and why it shouldn't have to. Hey girls, we're all the same, aren't we? 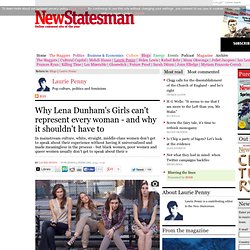 At least, that's what they’d like us to think. We are living through an unprecedented time of narrative richness, when people from an enormous range of backgrounds, including women and people of colour, are finally beginning to share stories about their lives across boundaries of class and distance in numbers too big to ignore. But you wouldn't know it from the mainstream press, which still reserves a very few places for female creators, who are expected to represent all womenkind, then excoriated when they inevitably fail to do so. 'Too Much Estrogen': The Golden Globes, Chris Christie and Men Who Don't Want to Share Culture. Brit Hume thinks Chris Christie is paying for a "feminized atmosphere," in which his naturally tough guy (read: male) behavior has been erroneously cast as bullying. 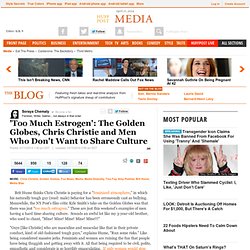 Meanwhile, the NY Post's film critic Kyle Smith's take on the Golden Globes was that there was just "too much estrogren. " These are just this weekend's examples of men having a hard time-sharing culture. Sounds an awful lot like my 3-year-old brother, who used to chant, "Mine! Unité 9 et ses auditrices lesbophobes... l'ironie toué. Féminité VS virilité dans TBBT. Féminité VS virilité dans TBBT. Thoughts on Here Comes Honey Boo Boo. When I first heard about Here Comes Honey Boo Boo, to be honest I was not in the least bit interested. 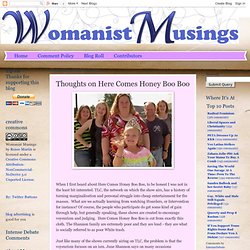 TLC, the network on which the show airs, has a history of turning marginalisation and personal struggle into cheap entertainment for the masses. What are we actually learning from watching Hoarders, or Intervention for instance? Modern Love - A Life to Live, This Side of the Bars. Privileged Tour Guides and the Purpose of Media: OITNB and Facing Reality. Orange is the New Black is getting a lot of rave reviews and for good reason. 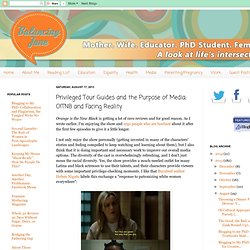 As I wrote earlier, I'm enjoying the show and urge people who are hesitant about it after the first few episodes to give it a little longer. I not only enjoy the show personally (getting invested in many of the characters' stories and feeling compelled to keep watching and learning about them), but I also think that it is doing important and necessary work to improve our overall media options. The diversity of the cast is overwhelmingly refreshing, and I don't just mean the racial diversity. Disabilities Week: 'Glee's Not So Gleeful Representation of Disabled Women. This is a guest review by Erin Tatum. 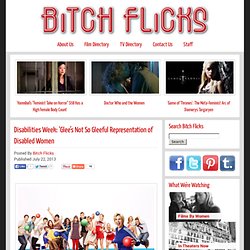 It’s no secret that Glee is offensive to pretty much anyone who isn’t an able white male. While Glee has justifiably received a lot of flak for its treatment of certain communities – notable examples include Brittany breaking up with Santana only to be shoved into a nonsensical heterosexual relationship with Sam and relegating Tina and Mike to the background as self-aware Asian stereotypes – viewers have been relatively mum with respect to Glee’s treatment of disability. Artie is Glee‘s resident disabled character, whose rampant sexism is often played for laughs as he rehearses the trope of masculine entitlement no matter how ridiculous the conditions (in this case, the assumption that his disability should normally negate his sexuality, making his womanizing ways all the more ludicrous).

Given that Artie’s disability is so wrapped up in issues of male privilege, I was curious to see if or how Glee would handle women with disabilities. Sailor Moon Was The Gayest Cartoon On Television. Nerdy men and hot women: sexism in The Big Bang Theory. By Guest Blogger // 20 April 2013, 15:42 Tags: comics, fantasy, geek, science fiction, sexism, sitcom, stereotypes, television, The Big Bang Theory, TV Lucy Pegg argues that the sci-fi/fantasy genre this sit-com is based on has already moved away from the stereotypes of women it perpetuates, leaving it woefully behind.

The Big Bang Theory is America's highest rated comedy. It is regularly E4's most watched show on our side of the Atlantic and can definitely be said to divide opinion. Is it funny or just plain stupid? Une chorale de Girls. My Favorite Female Fictional Characters Who Love Reading. There’s no way to get me to feel an affinity with a character faster than making them a bookworm. A fictional character who loves reading lets me know if that character is interested in adventure or culture or politics or wizards. It lets me know that character is probably an introvert and would probably rather be reading than doing most other useless things, like going to youth discotheques or watching football. Just kidding. The Women of The Walking Dead: A Comparative Analysis of the Comic vs. TV. *Spoiler Alert* If you’re at all like me, you’re constantly frustrated by the characterizations of the women of The Walking Dead AMC series, their choices, and their actions.

The show has received significant criticism for its paternalistic attitude, its throwback gender roles, and its lack of strong, capable female characters. Though the current season (Season 3) has made some positive changes with the greater development of Maggie, Andrea, and Carol as well as the addition of the samurai sword-wielding Michonne, a lot is left to be desired. As a huge fan of the sometimes flawed, but overall intelligent and compelling graphic novel series by Robert Kirkman, I feel it is my duty to show you what you’re missing. Let's All Take a Deep Breath and Calm the Fuck Down About Lena Dunham. Dear Lena Dunham Haters, I’m sick of the Lena Dunham hate. I’m not referring to the criticisms of Dunham, which are—in most cases—valid and necessary critiques of her privilege, especially how that privilege translates into her work.

The first season of Girls in particular either ignored people of color entirely, which is problematic enough since the show takes place in Brooklyn (a predominantly Black neighborhood), but when it did include people of color, they tended to appear as stereotypes (nannies, homeless, etc), and Dunham absolutely deserves to be called out for that. But I’m sick of the Lena Dunham hate. Just take a moment and Google the phrase “I hate Lena Dunham.” Classic Literature Film Adaptations Week: The Tragedy of Masculinity in 'Romeo + Juliet' The opening scene of Baz Luhrmann’s William Shakespeare’s Romeo + Juliet is an intense display of masculinity.

While in the original text the Capulet and Montague men draw swords and taunt one another, Luhrmann’s rivals pull guns, rev car engines, smoke, shoot and light fire to gasoline. Luhrmann’s 1996 film takes Shakespeare’s text–he stays truer to the language than other modern adaptations–and places it in a decidedly modern world of gang violence, guns and ecstasy.

It’s Baz Luhrmann. Woman's Work: When Women Run the Show. On the long-running TV-industry sendup 30 Rock, Liz Lemon's (Tina Fey) colleague Pete Hornberger (Scott Adsit) reveals how her show got the green light: "The only reason NBC picked up The Girlie Show was because of the flak they got from women's groups after airing the action-drama Bitch Hunter. " The ludicrously misogynistic Bitch Hunter illustrates the worst of what can happen when women are denied a seat at the network's table: hate-filled programming that glorifies violence against women. Luckily for us, Lemon reigns as showrunner of TGS and, in real life, Fey helms 30 Rock (and previously SNL as its first female head writer). Moreover, we've seen a new crop of female showrunners in recent years including Lena Dunham, Whitney Cummings, Mindy Kaling, Veena Sud, and Elizabeth Meriwether.