Meet Voice Of Baceprot, The All-Girl Metal Band Making Waves In Indonesia. The Indonesian metal group Voice of Baceprot is one noisy band. 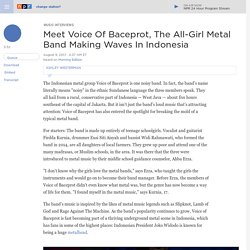 In fact, the band's name literally means "noisy" in the ethnic Sundanese language the three members speak. They all hail from a rural, conservative part of Indonesia — West Java — about five hours southeast of the capital of Jakarta. But it isn't just the band's loud music that's attracting attention: Voice of Baceprot has also entered the spotlight for breaking the mold of a typical metal band. For starters: The band is made up entirely of teenage schoolgirls. Vocalist and guitarist Firdda Kurnia, drummer Eusi Siti Aisyah and bassist Widi Rahmawati, who formed the band in 2014, are all daughters of local farmers.

"I don't know why the girls love the metal bands," says Erza, who taught the girls the instruments and would go on to become their band manager. The band's music is inspired by the likes of metal music legends such as Slipknot, Lamb of God and Rage Against The Machine. The Girl Behind The Sparkle-Shooting Prosthetic Arm Is Just Getting Started.

While showing off the sparkle-shooting prosthetic arm that made her an internet sensation, 11-year-old Jordan Reeves has a glitter emergency. 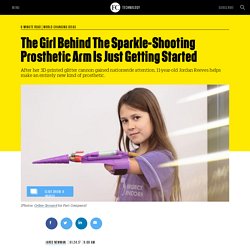 Over video chat from her home in Columbia, Mo., Jordan accidentally spills glitter all over her keyboard while loading the attachment. The importance of educating girls. Teen feminists changing the world in 2015. How Teen Rapper MC Soffia Is Using Hip-Hop To Empower Afro-Latinas. At the tender age of 11, Soffia Gomes da Rocha Gregório Correa has a whole lot to say. 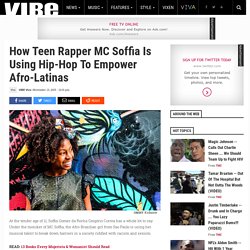 Under the moniker of MC Soffia, the Afro-Brazilian girl from Sao Paulo is using her musical talent to break down barriers in a society riddled with racism and sexism. READ: 13 Books Every Mujerista & Womanist Should Read It may seem like a dense topic for the youth, but MC Soffia commands the mic with stellar ease and confidence. Dharma Project - ollivander: micdotcom: Toronto teen fights back... Tessa Hill And Lia Valente, Grade 8 Activists, Say No To Sex-Ed Protests By Ontario Parents. This article is part of What's Working, a global HuffPost editorial initiative to go beyond "If it bleeds, it leads" and double-down on our coverage of people coming up with solutions to the very real challenges we face. 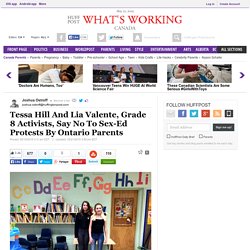 At first glance, Tessa Hill and Lia Valente might seem like your average 13-year-olds. Oh, except that the Doc Martin-wearing duo (Tessa rocks pink boots, Lia's sporting white) started a petition for a school project that got more than 40,000 signatures. And it led to a meeting with Ontario's premier. And they succeeded in getting the issue of consent included in the new sex-ed curriculum. Jae likes jackalopes, jonnytwoshoes: itscolossal: Photographer... Principal Blacks Out 13-Year-Old’s "Feminist" T-shirt In School Photo For Being "Offensive" UPDATE: as this story continues to evolve, we will share the updates. 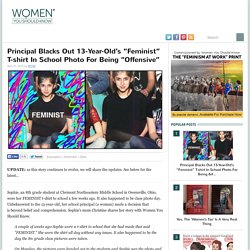 See below for the latest… Sophie, an 8th grade student at Clermont Northeastern Middle School in Owensville, Ohio, wore her FEMINIST t-shirt to school a few weeks ago. It also happened to be class photo day. Photos Of Kabul's Littlest Skaters Totally Shredding. Afghan women may not be able to ride bikes, but they can skateboard—and these girls could teach Tony Hawk a thing or two. 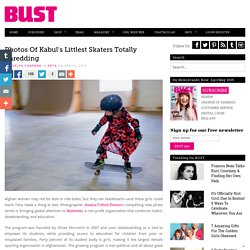 Photographer Jessica Fulford-Dobson’s compelling new photo series is bringing global attention to Skateistan, a non-profit organization that combines Kabul, skateboarding, and education. The program was founded by Oliver Percovich in 2007 and uses skateboarding as a tool to empower its students, while providing access to education for children from poor or misplaced families. Forty percent of its student body is girls, making it the largest female sporting organization in Afghanistan. Micdotcom: "Real Princess gives our members an... ✿ CHUBBY BUNNIES ✿, did-you-kno: The President addressed all of the... Students protest 'slut shaming' high school dress codes with mass walkouts. A spate of revolts against school dress codes appears to be gaining momentum across the United States, with students staging walkouts and other protests to complain at the way girls have been “humiliated” and forced to cover up. 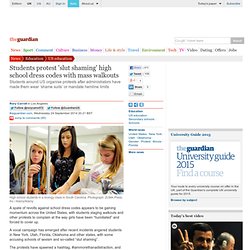 A vocal campaign has emerged after recent incidents angered students in New York, Utah, Florida, Oklahoma and other states, with some accusing schools of sexism and so-called “slut shaming”. The protests have spawned a hashtag, #iammorethanadistraction, and expressions of support from some parents who say the application of dress codes can be capricious and unjust. “I do think these protests are a trend and I think it’s a good trend,” said Ruthann Robson, a City University of New York law professor and author of Dressing Constitutionally: Hierarchy, Sexuality and Democracy. The mass walkouts showed that dress codes related to public policy and were not just confined to individual students and schools, she said. “It was embarrassing and degrading to them. Rebel Girls: Youth Activism and Social Change Across the Americas - Jessica K. Taft. 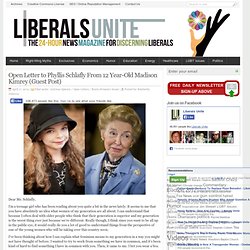 Schlafly, I’m a teenage girl who has been reading about you quite a bit in the news lately. It seems to me that you have absolutely no idea what women of my generation are all about. I can understand that because I often deal with older people who think that their generation is superior and my generation is the worst thing ever just because we’re different. Girl_scout_sets_up_outside_of_local_weed_shop_sells_lots_of_cookies. By Jamilah King Friday, February 21 2014, 3:54 PM EST. 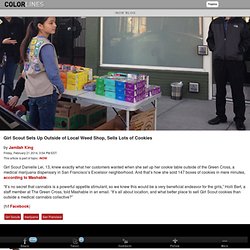 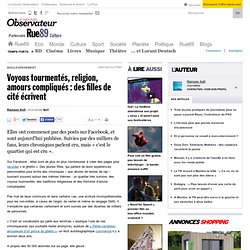 Tea and Feminism. 3 Girls Smash Gender Roles to Smithereens in Toy Company's Glorious Debut Ad. One of the most anti-feminist songs of the 1980s, "Girls" by the Beastie Boys, is recast as an empowering theme for young women in a new toy ad looking to break gender stereotypes. The spot is a holiday promotion for GoldieBlox, a construction-themed board game that nearly doubled its Kickstarter goal in 2012. Game developer Debbie Sterling designed GoldieBlox to combine young girls' love of reading and characters with the engineering themes of toys typically more popular with boys, like Legos and erector sets.

Girl Be Heard. Jezebel. My 17-Year-Old Daughter Had a Dream to Become a Model. She Also Has Down Syndrome. Wet Seal Made Her Dream Come True. When I received the prenatal diagnosis that my baby had Down syndrome, my world came to a skidding halt. My mother wisely let me cry for about 20 minutes, then asked me what had changed. I remember telling her everything had changed. Then she said the words that would set the stage for how my daughter would be raised. Unfit For Product Placement: Radicalizing the Cartoon Characters Of Our Childhoods. Want to know where a safe place is? Young On Youtube. 5 ways a 14-year-old crushed an arrogant interviewer. This story originally ran on PR Daily in August 2013. If everybody performed in interviews like 14-year-old Rachel Parent, I would be out of a job.

The young Canadian activist founded an organization called “The Kids Right To Know,” which campaigns for mandatory labeling of foods containing genetically modified organisms (GMOs). She has organized and spoken at rallies against GMOs and just happens to be one amazing spokesperson. Here’s the proof: Parent challenged investor and TV host Kevin O’Leary to a debate after he called GMO protesters “just stupid” and suggested on his show that they “stop eating” as a way to “get rid of them.” O’Leary accepted, and last week Parent was a guest on the show he co-hosts, “The Lang & O’Leary Exchange,” from the Canadian Broadcasting Corporation (CBC). High School Feminism Students Address School Sexual Harassment at UN Commission on Status of Women « Feminist Teacher. My high school feminism students, Josey Stuart and Noel Diggs, (front) and Emily Morenike Carpenter from Girls for Gender Equity spoke on a panel addressing the findings in the AAUW report, Crossing the Line: Sexual Harassment at School.

(photo credit: Ileana Jiménez). This year’s 57th session of the UN Commission on the Status of Women taking place currently in New York from March 4-15 is focusing on the elimination and prevention of all forms of violence against women and girls with a particular focus on the equal sharing of responsibilities between women and men. As part of a series of UN parallel events taking place in various venues was a panel sponsored by the AAUW (American Association of University Women) highlighting the findings of their important study Crossing the Line: Sexual Harassment at School. 13-Year-Old Girl Asks Easy Bake Oven To End Sexist Ads: 'I Want My Brother To Know That It's Not Wrong' To Cook. Awesome Six-Year-Old Girl Writes to Hasbro About Gender Inequality in Guess Who. The Girl Scouts are taking over Congress: Tammy Baldwin and Elizabeth Warren are prepared. Photo by Robert MacPherson/AFP/Getty Images. Video: Skateistan teaches girls in Afghanistan how to skateboard. High school student, 17, pretends to be pregnant for senior project.

By Daily Mail Reporter Updated: 18:18 GMT, 22 April 2011. SPARK a Movement! (When we told Teen Vogue we wanted them to show...) A How-To on Youth Activism. If you want to read about some truly inspiring young feminists, pick up Hey, Shorty! A Guide to Combating Sexual Harassment and Violence in Schools and on the Streets, a collaboratively written book by Joanne Smith, Mandy Van Deven and Meghan Huppuch of Girls for Gender Equity (GGE). Youtube video: GAF shout out. Girls Ask Teen Vogue to Ditch Photoshop, Get Berated by Editor-in-Chief. Teen Girl Wins Photoshop Fight Against Seventeen Magazine. When Julia Bluhm scanned the pages of Seventeen magazine, she saw young women with perfect bodies.