Comment aborder les gens que l’on désire sans les harceler sexuellement? What Do We Do with the Art of Monstrous Men? What to Say Instead of 'I Know How You Feel' to Someone Who Is Struggling. A good friend of mine lost her dad some years back. 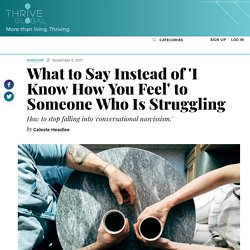 I found her sitting alone on a bench outside our work- place, not moving, just staring at the horizon. She was absolutely distraught and I didn’t know what to say to her. Yes, This Is a Witch Hunt. I’m a Witch and I’m Hunting You. - NYTimes.com. Breaking the Silence: 5 Ways to Support Survivors of Sexual Violence. June is recognized as National PTSD Awareness Month. 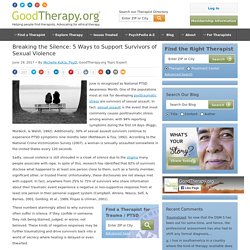 One of the populations most at risk for developing posttraumatic stress are survivors of sexual assault. In fact, sexual assault is the event that most commonly causes posttraumatic stress among women, with 94% reporting symptoms during the first 14 days (Riggs, Murdock, & Walsh, 1992). Additionally, 30% of sexual assault survivors continue to experience PTSD symptoms nine months later (Rothbaum & Foa, 1992). According to the National Crime Victimization Survey (2007), a woman is sexually assaulted somewhere in the United States every 120 seconds. Sadly, sexual violence is still shrouded in a cloak of silence due to the stigma many people associate with rape.

Am I Worth the Wait? Outside of Canada, Media has a Different Take on Ghomeshi. Canadians weren't the only ones watching last week's Ghomeshi verdict. 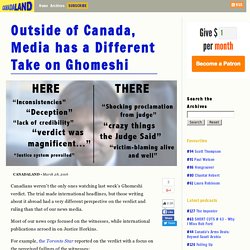 The trial made international headlines, but those writing about it abroad had a very different perspective on the verdict and ruling than that of our news media. Most of our news orgs focused on the witnesses, while international publications zeroed in on Justice Horkins. For example, the Toronto Star reported on the verdict with a focus on the perceived failings of the witnesses: Ditto for the Globe and Mail: Ghomeshi: pas assez de preuve, qu’est-ce que ça veut dire? Le 24 mars, le juge Horkins a déclaré Jian Ghomeshi non coupable des quatre accusations d’agression sexuelle et de l’accusation d’étranglement qui pesaient contre lui. 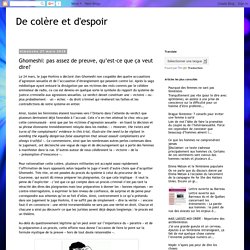 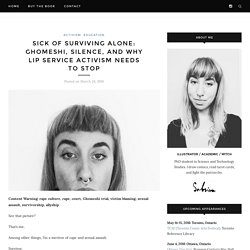 That’s me. Among other things, I’m a survivor of rape and sexual assault. Survivor. That word gets thrown around a lot. Survivor. I Didn't Say No — But It Was Still Rape. “You OK?” 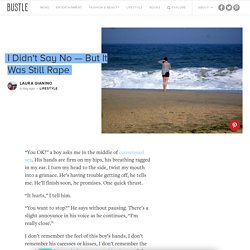 A boy asks me in the middle of consensual sex. His hands are firm on my hips, his breathing ragged in my ear. Jian Ghomeshi: now it gets ugly. Sexual assault charges against Jian Ghomeshi resulted in an outpouring of truth-telling and increased awareness of violence against women - or at least it did for a while. 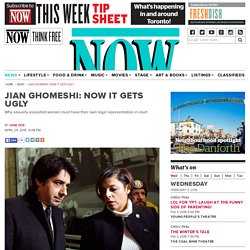 But if the past sexual and other histories of Ghomeshi's accusers in the upcoming pre-trial, which continues May 12, are used in cross-examination to discredit them, all of that will be undone. And don't think for a second that discrediting his accusers won't be part of Ghomeshi's legal strategy. It is accepted practice to do so, and any defence lawyer worth the money knows exactly how to do it. In a talk later quoted in Lawyers Weekly, How To Whack The Complainant Hard, celebrity lawyer Michael Edelson said: "…the preliminary inquiry is the ideal place in a sexual assault trial to try and win it all.

The Myth of the Teenage Temptress: Or Why A Young Girl Can Not Consent to Sex With An Adult Man. I started having sex with adult men when I was 13 years old. 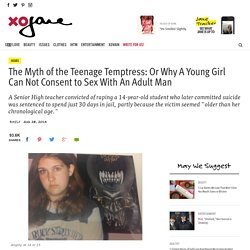 Neglected at home and ostracized at school, I found comfort in the sexual attentions of older men. Unlike boys my own age, who cruelly taunted me, older men were nice to me. Unlike my emotionally distant father, older men paid attention to me. They were grooming me, but to that chubby, attention-starved teenage girl, their attentions felt a lot like love. And so I created Prodigy chat rooms with names like "13yo girl home alone" and spent hours chatting and having phone sex with the men who would find me there.

I Named My Rapist On Facebook. I Wasn’t Prepared For What Happened Next. I sat down at the computer today in an unusually quiet house. 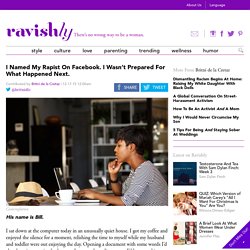 I got my coffee and enjoyed the silence for a moment, relishing the time to myself while my husband and toddler were out enjoying the day. Usetherightwords. Simple guide on sex assault reporting an eye opener: Porter. Zoom Lucia Lorenzi cried for a week after her image was broadcast across the country. She had been interviewed for a news story on campus sexual assaults at the University of British Columbia. Lorenzi is a perfect source: She is an academic expert on the subject, completing her PhD on sexual violence and silence; and she has a personal story. She was sexually assaulted by a fellow student four years ago. The interview was the first time Lorenzi spoke publicly about the assault, other than on her blog.

The interview lasted an hour, she says, but the clip of her was less than half a minute. OITNB Is the Only TV Show That Understands Rape. Grab a notebook, Game of Thrones. I’ve spent a week dragging my feet on writing about Pennsatucky’s two (two!) Heartbreaking rape scenes on Orange Is the New Black. Why do we shame victims rather than rapists? Another disturbing case of a teen’s sexual assault that was recorded, distributed, and the victim-shaming that followed. What would it take to move from a culture of victim-blaming to perpetrator-shaming? Of course, we are happy to ostracize sex offenders when we can see them as deviant strangers, as we do with sex offender registries, and that’s not productive. But when it’s an acquaintance, a boyfriends, a fellow partygoer, we pivot 180 degrees and blame the victim. There has to be a way to change this, so that when people learn about–or even see–a rape, the default, common reaction is to criticize the rapist, not the victim.

Rape victims shouldn't have to suffer in silence and keep their rapists' secrets. Less than a month after students at New York's Columbia University filed a complaint with the federal government alleging the school mishandled sexual assault cases, anonymous anti-rape activists are posting the names of alleged campus rapists on bathroom walls and flyers. I say more power to them – rapists deserve to be outed, and women deserve to be safe. The "rape list" first appeared in a woman's bathroom. After the school washed it off the wall, the activists posted the list again in different bathrooms around campus. After the school removed the lists again, printed flyers started popping up. Young Women See Sexual Assault as an Inevitability. A small but strikingly sad study set to appear in the journal Gender and Society next year finds that young women think that abuse, assault, and harassment at the hands of men is par for the course (via Think Progress).

Sociologist Heather Hlavka conducted 100 interviews with girls between the ages of 3 and 17, and found that they were so socialized to accept rape culture that they think that male abusers and harassers "can't help it. " Hlavka writes of her findings: "Objectification, sexual harassment, and abuse appear to be part of the fabric of young women’s lives. They had few available safe spaces; girls were harassed and assaulted at parties, in school, on the playground, on buses, and in cars. Overwhelmingly described as ‘normal stuff’ that ‘guys do’ or tolerating what ‘just happens,’ young women’s sexual desire and consent are largely absent. Sex was understood as something done to them.” Agression sexuelle – quand cesserons-nous de blâmer les victimes? Tytrape Je ne sais trop ce qui se passe sur internet ces jours-ci, mais il semble que tout le monde se soit donné le mot pour parler d'agression sexuelle... et blâmer les victimes.