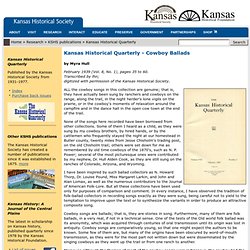 Transcribed by lhn; digitized with permission of the Kansas Historical Society. ALL the cowboy songs in this collection are genuine; that is, they have actually been sung by ranchers and cowboys on the range, along the trail, in the night herder's lone vigils on the prairie, or in the cowboy's moments of relaxation around the campfire and in the dance hall in the open cow town at the end of the trail. None of the songs here recorded have been borrowed from other collections. Some of them I heard as a child, as they were sung by my cowboy brothers, by hired hands, or by the cattlemen who frequently stayed the night at our homestead in Butler county, twenty miles from Jesse Chisholm's trading post, on the old Chisholm trail; others were set down for me as remembered by old time cowboys of the 1870's, such as N. I have been inspired by such ballad collectors as N. Cowboy songs are ballads; that is, they are stories in song. N. 05 Little Joe, the Wrangler.

04 Whoopie Ti-Yi-Yo, Get Along Little Dogies. 18 Jesse James. 05 The Old Chisholm Trail. 05 Billy The Kid. 17 The Streets Of Laredo. David Bromberg - Spanish Johnny. Narcocorrido. History[edit] This genre of music is the evolution of traditional corrido ballads of the Mexican-US border region, which stemmed from the 16th-century Spanish genre of romance. 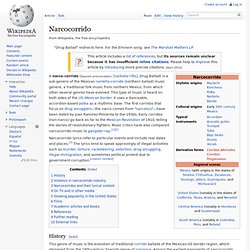 Among the earliest exponents of narcocorrido music were Los Alegres de Teran, who recorded many. In the 1980s, Rosalino "Chalino" Sánchez contributed to narcocorridos. Known throughout Mexico as "El Pelavacas" (Cow Skin Peeler), El Indio (The Indian, from his corrido "El Indio Sánchez"), and "Mi Compa" (My Friend), Chalino was a Mexican immigrant living in Los Angeles. He then began distributing his music for a sale price. Various companies, governmental agencies, and individuals have sought to ban narcocorridos. Violence in narcocorrido industry[edit] 12 Valentin Felix. 04 El Zorro De Ojinaga. Narcocorridos: The Balladeers of Mexico's Drug Wars. 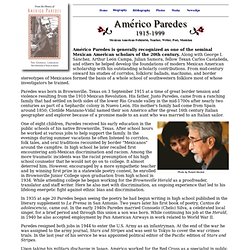 Along with George I. Sánchez, Arthur León Campa, Julian Samora, fellow Texan Carlos Castañeda, and others he helped develop the foundations of modern Mexican American scholarship with his outstanding scholarly contributions. From mid-century onward his studies of corridos, folkloric ballads, machismo, and border stereotypes of Mexicanos formed the basis of a whole school of southwestern folklore most of whose investigators he trained. Paredes was born in Brownsville, Texas on 3 September 1915 at a time of great border tension and violence resulting from the 1910 Mexican Revolution. 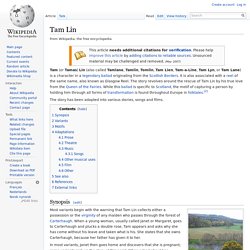 Synopsis[edit] Most variants begin with the warning that Tam Lin collects either a possession or the virginity of any maiden who passes through the forest of Carterhaugh. When a young woman, usually called Janet or Margaret, goes to Carterhaugh and plucks a double rose, Tam appears and asks why she has come without his leave and taken what is his. She states that she owns Carterhaugh, because her father has given it to her. In most variants, Janet then goes home and discovers that she is pregnant; some variants pick up the story at this point. She asks him whether he was ever human, either after that reappearance or, in some versions, immediately after their first meeting resulted in her pregnancy. In different variations, Tam Lin is reportedly the grandson of the Laird of Roxburgh, the Laird of Foulis, the Earl of Forbes, or the Earl of Murray. 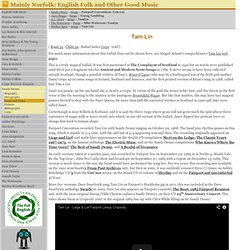