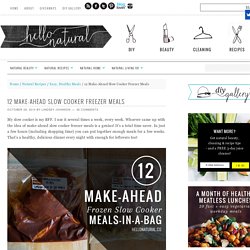 I use it several times a week, every week. Whoever came up with the idea of make-ahead slow cooker freezer meals is a genius! It’s a total time saver. 24 Easy Healthy Lunches To Bring To Work In 2015. Mac and Cheese Cheesecake - The Food in My Beard. Breadcrumb crust, cause obv. 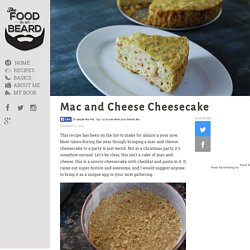 Cheddar in the mix with the usual soft cheeses. At first it's a little chunky... But after you add the egg and milk it smooths right out. Stir a well drained can of tomato in with the cooked pasta. Then dump in the cheese sauce. Sriracha Ranch Chicken. Our favorite chicken marinade is the Rosemary Ranch Chicken on the blog. 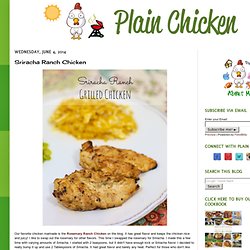 It has great flavor and keeps the chicken nice and juicy! I like to swap out the rosemary for other flavors. This time I swapped the rosemary for Sriracha. Bacon, Pear, and Raspberry Grilled Cheese. Bjork just officially declared this the best sandwich I’ve ever made. 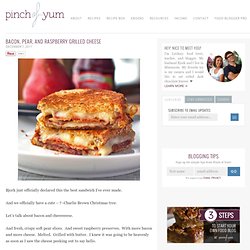 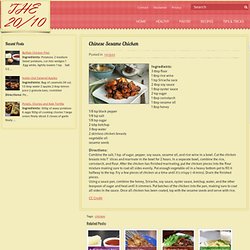 Cut the chicken breasts into 1″ slices and marinate in the bowl for 2 hours. In a separate bowl, combine the rice, cornstarch, and flour. After the chicken has finished marinating, put the chicken pieces into the flour mixture making sure to coat all sides evenly. Put enough vegetable oil in a heavy bottom pot to fill it halfway to the top. Mama: Inspired: Mass Crock Pot Dinners!

I did it again! 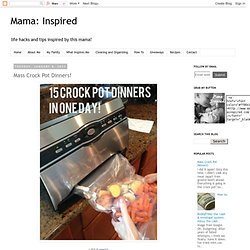 Only this time- I didn't cook any meat (apart from ground beef) ahead. Everything is going in the crock pot! So, it only took me 2.5 hours to create all of my dinners into individual bags. Honestly, 30 minutes included me trying to figure out how on earth to use my food saver system! All recipes are my own creation. Spicy Whole Roasted Cauliflower. Stuffed Pepper Casserole - A Kitchen Addiction. Grilled Mac n’ Beer Cheese Sliders with Bacon, Beer & Tomato Jam. Recipe TypeEntree Forget the cellophane-wrapped yellow squares, this grilled cheese uses mac n' cheese for its gooey filling. 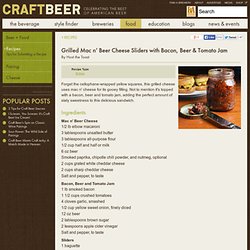 Killer Mac ’n’ Cheese — The Kitchen Alchemist. Not to be confused with pasta bake (the British student favourite) mac ’n’ cheese is lazy luxury of the highest order. 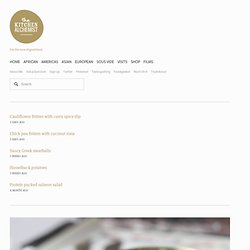 Making a good one in my book involves using lots of cheese, creating a rich and oozy sauce which is enhanced with a little English mustard and smoked paprika, and then cut through with a spot of vinegar. The result is a lightly smoky, peppery and rich cheese sauce with a bright and clean finish. All it then needs is a light breadcrumb topping. Et voila. Loaded Baked Potato and Buffalo Chicken Casserole. Just Cook It. 50 Tacos : Recipes and Cooking. How to heat taco shells and tortillas: Hard taco shells: Bake 4 minutes at 350 degrees F, or microwave 45 seconds. 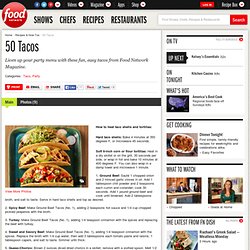 Soft 6-inch corn or flour tortillas: Heat in a dry skillet or on the grill, 30 seconds per side, or wrap in foil and bake 10 minutes at 400 degrees F. You can also wrap in a damp towel and microwave 1 minute. 1. Ground Beef: Sauté 1 chopped onion and 2 minced garlic cloves in oil. 2. 3. 4. Gnocchi Mac & Cheese. Ahhhh mac and cheese. 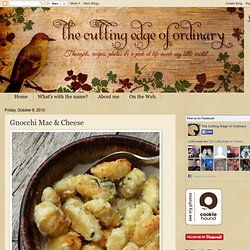 Those mere words stir up feelings of comfort...home....the food you loved as a kid. Just Cook It. Sausage Stuffed Shells Recipe with Spinach. After taking the photo for our sausage stuffed shells recipe, I scrambled into the kitchen to grab plates, knifes, forks and napkins — you know, like any normal person would do before sitting down to have a nice meal with their husband. Just as I was leaving the kitchen, I realized something.

I left the shells with Adam. Alone. How he did it, I’m not sure, but in the time it took me to go to the kitchen, grab our supplies and get back to him, he had finished at least half of the shells. Being someone who likes to look on the bright side of life, that made me think the recipe was a success and as Adam mentioned to me just after his last stuffed shell, hey, maybe we can say these are finger food! So, there you go. How to make Our Sausage Stuffed Shells Recipe with Spinach Our stuffed shells recipe is pretty simple. Now, on to the filling. Heat a large skillet over medium heat. General Tso’s Chicken. This recipe for General Tso's chicken has been the most popular on this site since I first posted it in 2009.

Month after month it continues to be the most viewed and searched for recipe here. Twice Baked Potatoes, Two Ways. Hiiii Abby!!! This blog post is dedicated to Abby. Crock Pot Buffalo Chicken Meatball Subs. Behind the Bites: Slow Cooker Chicken Tacos. During the holidays, most of us attend multiple gatherings.

Chances are at least one of those parties will be a potluck dinner. The first time I made a dish for a potluck was during my first Christmas living in New York City. My department at the Associated Press had a holiday gathering. I decided to make nacho dip. I started with taco meat, then added cheese. I took it to the party and the only person to try it was the one known as “the crazy old man” in the editorial art department. Chili Chicken. Chili Chicken 500 grams boneless chicken, cut into bite size pieces1 teaspoon red chili powder1 teaspoon pepper powder1/4 teaspoon turmeric powderTo taste, salt2 cups + 1 cup thin long onion slices4 green chilies cut into rounds1" piece ginger + 4 garlic cloves, chopped finely2 sprigs curry leaves2 tomatoes, chopped finely1/4th of a green capsicum, cubed1 tablespoon soya sauce + 1 tablespoon tomato sauce1/2 teaspoon sugar3/4 teaspoon pepper powderA handful to chopped coriander leavesSunflower oil, as requiredMethod:Marinate the chicken with chili powder, pepper powder, turmeric powder and salt and let it rest for at least 15 minutes.In a pan, heat a cup of oil (or as required to deep fry) to medium high.

Deep fry 2 cups of onion slices till they are brown. Japanese Beef and Rice Bowl (Gyudon) Low Calorie Chicken Recipes - Healthy Under 300 Calories Chicken Recipes. Black Pepper-Garlic Chicken. Gnocchi Mac and Cheese. March 4, 2011 | Print | E-mail | Filed under cheese, Italian, potato. General Tso’s Chicken. My friend Peng has been bugging me to make General Tso’s chicken for several months now. He lives in California and is really into the Asian-Mexican fusion thing, so he’s fixated on the idea of a General Tso’s burrito with fried rice and kimchi. Brats and Beer Cheddar Chowder. Baked Potato Soup. Baked Potato soup has been one of my favorite winter foods for so long now, I was surprised to discover I didn't already have the recipe posted here.