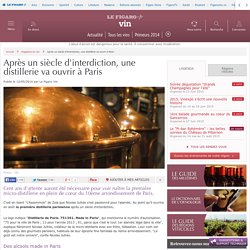 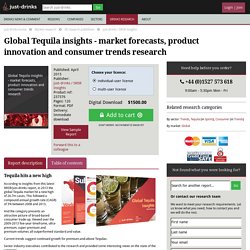 This followed a compound annual growth rate (CAGR) of 3% between 2008 and 2013. And the category presents an attractive picture of broad-based consumer trade-up. Escape to the Continent S01E06 Germany - Mosel Valley. Concise-Guide-to-Wine-chapter-4.pdf. Blind-Tasting-Sheet-1.pdf. Wine and blind tasting resources. How to organise a wine blind tasting Materials Six to twelve different winesStandardized unmarked bottles or receptacles in which to decant the wines (or bottle sleeves with which to mask the original wine bottles)A corkscrewA funnelMetal foil wine pourersISO wine tasting glasses, one per wine in each flightSpittoons (these can just be cups or jugs)Tasting sheets (see below)Crib sheets (see below)Some spare pens Method A typical blind tasting involves six to twelve different wines. 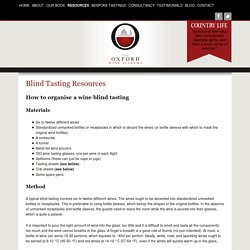 The wines ought to be decanted into standardized unmarked bottles or receptacles. It is important to pour the right amount of wine into the glass: too little and it is difficult to smell and taste all the components; too much and the wine cannot breathe in the glass. If there are twelve different wines, they may be presented in two flights of six, typically a flight of white wines followed by a flight of red wines. Each wine calls for five to ten minutes of analysis and ten minutes of discussion. 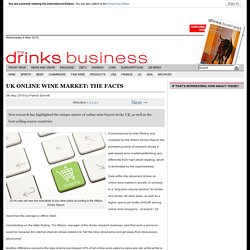 Data within the document shows an online wine market in growth, in contrast to a “long term volume decline” for bricks and mortar UK wine sales, as well as a higher spend per bottle of £6.89 among online wine shoppers – at least £1.20 more than the average in offline retail. Commenting on the latter finding, Tim Wilson, manager of the drinks research business, said that such a premium could be because the internet channel allows retailers to “tell the story about wine and get away from discussions about price”.

UK MARKET. Banke on that: Jackson Family Wines chairman and proprietor Barbara R. Banke. Looking more generally across the world of wine she says, “We are not after growth for growth’s sake,” qualifying, “We will grow for revenue, not volume.” 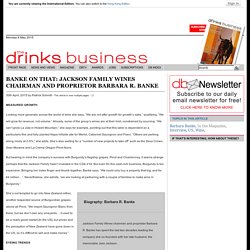 Already, some of the group’s wines are at their limit, constrained by sourcing: “We can’t grow La Jota in Howell Mountain,” she says for example, pointing out that this label is dependent on a particularly fine and fully planted Napa hillside site for Merlot, Cabernet Sauvignon and Franc. “Others are perking along nicely at 2-5%,” she adds. She’s also waiting for a “number of new projects to take off” such as the Zena Crown, Gran Moraine and La Crema Oregon Pinot Noirs. But bearing in mind the company’s success with Burgundy’s flagship grapes, Pinot and Chardonnay, it seems strange perhaps that the Jackson Family hasn’t invested in the Côte d’Or. 10 Paso Robles wineries to watch. 5th March, 2015 by Roger Morris But now attention has increasingly turned to Paso Robles, much like the strapping teenage son: full of potential, some already realised, more yet to come. 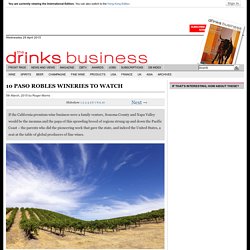 Located midway between Los Angeles and San Francisco, Paso Robles is a somewhat isolated region that spreads out from the town of the same name. It has vast flatland vineyards, mainly in the east, and rugged hillside plots, mainly in the western mountains separating Paso from the Pacific. In its landscape and isolation, a comparison to Languedoc is an obvious one.

For years, winemakers in the more populous northern counties prized Paso’s cornucopia of fruit. Paso locals like to say that they provide the “secret ingredient” for their upstate competitors. Many of these virtual wineries consist of only a ton or two of purchased fruit and a corner in someone’s winemaking facility. Top 10 wine brands 2015. 7th April, 2015 by Gabriel Stone As consumers in France, Spain and Italy cut back their wine consumption, often in favour of other drinks categories altogether, global sales are being propelled forward by countries whose embrace of wine is a relatively recent phenomenon. 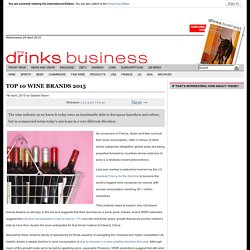 Last year marked a watershed moment as the US overtook France for the first time to become the world’s biggest wine consumer by volume with annual consumption reaching 29.1 million hectolitres. That certainly helps to explain why US-based brands feature so strongly in this list and suggests that their dominance is set to grow. Indeed, recent IWSR estimates suggest that US wine consumption is due to rise by 11% over the next three years, growth that would put this market’s total at more than double the level anticipated for that former hotbed of interest, China.

“Sales figures are based on a combination of data provided by the brand and industry estimates.