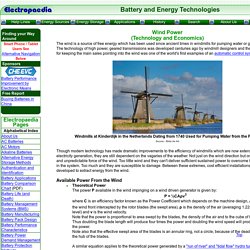 The technology of high power, geared transmissions was developed centuries ago by windmill designers and the fantail wheel for keeping the main sales pointing into the wind was one of the world's first examples of an automatic control system. Windmills at Kinderdijk in the Netherlands Dating from 1740 Used for Pumping Water from the Polder Source - Birds As Art Though modern technology has made dramatic improvements to the efficiency of windmills which are now extensively use for electricity generation, they are still dependent on the vagaries of the weather.

Enerji Enstitüsü. World Energy Consumption & Stats. Want to Build Your own SCADA? Here’s a Guideline. Whether you can’t find a pre-built SCADA package that suits your needs or you simply want to build it yourself to ensure future customizability, the build-your-own SCADA path is still an option today. 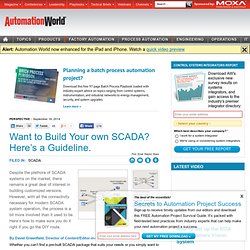 But the checklist of to-do items has certainly grown a lot longer with the need for interoperability, real-time readouts, and remote access. Nick Mudge, a software consultant at Perfect Abstractions and certified Inductive Automation SCADA integrator, says that the first steps in the process of building your own SCADA involve establishing the communications and data framework for the system. According to Mudge, the following functionality should be viewed as extremely useful for your self-built SCADA system, if not required: * Ability to talk to devices and PLCs and/or useOPC-UA. This is needed for real-time monitoring and control of equipment. * A sub-framework for use by third-party developers to implement communication protocols that are not provided by the framework. * Drawing tools.

Solar Roadways. Solar panels that you can drive, park and walk on. 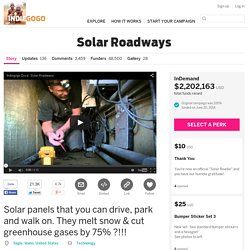 They melt snow & cut greenhouse gases by 75% ?!!! Solar Roadways will be featured this Saturday morning, February 14th on Innovation Nation on CBS with Mo Rocca. Here's a still shot from the show with Adam Yamaguchi on the Sandpoint Airport runway: a potential Solar Roadways pilot project for later this year. Adam Yamaguchi and Scott Brusaw We made President Obama's State of the Union Address - 2015! Julie and Scott in the White House's Blue Room. Solar Roadways made the list for 2014 - what an honor! We are excited to announce that Indiegogo has asked us to join their InDemand program: It allows teams to re-open their campaigns and continue raising funds for their projects. Altaeros Energies - Home. Automation.com - News & Resources for Manufacturing, Factory & Industrial Automation; Process Control; Motion Control & Instrumentation. Intelligent Energy – Powering Technology. Schneider CBUS DALI Control. Industrial Energy Management. 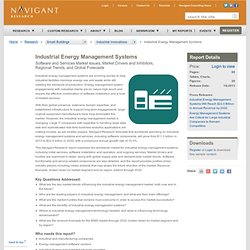 Energy management system engagements with industrial clients are by nature high-touch and require the effective combination of software installation and a host of related services. With their global presence, extensive domain expertise, and established infrastructure to support long-term engagements, large original equipment manufacturers have long dominated this market. However, the industrial energy management market is changing. Large IT companies with expertise in handling large data sets and sophisticated real-time business analytics applications are making inroads, as are smaller players.

Wireless power. The most common form of wireless power transmission is carried out using direct induction followed by resonant magnetic induction. Other methods under consideration are electromagnetic radiation in the form of microwaves or lasers[1] and electrical conduction through natural media.[2] Electric energy transfer[edit] An electric current flowing through a conductor, such as a wire, carries electrical energy. When an electric current passes through a circuit there is an electric field in the dielectric surrounding the conductor; magnetic field lines around the conductor and lines of electric force radially about the conductor.[3] In a direct current circuit, if the current is continuous, the fields are constant; there is a condition of stress in the space surrounding the conductor, which represents stored electric and magnetic energy, just as a compressed spring or a moving mass represents stored energy. Electromagnetic induction[edit] Electrodynamic induction method[edit]