Bill Mollison: Permaculture Activist - Sustainable Farming. Our recent interview with biointensive gardener John Jeavons— the California horticulturist who produces surprisingly high yields of vegetables on small parcels of land at his experimental mini-farm — outlined a frighteningly bleak future for agriculture and for food production in this country. 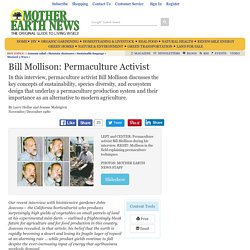 Jeavons revealed, in that article, his belief that the earth is rapidly becoming a desert and losing its fragile layer of topsoil at an alarming rate ... while product yields continue to fall despite the ever-increasing input of energy that agribusiness methods demand. And although this critical problem now occupies researchers and ecologists all over the world, it seems — at least up to this point — that only a few people (Jeavons among them) have been able to present feasible solutions to our current self-destructive system of commercial agriculture. Therefore, everyone here at MOTHER EARTH NEWS was excited to learn about permaculture activist Dr. Bill Mollison. MOLLISON: Oh yes! PLOWBOY: OK. Fandom powered by Wikia. Work with nature is one of the key principles of permaculture design Putting massive effort into attempting to ‘tame nature’, such as by damming valleys and flood plains or creating and maintaining bare soil by plough, is not only energy consuming, unsustainable and destructive, it is also unnecessary when we can meet the needs of people and the environment by working in harmony with, or even directly utilise, natural systems. 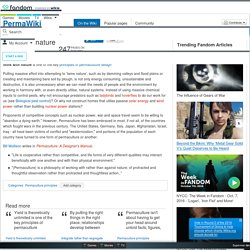 Instead of using massive chemical inputs to control pests, why not encourage predators such as ladybirds and hoverflies to do our work for us (see Biological pest control)? Or why not construct homes that utilise passive solar energy and wind power rather than building nuclear power stations? Proponents of competitive concepts such as nuclear power, war and space travel seem to be willing to "abandon a dying earth. " However, Permaculture has been embraced in most, if not all, of the countries which fought wars in the previous century. Permaculture principles. Permaculture isn't about having to get your head around untold facts, figures, Latin names and complicated techniques, rather it is about recognising universal patterns and principles, and learning to apply these ‘ecological truisms’ to our own gardens and life situations. 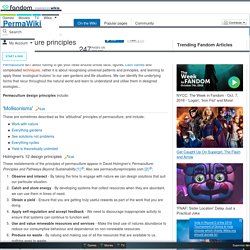 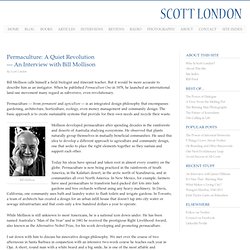 But it would be more accurate to describe him as an instigator. When he published Permaculture One in 1978, he launched an international land-use movement many regard as subversive, even revolutionary. Permaculture — from permanent and agriculture — is an integrated design philosophy that encompasses gardening, architecture, horticulture, ecology, even money management and community design.

The basic approach is to create sustainable systems that provide for their own needs and recycle their waste. Bill Mollison Mollison developed permaculture after spending decades in the rainforests and deserts of Australia studying ecosystems. Today his ideas have spread and taken root in almost every country on the globe. While Mollison is still unknown to most Americans, he is a national icon down under.

I sat down with him to discuss his innovative design philosophy. Bill Mollison: Yes, it was very perceptive. Mollison: It does. Bill Mollison. Bruce Charles 'Bill' Mollison (born 1928 in Stanley, Tasmania, Australia) is a researcher, author, scientist, teacher and Biologist. 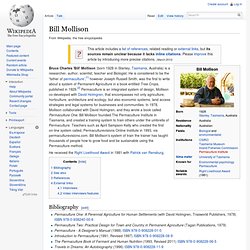 He is considered to be the 'father of permaculture',[1] however Joseph Russell Smith, was the first to write about a system of Permanent Agriculture in a book entitled Tree Crops, published in 1929.[2] Permaculture is an integrated system of design, Mollison co-developed with David Holmgren, that encompasses not only agriculture, horticulture, architecture and ecology, but also economic systems, land access strategies and legal systems for businesses and communities. In 1978, Mollison collaborated with David Holmgren, and they wrote a book called Permaculture One. Bill Mollison founded The Permaculture Institute in Tasmania, and created a training system to train others under the umbrella of Permaculture. He received the Right Livelihood Award in 1981 with Patrick van Rensburg. Bibliography[edit] Collection: Mollison's Permaculture Principles.