Proposed State of Deseret and the Compromise of 1850 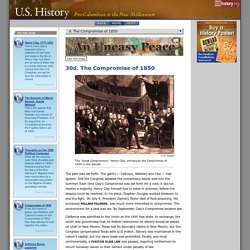 Senate The "Great Compromiser," Henry Clay, introduces the Compromise of 1850 in the Senate. The plan was set forth. The giants — Calhoun, Webster, and Clay — had spoken. Still the Congress debated the contentious issues well into the summer. California was admitted to the Union as the 16th free state. The Compromise of 1850 overturned the Missouri Compromise and left the overall issue of slavery unsettled. Compromise of 1850 Who won and who lost in the deal? Henry Clay, 1777-1852This is much less a biography than a collection of raw facts and dates in the life of Henry Clay, but there are so many of them this is a great resource. Report broken link. Compromise of 1850 - Facts & Summary. My TV provider is not listed. 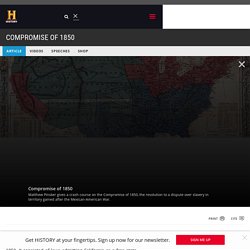 Why not? We are currently working on adding more TV providers. Please check back frequently to see if your TV provider has been added. Why do I need to log in to watch some video content? Viewers who verify their subscription to a TV provider get access to a deeper catalog of video content, including more full episodes. I am able to watch on TV. This service is only available through participating TV providers. Living History: Slaves arrived in Utah with Brigham Young - The Salt Lake Tribune. Three of the names are set just a little apart from the others under the subhead: Colored Servants. 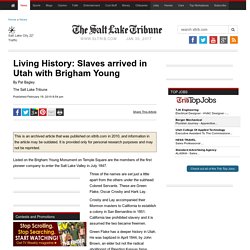 These are Green Flake, Oscar Crosby and Hark Lay. Crosby and Lay accompanied their Mormon masters to California to establish a colony in San Bernardino in 1851. California law prohibited slavery and it is assumed the two became freemen. Green Flake has a deeper history in Utah. He was baptized in April 1844, by John Brown, an elder but not the radical abolitionist of Bleeding Kansas fame. A trickle of blacks entered the state over the following years, both as freemen and in company with their masters. The real status of these "Colored Servants" became obscured over the years by apocryphal stories of blacks being offered their freedom, but devotedly choosing to remain with their "masters.

" Some are remembered in a newspaper article from 1899 as gazing at the snow-capped mountains surrounding the valley and wondering how -- oh how! Pioneers and Cowboys. Jeffrey D. 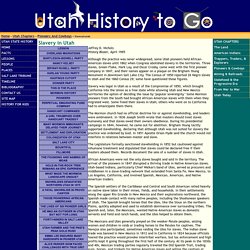 Nichols History Blazer, April 1995 Although the practice was never widespread, some Utah pioneers held African-American slaves until 1862 when Congress abolished slavery in the territories. Three slaves, Green Flake, Hark Lay, and Oscar Crosby, came west with the first pioneer company in 1847, and their names appear on a plaque on the Brigham Young Monument in downtown Salt Lake City. The area of Deseret started huge, got smaller as it became Utah. Editor's note: Imagine the "State of Deseret. 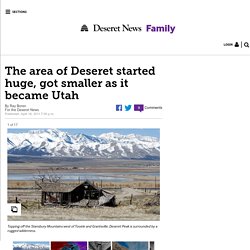 " Brigham Young and the Mormon pioneers who founded Great Salt Lake City 160-plus years ago did just that. Their vision encompassed a vast swath of today's American West. 3 Maps. Worlds Revealed: Geography & Maps at The Library Of Congress. By the end of 1847, the Church of Jesus Christ of Latter-Day Saints (LDS) had put down roots near the Great Salt Lake in present day Utah. 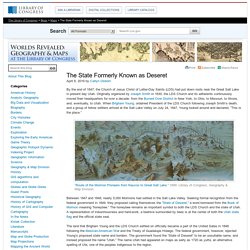 Originally organized by Joseph Smith in 1830, the LDS Church and its adherents continuously moved their headquarters for over a decade: from the Burned Over District in New York, to Ohio, to Missouri, to Illinois, and, eventually, to Utah. When Brigham Young, ordained President of the LDS Church following Joseph Smith’s death, and a group of fellow settlers arrived at the Salt Lake Valley on July 24, 1847, Young looked around and declared, “This is the place.” 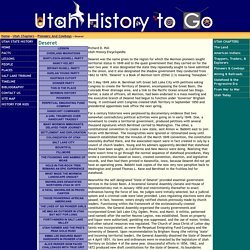 Poll Utah History Encyclopedia Deseret was the name given to the region for which the Mormon pioneers sought territorial status in 1849 and to the quasi government that they carried on for the next two year. It also designated the state they repeatedly sought to have admitted to the Union, and it also designated the shadow government they conducted from 1862 to 1870.

"Deseret" is a Book of Mormon term (Ether 2:3) meaning "honeybee. " On 3 May 1849 John M. For a century historians were perplexed by documentary evidence that two somewhat contradictory political activities were going on in early 1849.