SpaceX's Starman Just Did A Flyby Of Mars In His Tesla Roadster! Kids News Article. Zipping across the solar system in an electric car may seem like something straight out of a science fiction movie. 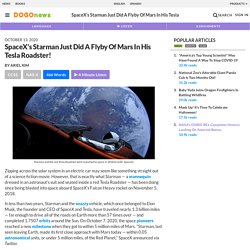 However, that is exactly what Starman — a mannequin dressed in an astronaut's suit and seated inside a red Tesla Roadster — has been doing since being blasted into space aboard SpaceX's Falcon Heavy rocket on November 5, 2018. In less than two years, Starman and the snazzy vehicle, which once belonged to Elon Musk, the founder and CEO of SpaceX and Tesla, have traveled nearly 1.3 billion miles — far enough to drive all of the roads on Earth more than 57 times over — and completed 1.7507 orbits around the Sun. On October 7, 2020, the space pioneers reached a new milestone when they got to within 5 million miles of Mars. "Starman, last seen leaving Earth, made its first close approach with Mars today — within 0.05 astronomical units, or under 5 million miles, of the Red Planet," SpaceX announced via Twitter. Where is Starman? Track Elon Musk's Tesla Roadster in Space! · Where is Starman? SpaceX's Endeavour Spacecraft Successfully Returns NASA Astronauts To Earth Kids News Article.

SpaceX's first-ever passenger flight to the International Space Station (ISS) ended successfully on August 2, 2020, when Crew Dragon Endeavour splashed into the Gulf of Mexico off the coast of Pensacola, Florida. 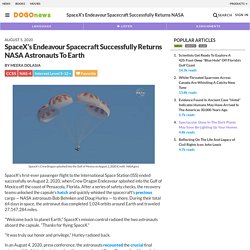 After a series of safety checks, the recovery teams unlocked the capsule's hatch and quickly whisked the spacecraft's precious cargo — NASA astronauts Bob Behnken and Doug Hurley — to shore. During their total 64 days in space, the astronaut duo completed 1,024 orbits around Earth and traveled 27,147,284 miles. SpaceX Launch - Classroom - BTN. For more than half a century Cape Canaveral in Florida has been a place where history was made and the weekend, people came here to the Kennedy Space Center to see another first. 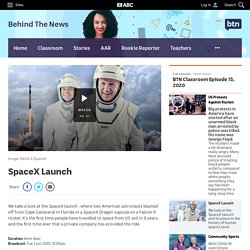 A SpaceX Crew Dragon capsule, carrying Bob Behnken and Doug Hurley to the International Space Station and launching us into a brand-new era of space exploration. Of course, it's not the first time people have gone into space. So why is this mission so important? Well, for starters, the United States hasn't launched its own astronauts in 9 years.

Not since the last flight of the space shuttle Atlantis. NASA decided to retire its space shuttles in 2011 because they were expensive to run and it had other priorities, like launching unmanned probes and planning a mission to Mars. Yeah, you've probably heard of him. SpaceX's Crew Dragon Successfully Delivers NASA Astronauts To The International Space Station Kids News Article. Astronauts aboard the International Space Station (ISS) are always thrilled to welcome new crew members to the orbiting laboratory. 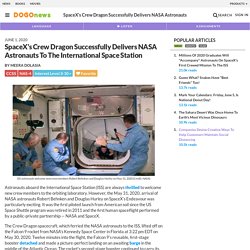 However, the May 31, 2020, arrival of NASA astronauts Robert Behnken and Douglas Hurley on SpaceX's Endeavour was particularly exciting. It was the first piloted launch from American soil since the US Space Shuttle program was retired in 2011 and the first human spaceflight performed by a public-private partnership — NASA and SpaceX. 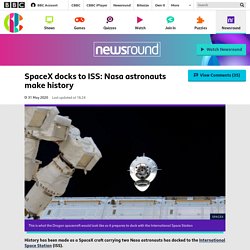 It's the first time that Nasa astronauts have been sent to space on a rocket owned by the privately owned company, SpaceX. The mission, dubbed Demo-2, launched from the Kennedy Space Centre in Florida on Saturday - the same launch pad used during the historic Apollo 11 Moon landings. The mission is important for future exploration, like the upcoming Artemis mission, which aims to put the first woman and next man on the Moon by 2024. To enjoy the CBBC Newsround website at its best you will need to have JavaScript turned on.

It has been nine years since astronauts last blasted off from American soil, Nasa stopped using their own space shuttles in 2011. Now Nasa will use SpaceX as a 'taxi' service to send people into space, rather than using their own rockets. SpaceX NASA flight ready for US lift-off headed to ISS. The launch of a SpaceX rocket with two NASA astronauts on a history-making flight has been rescheduled for Sunday 5.22am AEST*. 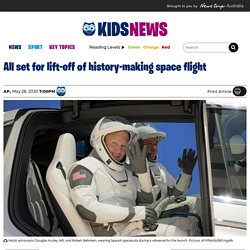 The flight was to lift off on Thursday morning Australian time but — with an estimated 1.7 million people watching online — was called off with less than 17 minutes to go in the countdown because of thunderclouds. The atmosphere was so electrically charged the spacecraft was in danger of getting hit by lightning. The spacecraft — designed, built and owned by SpaceX — will eventually blast off headed for the International Space Station, the first time a private company has been used for NASA astronauts. SpaceX: Nasa astronauts prepare for second launch attempt - CBBC Newsround.