Destiny 2 Forsaken guide: God rolls and the best perks for every weapon. Random rolls were a hotly requested feature for Destiny 2: Forsaken. 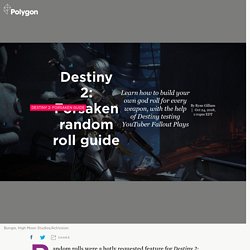 Bungie delivered with the recent expansion, turning each weapon drop into a potentially exciting piece of loot. But if you just want to jump in and play some Destiny 2 without crunching the numbers, random rolls can be scary and complicated. That’s where we come in. In this guide, we’re going to take a basic look — along with the help of Destiny YouTuber Fallout Plays — at what random rolls are, how they work and how you can learn to value your guns for yourself. And hey, if you just want a list of good perks and stats for your weapons, we’ve got that too. Random rolls matter because they allow you to find something that really works for you and fits your play style. Destiny UI — HUDS+GUIS. Destiny is a multiplayer first-person-shooter video game, developed by Bungie (the guys behind the Halo franchise), and the UI featured in the game has been gaining a bit of praise online lately. 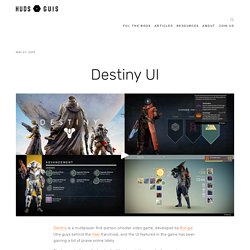 The two main things that make the UI unique is the use of a free moving cursor and the design aesthetic. For a long time, console games have favoured menus that require the user to navigate through options step by step, using the analogue stick or directional pad (D-pad). Destiny, however, introduces a cursor that the user can move freely around the screen.

David Kuelz's Blog - Narrative Design Tips I Wish I'd Known. The following blog post, unless otherwise noted, was written by a member of Gamasutra’s community. 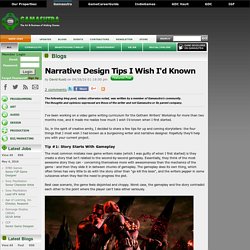 The thoughts and opinions expressed are those of the writer and not Gamasutra or its parent company. I've been working on a video game writing curriculum for the Gotham Writers' Workshop for more than two months now, and it made me realize how much I wish I'd known when I first started. So, in the spirit of creative amity, I decided to share a few tips for up and coming storytellers: the four things that I most wish I had known as a burgeoning writer and narrative designer.

Ryan Darcey's Blog - A Method For Creative Paper Map Design. The following blog post, unless otherwise noted, was written by a member of Gamasutra’s community. 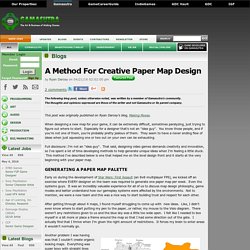 The thoughts and opinions expressed are those of the writer and not Gamasutra or its parent company. This post was originally published on Ryan Darcey's blog, Making Moves. When designing a new map for your game, it can be extremely difficult, sometimes paralyzing, just trying to figure out where to start. Especially for a designer that's not an "idea guy". You know those people, and if you're not one of them, you're probably pretty jealous of them. Ron Newcomb's Blog - Three Solutions to Three Problems in Interactive Fiction. The following blog post, unless otherwise noted, was written by a member of Gamasutra’s community. 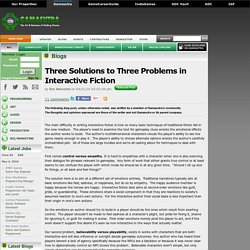 The thoughts and opinions expressed are those of the writer and not Gamasutra or its parent company. The main difficulty in writing interactive fiction is how so many basic techniques of traditional fiction fail in the new medium. The player's need to examine the text for gameplay clues wrecks the emotional effects the author works to build. The author's multidimensional characters clouds the player's ability to see the game clearly enough to play it. The player's ability to choose alternate options wrecks the author's carefully orchestrated plot. Lukasz Hacura's Blog - A few thoughts on game design methods. The following blog post, unless otherwise noted, was written by a member of Gamasutra’s community. 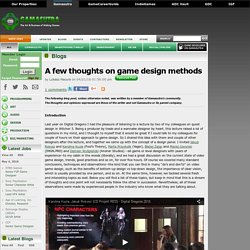 The thoughts and opinions expressed are those of the writer and not Gamasutra or its parent company. Introduction Last year on Digital Dragons I had the pleasure of listening to a lecture by two of my colleagues on quest design in Witcher 3. Being a producer by trade and a wannabe designer by heart, this lecture raised a lot of questions in my mind, and I thought to myself that it would be great if I could talk to my colleagues for couple of hours on their approach to game design.

So I shared this idea with them and couple of other designers after the lecture, and together we came up with the concept of a design panel. The design talk at Digital Dragons that inspired the panel Scope framework After preproduction, when you already have a pretty good idea of the story and the core mechanics of your game, it is time to determine the scope of the game. Fallback implementation Play your game. How The Witcher 3's card game within a game was brought to life. Last year’s The Witcher 3 gave players the opportunity to travel the Northern Kingdoms, slay monsters, delve into politics…and ask nearly every single person on the continent if they would like to play a round of Gwent. 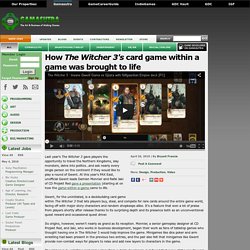 At this year’s PAX East, unofficial Gwent leads Damien Monnier and Rafal Jaki of CD Projekt Red gave a presentation (starting at on how the game-within-a-game came to life. Gwent, for the uninitiated, is a deckbuilding card game within The Witcher 3 that lets players buy, steal, and compete for rare cards around the entire game world, facing off with major story characters and random shopkeeps alike. It’s a feature that won a lot of praise from players shortly after release thanks to its surprising depth and its presence both as an unconventional quest reward and occassional quest driver. Its origins, however, weren’t nearly as grand as its reception. Josh Bycer's Blog - The Pros and Cons of CCG-based Game Design. The following blog post, unless otherwise noted, was written by a member of Gamasutra’s community. 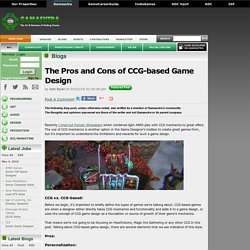 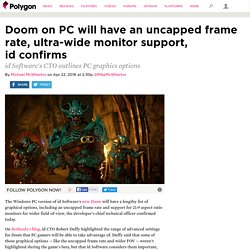 On Bethesda's blog, id CTO Robert Duffy highlighted the range of advanced settings for Doom that PC gamers will be able to take advantage of. Duffy said that some of those graphical options — like the uncapped frame rate and wider FOV — weren't highlighted during the game's beta, but that id Software considers them important, just like the PC gaming community. "PC gaming is in our DNA here at id," Duffy said. "Just like so many of you, we also love to tinker with settings to get the exact experience we want — and every ounce of performance our systems can handle. " 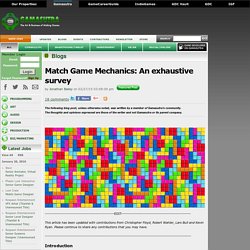 Here are a few other commonly used heuristics, from George Pólya's 1945 book, How to Solve It:[3]

Watch an untouched version of Alan Wake 2's prototype demo. Earlier this week, we ran a pop-up video walking viewers through the details of a never-to-be-released version of Alan Wake 2. The video was loaded up with interesting facts about the prototype, which may have also obscured some of the things you wanted to see without distraction. So, here's the video free of any such pop-ups.

Make sure you hop over to our full feature to read about how the prototype came about, why Microsoft passed on making the game and where it stands now. How does Blizzard create Hearthstone's incredible boss encounters? Ever since they were first introduced in last summer's Curse of Naxxramas add-on, we've been impressed by the single-player boss encounters in Hearthstone, a traditionally competitive multiplayer-focused game.

What's special about Hearthstone's bosses is not only that they're challenging encounters that force players to rethink strategies and often build completely new decks. But on top of functioning within this card game, they also work as clever throwbacks to raid and dungeon encounters from World of Warcraft, the MMO that Hearthstone is based on. This led us to wonder about Blizzard's approach to these complex fights. How does the developer create encounters that simultaneously fit the needs and balance of a card game and the necessities of lore and nostalgia? Motion Database HDM05. Mocap bip bvh animation for 3ds max and Character studio - Part 3. Cripple walk mocap bip bvh [wp_ad_camp_1] [embed] Cripple / handicapped person sitting on chair, gets up and starts to walk - motion capture bip and bvh ...

Mixamo’s Must-have Guide to Unity’s Mecanim System [Tutorials] Match 3 info. Quick Tips: Working with vertex colors. Working with vertex colors In this Design Unity Cookie Quick Tip, We will be discussing how we can paint vertex colors in Blender, Maya and 3Ds Max to use in Unity. Blender Starts at: 00:00, Max starts at 09:05, Maya starts at 07:10. Read ASAP. 1a080906c5d2c19e7fa40711ad0f8f64. Tips and Tricks: Rigging – Joint Orientation - Eyad's Blog. I specially wrote this “Tips & Tricks” for new character riggers who have confusion about joints orientation in Maya… So let’s get started :) If you create a joint in Maya, and then open its attributes, there are two important things, Rotate and Joint Orient.

When we start working on character rigs, we have to make sure that the Rotate values on X,Y,Z are always ZERO, why? Because the Joint Rotation values will be connected later to character controls and nodes, for example when you are ready to connect the hand control to the hand joint, you are completely sure that they have the same values, which are 0,0,0. The question is, how can we build a rig without changing the rotation values of the joints? Here the Joint Orient come to play its role, the joint orient specifies the orientation of the joint’s local rotation axis. Miracle Of Sound. Framed is Hideo Kojima's Favorite Game of 2014. This award-winning, noir puzzle game is Metal Gear Solid creator Hideo Kojima’s game of the year.

Hideo Kojima recently announced to the world that his favorite game of the year was the iOS puzzle title, Framed.