12-5.pdf. South Korea: Balancing Labor Demand with Strict Controls. Over the last four decades, the Republic of Korea (hereafter South Korea) has transformed from a struggling, developing nation to a prosperous, industrialized country thanks to its export-oriented strategy. 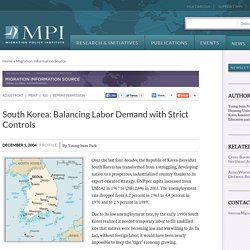 GNP per capita increased from US$142 in 1967 to US$12,646 in 2003. The unemployment rate dropped from 8.2 percent in 1963 to 4.4 percent in 1970 and to 2.5 percent in 1989. Due to its low unemployment rate, by the early 1990s South Korea realized it needed temporary labor to fill unskilled jobs that natives were becoming less and less willing to do. In fact, without foreign labor, it would have been nearly impossible to keep the "tiger" economy growing. As a country that places a high value on its homogeneity, this also marked the beginning of a tension that continues today: the need for foreign labor versus the desire to remain a purely Korean nation with strict immigration policies.

Historical Background. A revealing map of the world’s most and least ethnically diverse countries. Click to enlarge. 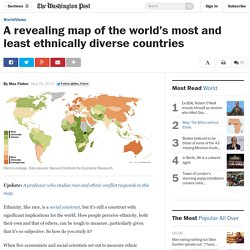 Data source: Harvard Institute for Economic Research. Update: A professor who studies race and ethnic conflict responds to this map. Ethnicity, like race, is a social construct, but it's still a construct with significant implications for the world. China's international students. China and other Asian countries lead the world in sending their youth overseas to study. 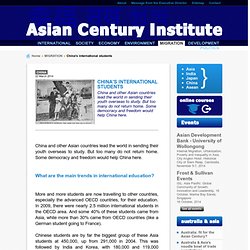 But too many do not return home. Some democracy and freedom would help China here. What are the main trends in international education? China's urbanization. The largest migration in world history is now taking place -- from Chinese rural to urban areas. 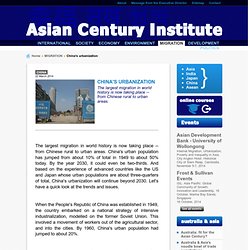 The largest migration in world history is now taking place -- from Chinese rural to urban areas. China's urban population has jumped from about 10% of total in 1949 to about 50% today. By the year 2030, it could even be two-thirds. And based on the experience of advanced countries like the US and Japan whose urban populations are about three-quarters of total, China's urbanization will continue beyond 2030. Canada's Asian migrants. My taxi driver is a civil engineer from Iran. 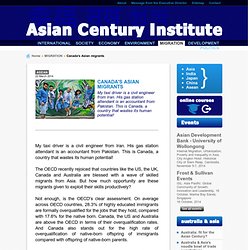 His gas station attendant is an accountant from Pakistan. This is Canada, a country that wastes its human potential! The OECD recently rejoiced that countries like the US, the UK, Canada and Australia are blessed with a wave of skilled migrants from Asia. But how much opportunity are these migrants given to exploit their skills productively? Singapore's migration dilemmas. Singapore has built its economic strength on the back of immigration. 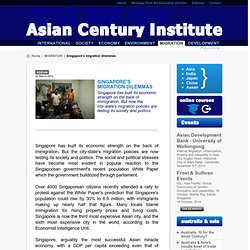 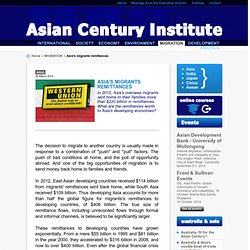 What are the remittances worth to Asia's developing economies? Asian migration to the West. The US, Canada, UK and Australia are blessed with a wave of skilled migrants from Asia, according to a recent OECD report. 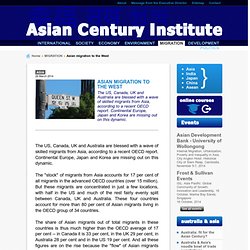 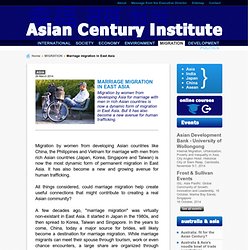 But it has also become a new avenue for human trafficking. Migration by women from developing Asian countries like China, the Philippines and Vietnam for marriage with men from rich Asian countries (Japan, Korea, Singapore and Taiwan) is now the most dynamic form of permanent migration in East Asia. India's migrants' remittances. Indians working abroad continue to send more money home than their counterparts from other countries. 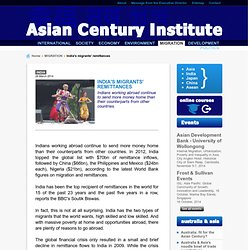 Indians working abroad continue to send more money home than their counterparts from other countries. In 2012, India topped the global list with $70bn of remittance inflows, followed by China ($66bn), the Philippines and Mexico ($24bn each), Nigeria ($21bn), according to the latest World Bank figures on migration and remittances. India has been the top recipient of remittances in the world for 15 of the past 23 years and the past five years in a row, reports the BBC's Soutik Biswas.

In fact, this is not at all surprising. Managing international labour flows from India. A holistic approach is necessary for managing international labour flows from India, argues Rakkee Thimothy, from the V.V. Giri National Labour Institute in India. Astute diplomatic interventions by the Indian government have been successful in bringing back thousands of stranded migrant workers recently from crisis-hit Iraq. As the crisis and the subsequent evacuation exercises unfold, a similar incident from the recent past returns to our collective memory—the evacuation of 140,000 Indian migrants from Kuwait, following the Iraqi invasion, in August 1990.

By no means does this imply that the intervening period provided a perfectly secure and stable situation for Indian emigrants in the Middle East. Despite all these instabilities, migration of workers from India to the Middle East, particularly to the Persian Gulf, continues unabated. Improving the Database on International Migration. Asia's wasted migration opportunities. Older, labor-scarce Asian countries like Japan, Korea and Taiwan are wasting migration opportunities from their younger, labor abundant Asian neighbors. During the recent decades of globalization, Asia's emerging and advanced economies have seen international trade, investment and finance represent ever growing shares in their economies, as have the advanced countries of North America and Europe. Malaysia's abuses of migrants' rights. Malaysia receives many migrants from Indonesia, Bangladesh, Nepal, Myanmar and Cambodia.

Sadly, many suffer deplorable migrants' rights abuses. Malaysia is one of a few Asian countries that has growing and important numbers of both emigrants and immigrants. Skilled Malaysians and students leave to countries like Australia, US, UK and Canada, with advanced and prosperous economies, and with democratic political systems and respect for human rights. At the same time, over the past twenty years, the number of foreign workers in Malaysia rose by 340% to reach 1.8 million in 2010.

Sources of Basic Human Rights Ideas: A Christian Perspective. 4:00 p.m. University of Chicago Divinity School Chicago, Illinois Dr. Building a ’Harmonious Society’ in China. Center for Strategic & International Studies Washington, D.C. During the past year, Chinese President Hu Jintao and the leadership of the Communist Party of China have emphasized “building a harmonious society” in the face of escalating social and economic challenges resulting from China’s rapid economic growth.

Is There a Global Resurgence of Religion? National Press Club Washington, D.C. Religion in a Globalizing World. Key West, Florida. Rising Tide of Restrictions on Religion. A rising tide of restrictions on religion spread across the world between mid-2009 and mid-2010, according to a new study by the Pew Research Center’s Forum. Among Muslims, Internet Use Goes Hand-in-Hand With More Open Views Toward Western Culture. Around the world, Muslims who use the internet are much more likely than other Muslims to have a favorable opinion of Western movies, music and television and are somewhat more likely to see similarities between Islam and Christianity, according to an analysis of a recent Pew Research Center survey.

Many religions heavily concentrated in one or two countries. Religious Diversity Around The World. Several years ago, the Pew Research Center produced estimates of the religious makeup of more than 200 countries and territories, which it published in the 2012 report “The Global Religious Landscape.” The effort was part of the Pew-Templeton Global Religious Futures project, which analyzes religious change and its impact on societies around the world. 6 facts about Christianity in South Korea. Pope Francis will travel to South Korea this week for Asian Youth Day, making his third international trip as pontiff. Chapter 3: Migrant Origins. Chapter 2: Migrant Destinations.