Healthy Recipes from Mindful Chef. The Oxford Symposium is the original conference for people with a broad interest in food. Held at St Catz in Oxford. The Healthy Foodie - Who says eating healthy has to be boring? Recipes. Welcome to Romy's Kitchen. Independent Blogs. A vegan baking blog. Supplemental #40. We don’t tend to get many recipes to suit a standard, basic, traditional Christmas dinner. 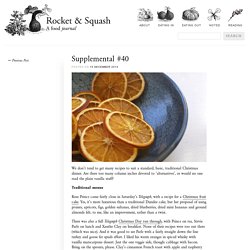 Are there too many column inches devoted to ‘alternatives’, or would no one read the plain vanilla stuff? Traditional menus. Food. Recipe Index « More Quiche, Please. Recipes. Recipes. Stonesoup — 5 ingredient recipes. The first time I tried going paleo there was one meal I really struggled with. 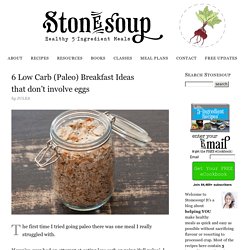 If you’ve ever had an attempt at eating low carb or going ‘full paleo’, I bet you’ve struggled with this too. Yep. Breakfast. Breakkie. Blog — Lizzie Kamenetzky. What's Gaby Cooking. F for Food. Aida Mollenkamp - Pairs Well With Food. Here in the Bay Area we’re seriously into food, so it’s only natural we look for an excuse to celebrate it as much as possible — last weekend’s SF Chefs Food and Wine was a chance to do just that. 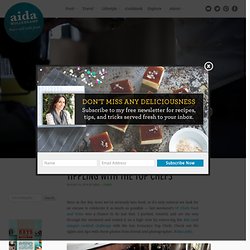 I partied, toasted, and ate my way through the weekend and ended it on a high note by emcee-ing the Mix (and mingle) cocktail challenge with the San Francisco Top Chefs. Check out the sights and sips with these photos from friend and photographer, Robin Jolin. Photography by www.robinjolin.com After a day of cooking challenges, tastings, and cooking demos at Union Square, we headed to the W Hotel where each of the Top Chef contestants from the Bay Area — Ryan Scott, Jennifer Biesty, Mattin Noblia, Erik Hopfinger, and Laurine Wickett — shake, stirred, and poured up their best concoctions. Search Recipes & Plan Your Meals. Recipes. Browse 339 Awesome Recipes Pumpkin Spice Tim Tam Cookies I’m slightly obsessed with Australia, but it tends to go in waves. 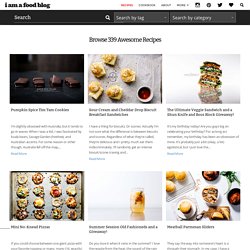 When I was a kid, I was fascinated by koala bears, Savage Garden (heehee), and Australian accents. For some reason or other though, Australia fell off the map,… Sunday Suppers. Serves 4 4 chicken legs. 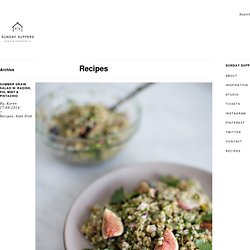 Bare ingredients: the foodie site for food lovers. Recipes Archives - The Adventures of MJ and Hungryman. Recipes & Food. This beautiful bounty of Sunday morning baking was based on the vegan banana bread in my first book, A Girl Called Jack, but uses some wholemeal flour and coconut oil for extra goodness. 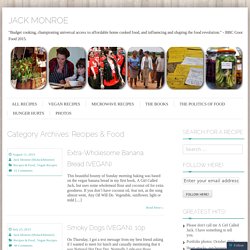 If you don’t have coconut oil, fear not, as the song almost went, Any Oil Will Do. Vegetable, sunflower, light or mild […]Read More » Dynamic Duos: Food Blogger Power Couples, Part 1. We love learning about culinary power couples, and after featuring food blogger stalwarts Sonja and Alex (A Couple Cooks) and Maria and Josh (Two Peas & Their Pod), we couldn’t help but dig around for some more. 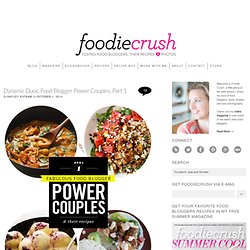 These dynamic duos have helped pave the way for additional fresh talent, proving the couple that cooks (or blogs, or food styles, or photographs) together stays together. Today’s post is the first of a two-part series. Circle back again next Wednesday to see the rest of the gang. And take this as truth, blogging isn’t just for one anymore. Adventures in Cooking. Recipe Index. Moore or Less Cooking Food Blog. My name is Jenny and my website is “In the Kitchen with Jenny.” 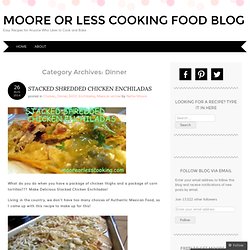 I met my husband in high school and we have been married for over 21 years. We live on dead end road on a farm just down the road from his family. 10 Best Food Blogs of 2014. Whether you like it or not, people talk about who’s hot and who’s not. 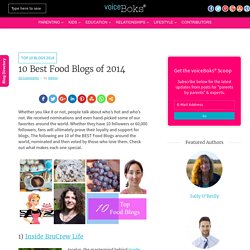 We received nominations and even hand-picked some of our favorites around the world. Whether they have 10 followers or 60,000 followers, fans will ultimately prove their loyalty and support for blogs. The following are 10 of the BEST Food Blogs around the world, nominated and then voted by those who love them. Check out what makes each one special. 2014 Nominations Week 3: Best Food Blog. Londons Best Burgers - Your guide to tracking down the best burger in London.

5/5 stars. Blog - young and foodish. London, 14 April - 4 August 2014 The BurgerMonday Championship is the Wimbledon of burgers, a single-elimination tournament pitting 8 burgers greats against one another in a series of Monday-night match-ups. 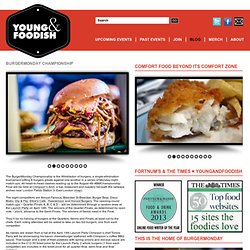 All head-to-head clashes leading up to the August 4th #BMChampionship Final will be held at Climpson’s Arch, a bar, restaurant and roastery beneath the railways arches near London Fields Station in East London (map). The eight competitors are Almost Famous, Bleecker St Bleecker, Burger Bear, Disco Bistro, Dip & Flip, Elliot’s Cafe, Hawskmoor and Honest Burgers. The opening-round match-ups – Quarter-Finals A, B, C & D – will be determined through a random draw at the Launch Party on April 14th. The winners of the Quarter-Finals, as determined by open vote – yours, advance to the Semi-Finals.

Dinner. Love Loretta's Kitchen. Burger Me! A London Burger Blog: [Special] Le Smokey, Byron Hamburgers. Hello Byron. It's been a while. That's a lie, I had one a couple of weeks ago. Actually, make that two in a week, a couple of weeks ago. Anyway that's not the point. Love Food Love Drink Magazine - World of Zing. Foodies 100 UK Food Blogs Index. Recipes. Main Courses. All Recipes. Recipes. 10 vegetarian and vegan blogs you need to know about. 1. 101 CookbooksOne of the grand dames of the blogosphere, Heidi Swanson began 101 Cookbooks in 2003 with the aim of working her way through her vast collection of books (that's where the 101 bit comes in).

Now, 11 years and one New York Times bestseller later, Heidi still cooks from her books, but it's her own wholegrain, vegetarian recipes that really shine. 2. Tinned TomatoesAlso known as the Scottish Vegetarian, Jaqueline cooks for her young son and vegan husband, while also running the Dundee branch of the Clandestine Cake Club, so her site is a great source for the sweet-toothed, vegetarian or not. She also does a great line in curries and pub grub – think roasted veg vindaloo and vegetarian haggis pasties. 3. 4. 5. 6. Gin and Crumpets. Main Dish.

Recipe Index. Anne's Kitchen: Main Courses. I am a bit of a naughty magpie for getting new spices and herbs, my poor kitchen cupboards are bursting at the seams from things like tubes of Harissa paste to tubs to Polish beetroot Borszcw powder and pretty much everything inbetween – as you can see by the random recipes competition late last year I have just a few random bags and tubs!).

When an email appeared in my inbox at the end of last year to try the new Bart Blends range I jumped at the opportunity to receive some to play with though making room has been a bit of a challenge! Since their arrival I have been playing with several of them and one of my favourites was this Tandoori Beef Kofta Masala I made – so much so that I’ve now used up all of my Tandoori Masala tin after recreating it several times!

Food Urchin. Marmaduke Scarlet. ROSIE LOVELL. About - Dirty Kitchen Secrets. Marhaba. That’s hello in Arabic. Pronounced midway, at the h, with a sound that can sometimes closely resemble the same sound one makes just before they whack you across the face with a lugi. It’s a beautiful language though, trust me. You can relax and take comfort in the fact that my name, Bethany, does not necessitate the same level of vocal cord exercise which means you’ll be able drop it often. March « 2014 « What Rachel Ate. A (photo) diary of our dinners. Things we make. Recipes. Recipes. Recipes Archives. The Hot Plate » Dish Type – One Pot Meals.

Vegetarian Recipes. Veggie Num Num’s Recipe Image Catalogue Find delicious recipes by browsing all of Veggie num num’s recipe images. Click on the image to open the recipe page… Om numnumnum { 3 trackbacks } Fuchsia Dunlop. Mondomulia - For lovers of food and photography. Utterly Scrummy Food For Families. Welcome to Shake Up Your Wake up. Vegetarian recipe food blog. Nutmegs, seven. Recipe Index. Recipes. Teriyaki meatball bowls. I don’t know what it is with me and meatballs lately… but here we go again! These are ridiculously easy and when you serve them over a bowl of hot jasmine rice, they’re pure heaven. The ingredient list might look long, but don’t let that scare you. They’re EASY. Many of the ingredients are just listed twice – once for the meatballs and then again for the glaze. I used ground pork for this recipe but you could certainly use ground turkey or chicken instead.

Recipes. Healthy Main Course Recipes for dinner and entertaining. Don't miss a recipe! One Pan. The Merry Gourmet Recipe Index » The Merry Gourmet. The Muesli Lover: porridge. Surroundings The Gallivant is in a peachy spot opposite Camber Sands in East Sussex, one of the largest expanses of beach in south-east England. Vast hummocks of wind-blown dunes have piled up behind the cusp of sandy beach and are colonised by coarse dune grasses and scrub in New England-meets-Farrow and Ball shades of soft green. Balmy weekends see queues stretching back from the car park entrance opposite the hotel for a mile from 8am with bathers keen to bag a good spot. Muesli Lover watched it develop from behind the sun-bleached shutters of the Gallivant's Beach Bistro.

Index of recipes. One Pot & One Pan. 2013 June. The Year In Food charts the course of the year through inspired, creative cooking and eating with an emphasis on seasonal fruits and vegetables.I'm a photographer and food blogger based in San Francisco, CA, currently at work on my first cookbook with Ten Speed, Vibrant. You can find me regularly at the Etsy blog and bonappetit.com.The Year in Food has been featured on Saveur's Sites We Love, Refinery29, Food52 News, The Kitchn's Breakfast With a Blogger, Babble's Family Kitchen, Food News Journal, Gourmet Live and elsewhere.All of the content on this website - the images, recipes and writing - is original content unless otherwise noted.