The 525-sq-m unisex fashion store Jill & Joy has been the leading fashion store of the Danish southwest for years and with it´s new and improved interior it takes the shopping experience to the next level. The store is designed with a simple typology mind-set, a U shaped form that encircles a double high room in the middle – the heart of the store. The U form is divided with the female department on the left side and the gentleman department on the right side – connected by the combined shoe and counter area. In the double high room, the heart of the store, the large impressive Unisex Jeans area is located.

All materials are chosen from their ability to express a high level of details and quality, which are also found in the garments. Galliano’s SS16 Statement. If we can identify a strong SS16 trend at this point – which, since we’re in the last and arguably most important leg of the fash-marathon I think we probably can – it would be the deconstructed reconstructed. 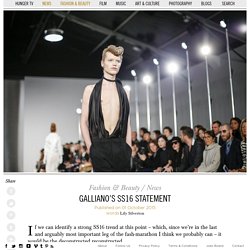 Taking something apart and putting it back together has long been a favourite of avant garde designers and design houses, and non more so than Maison Margiela, where yesterday morning, fashion’s man of the moment (second time round, after that great fall) showed us how it’s done. Galliano’s willingness to challenge fashion’s status quo is all the more interesting in the way it mirrors the legacy of Martin Margiela himself. Karl Lagerfeld’s new look for Chanel: feminist protest and slogans. Karl Lagerfeld, who once dismissed concerns over size-zero models as the whinings of “fat mommies with bags of crisps”, is an unlikely champion of feminism as a fashionable issue. 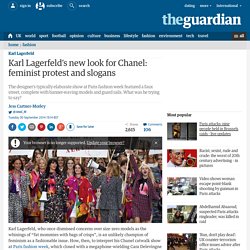 How, then, to interpret his Chanel catwalk show at Paris fashion week, which closed with a megaphone-wielding Cara Delevingne leading a model army chanting for freedom, the Kardashian-clan catwalk star Kendall Jenner holding a banner reading Women’s Rights are More than Alright, and a sea of placards reading Ladies First, History is Her Story, We Can Match the Machos and Boys Should Get Pregnant Too? It is probably worth remembering that one of Lagerfeld’s many quotes is: “Everything I say is a joke. I myself am a joke.” Photos: Mom photographs messy, fearless daughters to show “strong is the new pretty” Ben Bernanke was arguably the most powerful person in finance at the exact moment finance, essentially, broke. 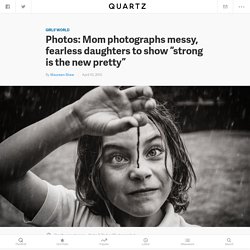 The institution he had led since 2006, the Federal Reserve, was the world’s most important central bank, with wide-ranging responsibilities influencing financial markets, financial institutions, global economic growth, and the US dollar. As such, he was at the center of the tension as the US financial system first bent under the growing load of bad mortgage loans, and ultimately fractured with the bankruptcy of US investment bank Lehman Brothers in September 2008.

Lehman’s collapse precipitated the worst financial crisis and recession in the US since the Great Depression of the 1930s. In his recent book, The Courage to Act, Bernanke writes about what it was like at the center of the storm. Quartz: One of the newsier bits to come out of your book was that you’re not a Republican any more, you’re now an independent. Kate T. Parker transforms candid images of her daughter's adventures into an empowering photo series celebrating girls' strength. Kate T. 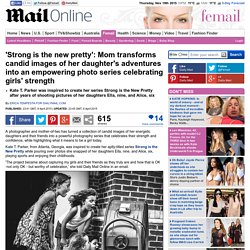 Parker was inspired to create her series Strong is the New Pretty after years of shooting pictures of her daughters Ella, nine, and Alice, six By Erica Tempesta For Dailymail.com Published: 23:41 GMT, 8 April 2015 | Updated: 23:45 GMT, 8 April 2015 A photographer and mother-of-two has turned a collection of candid images of her energetic daughters and their friends into a powerful photography series that celebrates their strength and confidence, while highlighting what it means to be a girl today.

Kate T. 'The project became about capturing my girls and their friends as they truly are and how that is OK -not only OK - but worthy of celebration,' she told Daily Mail Online in an email. Summer breeze: Atlanta-based photographer Kate T. Serious athlete: Kate snapped these pictures of her daughter Ella, nine, before her first triathlon (L) and while she was playing soccer (R) 'The images changed,' Ms Parker explained. Emma Watson at the HeForShe Campaign 2014 - Official UN Video.

4chan threatens to leak Emma Watson nudes after UN speech. Over the weekend, Emma Watson lit up the internet with a pretty amazing speech to the UN about women's rights. 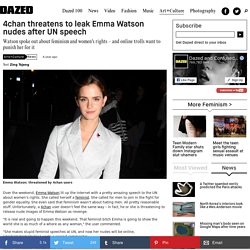 She called herself a feminist. She called for men to join in the fight for gender equality. She even said that feminism wasn't about hating men. All pretty reasonable stuff. Women In Technology: Why It's Good For Everyone. Equal Pay is 118 Years Away. The Global Gender Gap Report is in. 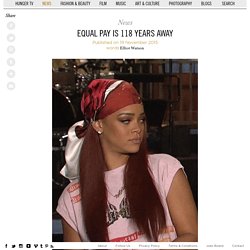 And it makes for grim reading. Whilst patrons of the patriarchy protest that progress is being made, the statistics show that women are only earning what men earned ten years ago. That particular statistic is published alongside the equally depressing line, “progress towards wage equality and labour force parity has stalled markedly since 2009/2010.” The United Feminists Webring. Kanye’s Yeezy Season 1 hits stores tomorrow. Kanye West’s YEEZY SEASON 1, the clothing line that he describes as for the “modern jet-set couple” hits stores tomorrow. 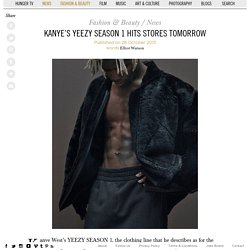 The collection, which is billed as the world’s first “solutions based” clothing line features a range of pieces that West intends for the wearer to interchange freely. Sophie Spinelle transforms real women into glamorous pin-ups for feminist photo series. San Francisco-based photographer Sophie Spinelle founded Shameless Photography in 2009The company offers a variety of photoshoot packages, which include pre-shoot sessions with a make-up artist and hair stylist By Charlie Lankston For Dailymail.com Published: 16:13 GMT, 21 January 2015 | Updated: 18:55 GMT, 21 January 2015 A photographer is challenging society's views about what makes a glamorous model by transforming real women into beautiful pin-ups. 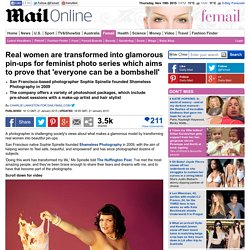 San Francisco native Sophie Spinelle founded Shameless Photography in 2009, with the aim of helping women to 'feel safe, beautiful, and empowered' and has since photographed dozens of subjects. 'Doing this work has transformed my life,' Ms Spinelle told The Huffington Post. How Ecofeminism Works. What would you do if you found out that all of the trees in your state were scheduled to be cut down? 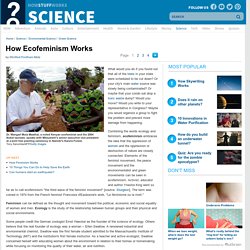 Or your city's main water source was slowly being contaminated? Or maybe that your condo sat atop a toxic waste dump? Would you move? Would you write to your representative in Congress? Every Curve Art Installation. Buckman’s ongoing body of work, Every Curve, explores the contradictory and complimentary influences of Feminism and Hip-Hop in her upbringing. The installation of hanging vintage lingerie reveals the artist’s fascination with femininity throughout time. The antique undergarments — relics from our past and windows into cultural ideas of female objectification — are reworked using musical text from a very specific time and place. Buckman hand-embroiders the lingerie with lyrics that refer to women from the iconic rappers Tupac Shakur and Notorious B.I.G. The text spans from the violent and misogynistic to the wholly sympathetic and pro-choice. Again...better be a feminist art-installation or something. Cuz otherwise...if women are just a collection of fun and useful body parts the owners …

Young, male and feminist – if only there were more of them. When I talk to boys and young men at school and university about why they don’t call themselves feminists, the answer is never “because I hate women”. Instead, they tend to express reservations about “female supremacy” or “man-hating”. There’s still a lot of confusion about the word. Can a man ever truly call himself a feminist? I felt pretty smug about myself for being such a modern sort of chap.

But I wondered if she would have been so quick to congratulate my feminist ways had she been present the many times a former colleague and I spent our lunch break gawking at pictures of Susannah Reid on the internet, or if she’d overheard some of the conversations bandied around the office when I worked for Loaded magazine. This, for me, is a big question: I absolutely understand and sympathise with the challenges women have faced - and continue to face - when it comes to equality. I believe in not defining someone by their gender, but as an individual. #BBCtrending: Swearing for feminism. First Wave Feminism: The Movement That is Taken For Granted. First wave feminists spent hundreds of years in activism, writing, protesting and working for the betterment and equality of their sex and gender. First wave feminists worked not only for suffrage, or the right to vote, but also for the right to an education, the right to work, the right to work safely, the right to the money they earned when they worked, the right to a divorce, the right to their children and the right to themselves and their own bodies.

Rights for women can be traced back to the Middle Ages in the Middle East when early reforms under Islam gave women greater rights in marriage, divorce and inheritance. First-wave feminism. How social media is changing the feminist movement. Rose McGowan slams Caitlyn Jenner for acceptance speech at Glamour awards. 'Tampon tax' paid around the world. What would be on our dream feminist school syllabus?

Are drag queens doing enough for feminism? Beyonce opens up on feminism, fame and marriage. Jennifer Lawrence Presses Case On Equal Pay For Actresses. Gender pay gap almost unchanged, says ONS. Image copyright Thinkstock The gender pay gap has changed "relatively little" over the past four years, the Office for National Statistics (ONS) has said. The gap between men and women's pay for full-time workers was 9.4% in April 2015, compared with 9.6% in 2014. While that was the narrowest difference since the figures were first published in 1997, there has been little change overall.

Since then the pay gap has remained at around £100 a week, the ONS said. According to its Annual Survey of Hours and Earnings (ASHE), men working full-time earn an average of £567 a week, while women earn £471. The TUC said that, at the current rate, it could be 50 years before men and women have pay parity. "Progress on closing the full-time gender pay gap has slowed dramatically over the last few years," said TUC general secretary Frances O'Grady. "If it continues to fall at this pace, we're looking at nearly half a century before we have pay parity between women and men. " Wage increases.

10 Kickass Things Emma Watson Said During The He For She Facebook Conversation. By Britt Julious 3/8/2015 Feminism is not just a trend for Emma Watson. As a UN Women Goodwill Ambassador, one of Emma’s biggest projects is working toward gender equality. She currently represents the UN HeForShe campaign, a solidarity movement of gender equality that wants men and boys to come together to help end inequalities toward women and girls. Yeezy Fall 2015 Ready-to-Wear Collection. Women in technology: no progress on inequality for 10 years. How equal are you? Robin Thicke - Blurred Lines [Feminist Parody] "Defined Lines" BBC 100 Women 2015: 10 men fighting for gender equality - BBC ... Fierce Empowering Photography : Amanda Moreno for Chanel. What's yours is mine: Forget boyfriend jeans - now more fashion labels than ever are launching unisex clothing lines.