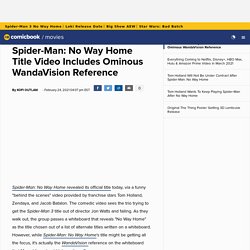 Spider-Man 3: First Images Show Tom Holland, Zendaya & Jacob Batalon. Fans have been wondering what the third Tom Holland-led Spider-Man film would be titled since it was announced by Sony and Marvel Studios. 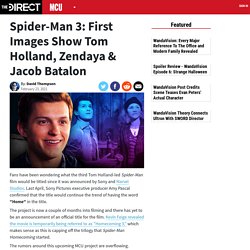 Last April, Sony Pictures executive producer Amy Pascal confirmed that the title would continue the trend of having the word "Home" in the title. The project is now a couple of months into filming and there has yet to be an announcement of an official title for the film. Spider-Man 3 Listing Teases Courtroom Scene & Possible Daredevil Appearance. The mystery surrounding Marvel Studios' Spider-Man 3 has been one of the main topics of discussion among MCU fans lately, and this was further amplified by the latest comments of the film's lead star, Tom Holland. 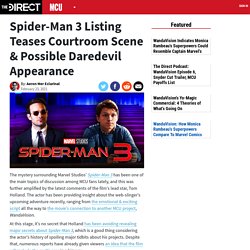 The actor has been providing insight about the web-slinger's upcoming adventure recently, ranging from the emotional & exciting script all the way to the movie's connection to another MCU project, WandaVision. At this stage, it's no secret that Holland has been avoiding revealing major secrets about Spider-Man 3, which is a good thing considering the actor's history of spoiling major tidbits about his projects.

Despite that, numerous reports have already given viewers an idea that the film will include the multiverse in a big way. Spider-Man 3: Could Venom and Morbius Be Joining the Movie? Spider-Man 3 is already shaping up to be a jam-packed affair. 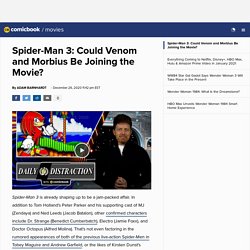 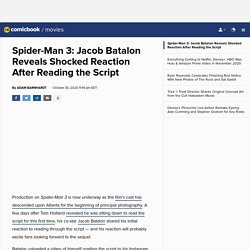 A few days after Tom Holland revealed he was sitting down to read the script for this first time, his co-star Jacob Batalon shared his initial reaction to reading through the script — and his reaction will probably excite fans looking forward to the sequel. Batalon uploaded a video of himself reading the script to his Instagram stories (don't worry, he just filmed in his face, so now spoilers are to be had) and the reading of the script left him speechless. As he finished reading, he was only able to muster an excited "No! " as he covered his mouth in excitement. Tom Holland’s Spider-Man 3 Likely Bringing Back An Important Collaborator - C... Twitter. Twitter. Spider-Man 3 Still on Track to Begin Filming in Atlanta This Year. How Jamie Foxx's Electro Return Could Lead to Marvel's Spider-Verse, X-Men & ...

Years ago, Marvel fans would have said that it would take capturing lightning in a bottle for Spider-Man to make his way over to the MCU. 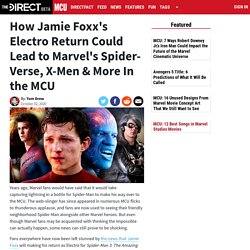 The web-slinger has since appeared in numerous MCU flicks to thunderous applause, and fans are now used to seeing their friendly neighborhood Spider-Man alongside other Marvel heroes. But even though Marvel fans may be acquainted with thinking the impossible can actually happen, some news can still prove to be shocking. Fans everywhere have now been left stunned by the news that Jamie Foxx will making his return as Electro for Spider-Man 3. The Amazing Spider-Man duology ended after lackluster box-office returns for a Spider-Man film, leaving everything that it set up in the dust. Fans never demanded nor expected a continuation of the film's characters, but Jamie Foxx reprising the role of Electro could see just that.

'Spider-Man 3' Jolt: Jamie Foxx Returning as Electro (Exclusive) Jon Watts, the filmmaker behind Homecoming and last year's Spider-Man: Far From Home, is in the director's chair for the third installment, which Sony has dated for Dec. 17, 2021 — although moviegoers have now come to expect release dates to change amid the coronavirus pandemic. 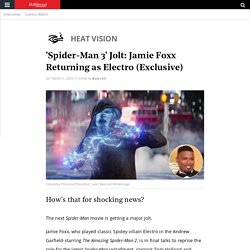 Most of the supporting cast from the previous movies — including Zendaya, Marisa Tomei, Jacob Batalon and Tony Revolori — are expected to be on the call sheet when cameras roll in Atlanta this fall. Kevin Feige and Amy Pascal are producing. Marvel had no comment. Marvel's Spider-Man 3 Will Bring Back Most of the Cast from Homecoming & Far ... News just broke that Jamie Foxx, who previously played Electro in The Amazing Spider-Man 2, will star in Spider-Man 3 as Electro. 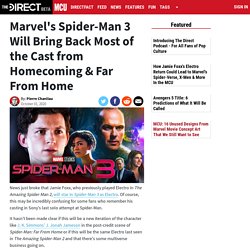 Of course, this may be incredibly confusing for some fans who remember his casting in Sony's last solo attempt at Spider-Man. It hasn't been made clear if this will be a new iteration of the character like J. K. Here Is How John Cena Could Look Like As Spider-Man Villain Sandman. Around this time next year, John Cena will be appearing as Peacemaker in James Gunn's The Suicide Squad. 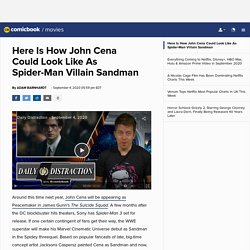 A few months after the DC blockbuster hits theaters, Sony has Spider-Man 3 set for release. If one certain contingent of fans get their way, the WWE superstar will make his Marvel Cinematic Universe debut as Sandman in the Spidey threequel. Based on popular fancasts of late, big-time concept artist Jacksons Caspersz painted Cena as Sandman and now, we can't see anyone else in the role. J.K. Simmons Has Filmed His Next Appearance as J. Jonah Jameson in the MCU - ... One of the best things about the Sam Raimi’s Spider-Man trilogy was definitely J.K. 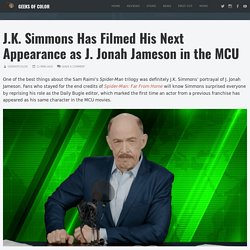 Simmons’ portrayal of J. Jonah Jameson. How Mysterio Evaded Death Itself in Spider-Man: Far From Home - MCU Direct. All fans of Marvel movies and comics alike can agree that there is nothing more irritating than a bad guy that just won’t quit. Even after being defeated, they just keep coming back, standing in the way of the greater good and creating havoc that the hero of the story has to put a stop to. The most irritating form of this occurrence is when the hero thinks he has killed the villain, just to find out that the villain is not only still alive, but was also working in the shadows to create a way to get rid of the hero for good. In an extremely annoying yet brilliantly clever sense, there is a character that constantly escapes death in Marvel comics, yet leads everyone to believe that he is in fact gone for good, and he goes by the name “Mysterio.” In the 2019 summer blockbuster, Peter Parker and his high school classmates traveled all across the world, trying to get away from the busy New York life but unluckily meeting mayhem at every stop on their trip.

Daredevil To Be Played By "Another Actor" In Spider-Man 3 If Rumors Are True,... In an exclusive report from Comicbook.com, Daredevil star Charlie Cox specifically addressed the circulating rumors of his potential appearance in the upcoming untitled Spider-Man 3. After starring as Matt Murdock on Netflix for three seasons, he gave these quotes when asked about his future: I hadn't heard those rumors, but it's certainly not with my Daredevil. I'm not involved in it... If that's true, it's not with me. It's with another actor. Marvel Moves Release Dates for Doctor Strange 2 and Thor: Love And Thunder - ... According to a new report from Deadline, Marvel Studios has moved the release date for two of its major sequels. Thor: Love and Thunder will now release on February 11, 2022, moving its theatrical debut one week ahead of schedule. Doctor Strange in the Multiverse of Madness has also moved ahead to March 25, 2022 after the news of the untitled Spider-Man 3 from Sony and Marvel Studios being delayed to November 5, 2021.

It seemed to be only a matter of time until news of this delay came out, especially considering the recent comments from Tom Holland casting doubt on when production will start. Crazy rumor claims ‘Spider-Man: Far From Home’ almost ruined Marvel’s MCU Pha... We’re two months away from the MCU Phase 4’s arrival. Black Widow will be the first title of the upcoming series of adventures, and Phase 4 will be richer than any of the previous stages thanks to Disney+. Marvel has six movies planned for the 2020-2021 period, and no less than eight distinct TV series that will tie into these films. And after the massive success of Avengers: Endgame, Marvel needs plenty of content to rebuild. New Avengers have to join the ranks of the current team, a team that’s already deprived of four heroes, including Iron Man and Black Widow, who died, Captain America, who retired, and Thor, who’s off-world with the Guardians.

We’re also in dire need of a big villain now that Thanos is dead, as well as a new main storyline. As I explained before, Far From Home isn’t perfect, especially when it comes to the plot. Marvel’s biggest leaker knows everything about Spider-Man 3, but he’s not spi... Phase 4 of Marvel’s Cinematic Universe has 14 different components, including six big Marvel movies and eight TV shows that will stream on Disney+ starting in August. The series will be interwoven with Marvel’s overarching storyline, and they’ll tie directly into some of the movies. But it’s the films that will mainly drive the story forward. Tom Holland's 'Spider-Man 3' Gets An Official Working Title. Tom Holland Says Sony Had a Really Wonderful Idea of How to Transition Spider... Spider-Man could be bisexual in an upcoming Sony movie.