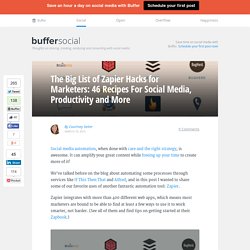 It can amplify your great content while freeing up your time to create more of it! We’ve talked before on the blog about automating some processes through services like If This Then That and Alfred, and in this post I wanted to share some of our favorite uses of another fantastic automation tool: Zapier. Zapier integrates with more than 400 different web apps, which means most marketers are bound to be able to find at least a few ways to use it to work smarter, not harder. (See all of them and find tips on getting started at their Zapbook.) First: How Zapier works In a nutshell, Zapier lets you create connections to push data from one app to another using triggers and actions. To set up an integration, you follow these steps: Define a trigger: The first event that instigates another action.

Proofpoint - Enterprise Email Security, Email Archiving, and Privacy Protection Solutions. As in general cybersecurity, a recurring theme in the social media security business is current event opportunists: hackers and scammers who feed on the popularity of high profile events like the Super Bowl™ to distribute threats to massive pools of potential victims. 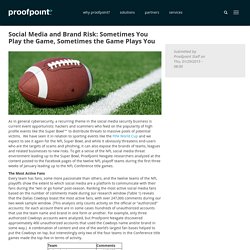 We have seen it in relation to sporting events like the FIFA World Cup and we expect to see it again for the NFL Super Bowl, and while it obviously threatens end-users who are the targets of scams and phishing, it can also expose the brands of teams, leagues and related businesses to new risks. To get a sense of the NFL social media threat environment leading up to the Super Bowl, Proofpoint Nexgate researchers analyzed at the content posted to the Facebook pages of the twelve NFL playoff teams during the first three weeks of January leading up to the NFL Conference title games.

Here is an example of a malware lure posted to an NFL Facebook page: Vanichi Magazine sur Twitter : "What If Guys Were Social Networks? #SocialMedia #PR #Art... What If Guys Were Social Networks? — Vanichi Magazine. Even though they share very similar functions and features, each social network has its own character and style: Facebook is depicted as casual; Twitter as classic; Pinterest as creative; LinkedIn as business; Instagram as vintage; Flickr as artsy; Tumblr as hip; and Google+ as innovative. 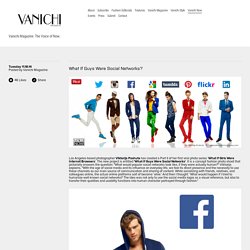 She adds, "Combining the visual elements of the logos, I then cast the models that would carry the 'spirit' of the social platforms and represent their essence. It may be subjective, but this is exactly what I imagined the networks would look like if they stepped down from the computer screens into the streets. Working closely with wardrobe stylist Jordan Anthony Swain (who is also Editor-in-Chief of Vanichi Magazine, as well as the model featured as Instagram) - together we finalized these looks, making sure we didn't overlook any important details to make these characters believable. Combien Twitter a-t-il payé le français Mesagraph? Linkfluence : Linkfluence annonce le lancement... Welcomes Gnip to the flock. Every day Twitter users share and discuss their interests and what’s happening in the world. 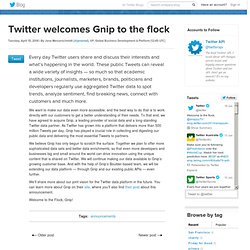 These public Tweets can reveal a wide variety of insights — so much so that academic institutions, journalists, marketers, brands, politicians and developers regularly use aggregated Twitter data to spot trends, analyze sentiment, find breaking news, connect with customers and much more. We want to make our data even more accessible, and the best way to do that is to work directly with our customers to get a better understanding of their needs. To that end, we have agreed to acquire Gnip, a leading provider of social data and a long-standing Twitter data partner.

As Twitter has grown into a platform that delivers more than 500 million Tweets per day, Gnip has played a crucial role in collecting and digesting our public data and delivering the most essential Tweets to partners. We believe Gnip has only begun to scratch the surface. StatistaCharts : #Social networking is a #mobile... How Mobile Are Social Networks? As mobile devices play an increasingly large role in our everyday media consumption, social networking was among the first activities to become mobile-first: However, some social networks are more mobile than others as our chart shows.While Instagram, Pinterest and Twitter are used almost exclusively on mobile devices, Facebook usage is more evenly distributed across devices. 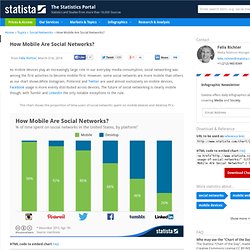 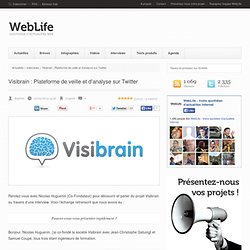 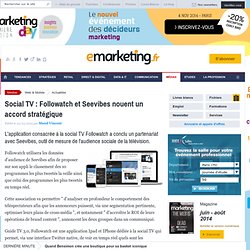 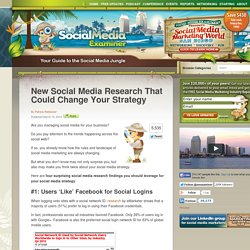 Do you pay attention to the trends happening across the social web? If so, you already know how the rules and landscape of social media marketing are always changing. Simply Measured Raises $20 Million to Expand Social Media Analytics and Reporting Solution. SOURCE: Simply Measured, Inc. 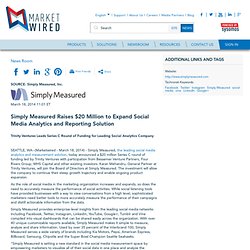 Trinity Ventures Leads Series C Round of Funding for Leading Social Analytics Company SEATTLE, WA--(Marketwired - March 18, 2014) - Simply Measured, the leading social media analytics and measurement solution, today announced a $20 million Series C round of funding led by Trinity Ventures with participation from Bessemer Venture Partners, Four Rivers Group, MHS Capital and other existing investors. Karan Mehandru, General Partner at Trinity Ventures, will join the Board of Directors at Simply Measured. The investment will allow the company to continue their steep growth trajectory and enable ongoing product expansion. As the role of social media in the marketing organization increases and expands, so does the need to accurately measure the performance of social activities. Are You Still Missing a Strategy for Negative Social Posts?

Social media marketing is hardly the new kid on the block anymore. eMarketer estimates that among US businesses with at least 100 employees, 87% used social media for marketing last year, and 88% will do so this year. 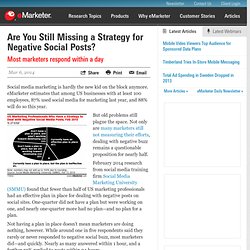 But old problems still plague the space. Not only are many marketers still not measuring their efforts, dealing with negative buzz remains a questionable proposition for nearly half. February 2014 research from social media training firm Social Media Marketing University (SMMU) found that fewer than half of US marketing professionals had an effective plan in place for dealing with negative posts on social sites.

One-quarter did not have a plan but were working on one, and nearly one-quarter more had no plan—and no plan for a plan. BeFwi : For US marketers, optimizing... Marketers Adopt Social Media Analytics Tools. The rise in social media analytics tools has satisfied marketer demand for a way to measure and gather insights from social marketing efforts. Nearly two-thirds of organizations in North America have adopted them, according to a January 2014 study by Demand Metric sponsored by NetBase.

And this group responded quickly to the release of such tools—over half of takeup had occurred in the previous two years. Now that they have them, how are marketing professionals using social media analytics tools for optimization? The top response among those polled by Demand Metric was campaign tracking (60%). This was followed by brand analysis (48%) and competitive intelligence (40%). Social media presence makes retailers appear less trustworthy. 29 Social Media Tools Recommended by the Pros.

Les salaires de 42 métiers en agence de publicité. The future of ownership in social media. Jump to navigation  Menu 🔊 Listen Tech Home page - 4-13. Social Media Divide Opinion among Institutional Investors. Although institutional investors have not yet been completely won over to using social media for professional purposes, the majority believe that in the future they will grow in importance as a source of financial and business information and as a professional communication channel While today only 30% of a sample of institutional investors worldwide regularly consult social media, these investors are increasingly using information from social networks on companies they (might potentially) invest in. These are the findings of a survey carried out by leading French financial communication agency Havas, in conjunction with AMO, the leading global network of strategic and financial communications consultancies.

The aim of the survey was to draw up a picture of social network usage for and influence on investor relations. Data Alliance partners w/ DataSift for global social data access. WPP operating companies will gain access to DataSift’s rich social data through a single interface NEW YORK — WPP’s (NASDAQ:WPPGY) Data Alliance and DataSift today announced a global data partnership enabling WPP companies to access data from the world’s leading social networks through DataSift’s platform. This partnership allows all WPP companies such as GroupM, Wunderman, Kantar, JWT and Cohn & Wolfe to access social data assets from more than 20 digital platforms, including Twitter, Tumblr and Facebook. The partnership will provide WPP companies with the enhanced ability to filter and contextualize social data through KBM Group’s I-Behavior Zipline DMPTM. Through the Zipline DMP, DataSift’s social data can be connected with a variety of WPP data assets including TV viewership, research panels, purchase, and consumer data from around the globe for insights, audience building and brand tracking.

Présence sur les réseaux sociaux : HootSuite se renforce et rachète UberVU. Social Media Content Optimization Survey. 2013 research: Ten jobs that will not exist ten years from now. In our previous Thinkopolis labour report, we featured a list of ten career paths than didn’t exist ten years ago. Now, through tracking online job posting titles on Workopolis, we’ve compiled a list of the top 5 job titles that appeared more frequently in 2013, and 5 previously common job titles that have been appearing less frequently. This gives us a sense of where employment may be heading in the year ahead and beyond. Which also has led us to this time predict ten jobs that will no longer exist ten years from now. Interestingly, one job makes both lists. It didn’t exist a decade ago – and will cease to exist a decade from now. BeFwi : Introducing 2 Step Login for... Introducing 2 Step Login for Buffer: The safest social media publishing on the web.

513 Flares Filament.io 513 Flares × You may have heard about the recent security breach that affected many Buffer users. This is something we would have hoped to never face in our lives. And yet, through the experience of the hack, we’ve had a unique opportunity to learn about security and safety on a level that we would have likely never explored before. On top of that, we were incredibly amazed by how supportive our customers (you!) Were through the whole process of recovery. With all that trust given to us, despite the big mess, we wanted to really step up our game in terms of safety and security.

BeFwi : #USA: The most popular... Not Every Social Network Doubles as a News Source. For many people, scrolling through their Twitter feed is the most convenient and easily customizable way to get the news they are looking for. Follow the right people and you won't miss many stories that matter to you. The same is increasingly true for Facebook, which has cleverly extended the functionality of its news stream over the years. Social Media Crisis: Home Depot Case Study. Last Thursday, Home Depot did some clean-up after an offensive tweet went out from their account. Sponsors of College GameDay on ESPN, the tweet was meant to drive some engagement and have some fun.