Two Year Community Colleges. Community College. Y. Millennials in relation to the previous generations. Generation Z. U.S. Wealth Gap Between Young, Old Is Widest Ever. WASHINGTON — The wealth gap between younger and older Americans has stretched to the widest on record, worsened by a prolonged economic downturn that has wiped out job opportunities for young adults and saddled them with housing and college debt. 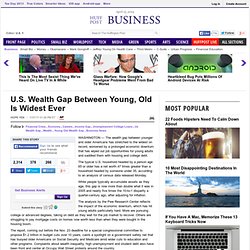 The typical U.S. household headed by a person age 65 or older has a net worth 47 times greater than a household headed by someone under 35, according to an analysis of census data released Monday. While people typically accumulate assets as they age, this gap is now more than double what it was in 2005 and nearly five times the 10-to-1 disparity a quarter-century ago, after adjusting for inflation. The analysis by the Pew Research Center reflects the impact of the economic downturn, which has hit young adults particularly hard.

More are pursuing college or advanced degrees, taking on debt as they wait for the job market to recover. Others are struggling to pay mortgage costs on homes now worth less than when they were bought in the housing boom. Move over Boomers! The Millennial Generation Has Occupied Wall Street. Boomers and Millennials: Who's Got It Worse in the Workplace? It’s the fight of a generation. 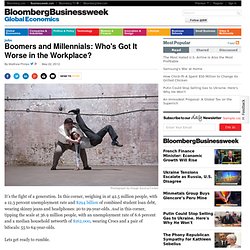 In this corner, weighing in at 42.5 million people, with a 12.3 percent unemployment rate and $294 billion of combined student loan debt, wearing skinny jeans and headphones: 20 to 29-year-olds. And in this corner, tipping the scale at 36.9 million people, with an unemployment rate of 6.6 percent and a median household networth of $162,000, wearing Crocs and a pair of bifocals: 55 to 64-year-olds.

Lets get ready to rumble. This isn’t exactly what’s happening in the jobs arena. More accurately, generations are fighting each other from within for work. A recent report by the Government Accountability Office comes down on the side of easing the plight of older workers, more than 50 percent of whom have actively sought a job for more than half a year. Yet there’s evidence that the real jobs crisis is taking place a generation or two down the food chain.

That has far-reaching consequences. The Generation Gap Is Back. IN a partisan country locked in a polarizing campaign, there is no shortage of much discussed divisions: religious and secular, the 99 percent and the 1 percent, red America and blue America. 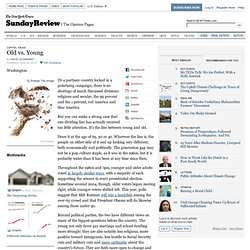 But you can make a strong case that one dividing line has actually received too little attention. It’s the line between young and old. Draw it at the age of 65, 50 or 40. Boomers and Millennials: Who's Got It Worse in the Workplace? Move over Boomers! The Millennial Generation Has Occupied Wall Street. Millennials: The Greatest Generation or the Most Narcissistic? - Jean Twenge. Popular books have argued that today's 20-somethings are more service-oriented than any generation since World War II. 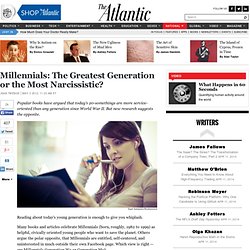 But new research suggests the opposite. Supri Suharjoto/Shutterstock Reading about today's young generation is enough to give you whiplash. Many books and articles celebrate Millennials (born, roughly, 1982 to 1999) as helpful, civically oriented young people who want to save the planet. Others argue the polar opposite, that Millennials are entitled, self-centered, and uninterested in much outside their own Facebook page. The first books written about Millennials were not just positive but glowing. Millennials Rising was published in 2000, when the oldest Millennials were just 18. In the years that followed, numerous books and news reports emphasized Millennials' desire to help others, become involved in politics and government, and work toward improving the environment.

My co-authors and I decided to find out. Millennials Screwed b/c of Irresponsibity of Boomers. Young People in the Recession - The War Against Youth. Published in the April 2012 issue Twenty-five years ago young Americans had a chance. 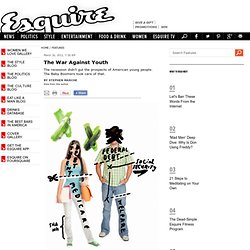 In 1984, American breadwinners who were sixty-five and over made ten times as much as those under thirty-five. The year Obama took office, older Americans made almost forty-seven times as much as the younger generation. This bleeding up of the national wealth is no accounting glitch, no anomalous negative bounce from the recent unemployment and mortgage crises, but rather the predictable outcome of thirty years of economic and social policy that has been rigged to serve the comfort and largesse of the old at the expense of the young. Since the beginning of the Industrial Revolution, human potential has been consistently growing, generating greater material wealth, more education, wider opportunities — a vast and glorious liberation of human potential.

Nobody ever talks about generational conflict. The gerontocracy begins at the top. David Frum, former George W. 6 Career Networking Tips for Millennials. Does the idea of networking sound forced and unnatural? 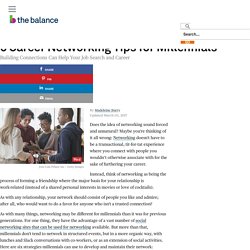 Maybe you're thinking of it all wrong: Networking doesn't have to be a transactional, tit-for-tat experience where you connect with people you wouldn’t otherwise associate with for the sake of furthering your career. Instead, think of networking as being the process of forming a friendship where the major basis for your relationship is work-related (instead of a shared personal interests in movies or love of cocktails). As with any relationship, your network should consist of people you like and admire; after all, who would want to do a favor for anyone who isn't a trusted connection? Top 10 Communication Skills for Workplace Success. The ability to communicate effectively with superiors, colleagues, and staff is essential, no matter what industry you work in. 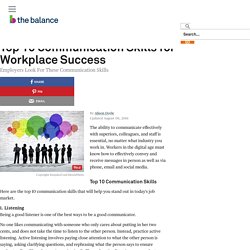 Workers in the digital age must know how to effectively convey and receive messages in person as well as via phone, email and social media. Top 10 Communication Skills Here are the top 10 communication skills that will help you stand out in today's job market. PWBPLN.