NPR Choice page. U.S. measles outbreak raises questions about immunity in adults. By Julie Steenhuysen (Reuters) - Adults in the United States who were vaccinated against measles decades ago may need a new dose depending on when they received the shot and their exposure risk, according to public health experts battling the nation’s largest outbreak since the virus was deemed eliminated in 2000. 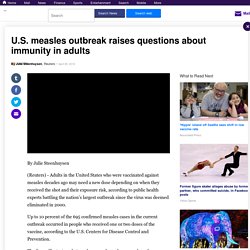 Up to 10 percent of the 695 confirmed measles cases in the current outbreak occurred in people who received one or two doses of the vaccine, according to the U.S. Centers for Disease Control and Prevention. The figure illustrates what can happen when a large number of individuals, even those who have been vaccinated, are exposed to the measles. CDC recommends that people who are living in or traveling to outbreak areas should check their vaccination status and consider getting a new dose. Dr. But knowing your vaccination status can be tricky, experts said. “It’s complicated and often futile because it's very difficult to resurrect those old records,” said Dr. World Health Organization. 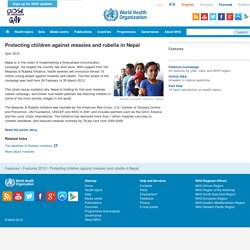 McNab Nepal is in the midst of implementing a three-phase immunization campaign, the largest the country has ever done. With support from the Measles & Rubella Initiative, health workers will immunize almost 10 million young people against measles and rubella. The first phase of the campaign was held from 26 February to 30 March 2012. Measles. Researchers are working on a patch that can vaccinate wearers against measles. A small, wearable patch is in development that could change the landscape of vaccinations, according to the U.S. 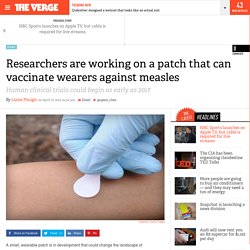 Centers for Disease Control and Prevention (CDC). Researchers at the Georgia Institute of Technology are in the process of creating a microneedle patch that could provide a simpler, safer alternative to standard measles shots. The patches are around one square centimeter in size and can be applied almost like a sticker. On the underside of each patch are one hundred conical microneedles made of polymer, sugar, and the vaccine. The microneedles are just a fraction of a millimeter long and dissolve within minutes after the patch is applied. Human clinical trials could begin in 2017 Vaccinations delivered through microneedle patches could be hugely beneficial in developing countries without sophisticated medical access.

In 2013, there were 145,700 measles-related deaths worldwide, according to the World Health Organization. 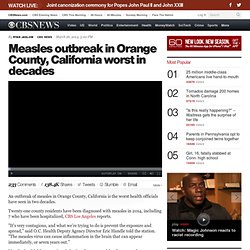 Twenty-one county residents have been diagnosed with measles in 2014, including 7 who have been hospitalized, CBS Los Angeles reports. "It's very contagious, and what we're trying to do is prevent the exposure and spread," said O.C. Health Deputy Agency Director Eric Handle told the station. "The measles virus can cause inflammation in the brain that can appear immediately, or seven years out. " Measles is a highly contagious infection that starts with a fever, cough, runny nose and pink eye before progressing to a rash on the face, upper neck that within a few days spreads down to the rest of the body. Approximately 20 percent of cases experience more serious complications such as pneumonia and encephalitis, which is a potentially-fatal swelling of the brain.

Growing Up Unvaccinated - Voices for Vaccines. The most infectious of all infectious diseases. Measles was declared eradicated in the United States in 2000We still continue to see cases stemming from overseasMeasles is preventable through vaccination Editor's note: Dr. Tom Frieden is director of the Centers for Disease Control and Prevention. (CNN) -- My first investigation as a new Epidemic Intelligence Service (EIS) Officer with the Centers for Disease Control was of a large outbreak of measles, mostly among Hispanic children, many under a year old, and many who became infected when they visited hospital emergency departments for other reasons. I will never forget how nervous I was. I wanted to do a good job for those children, their families and everyone around them.

By 2000, a decade after my EIS experience, measles transmission in the United States was declared to have been stopped. Six myths about vaccination – and why they're wrong. Recently released government figures show levels of childhood vaccination have fallen to dangerously low levels in some areas of Australia, resulting in some corners of the media claiming re-ignition of “the vaccine debate”. 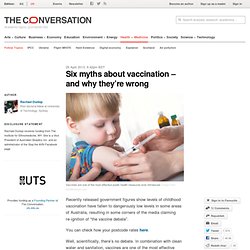 You can check how your postcode rates here. Well, scientifically, there’s no debate. In combination with clean water and sanitation, vaccines are one of the most effective public health measures ever introduced, saving millions of lives every year. Those who claim there is a “debate” will cite a series of canards designed to scare people away from vaccinating, but, if you’re not familiar with their claims, you could easily be convinced by anti-vaccine rhetoric.

So what is true and what is not? Health.utah.gov/epi/diseases/measles/Clinic_and_Hospital_Recommendations_for_Measles_Exposures.pdf.