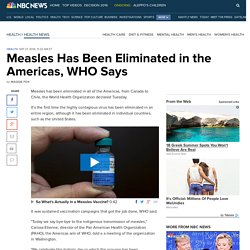 It's the first time the highly contagious virus has been eliminated in an entire region, although it has been eliminated in individual countries, such as the United States. It was sustained vaccination campaigns that got the job done, WHO said. Anti-vax communities get measles: Outbreaks linked to denial of vaccines. Photo by Shutterstock/Sam72 In Texas, a (most likely now formerly) anti-vaccine megachurch is the epicenter of a measles outbreak that so far has infected 20 people. 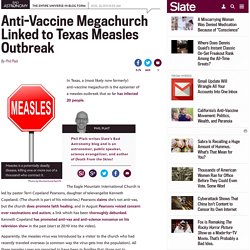 Phil Plait writes Slate’s Bad Astronomy blog and is an astronomer, public speaker, science evangelizer, and author of Death From the Skies! The Eagle Mountain International Church is led by pastor Terri Copeland Pearsons, daughter of televangelist Kenneth Copeland. (The church is part of his ministries.) Pearsons claims she’s not anti-vax, but the church does promote faith healing, and in August Pearsons voiced concern over vaccinations and autism, a link which has been thoroughly debunked. The Vaccine War. Seth Mnookin: How the Vaccine War Has Changed “What we’ve learned in the last five years is that once you scare someone, you can’t just unscare them,” says Mnookin, a science writer who has reported extensively on the vaccine debate. 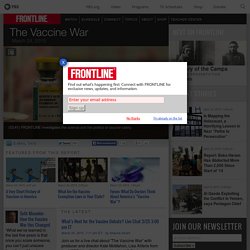 Dr. Anthony Fauci: Risks From Vaccines Are “Almost Nonmeasurable” When a vaccine has gone through the safety process, the risk to children is “almost nonmeasurable,” says the director of the National Institute of Allergy and Infectious Diseases. Jenny McCarthy: “We’re Not An Anti-Vaccine Movement … We’re Pro-Safe Vaccine” California approves bill banning child vaccine exemptions. California lawmakers approved a bill this week that would prevent most parents from opting out of vaccinations for their children enrolled in school, just months after the state was hit with the largest U.S. measles outbreak in decades. 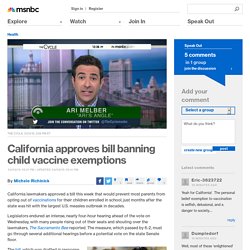 Legislators endured an intense, nearly four-hour hearing ahead of the vote on Wednesday, with many people rising out of their seats and shouting over the lawmakers, The Sacramento Bee reported. The measure, which passed by 6-2, must go through several additional hearings before a potential vote on the state Senate floor. The bill, which was drafted in response to recent outbreaks of preventable diseases like measles and whooping cough, eliminates the “personal beliefs” exemption that currently allows parents in California to not vaccinate their children before enrolling in public or private school. Public health officials point to extensive research showing vaccines protect the common good and that adverse side effects are rare. M.dailykos. With so much debate around the seeming return of Measles - in part spurred by those who were not vaccinated, and putting more at risk, many friends have reminded me of this statement about the impact of Measles on childrens literature author Roald Dahl, who lost his daughter in 1962. 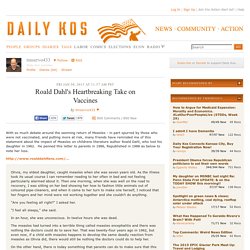 He penned this letter to parents in 1986, Republished in 1988 as below to note her loss. Olivia, my eldest daughter, caught measles when she was seven years old. As the illness took its usual course I can remember reading to her often in bed and not feeling particularly alarmed about it. Then one morning, when she was well on the road to recovery, I was sitting on her bed showing her how to fashion little animals out of coloured pipe-cleaners, and when it came to her turn to make one herself, I noticed that her fingers and her mind were not working together and she couldn't do anything.

"Are you feeling all right? " Update Thanks to all for so many shares. It's Official: Anti-Vaxxers Caused The Disneyland Measles Outbreak. By Tara Culp-Ressler Posted on. 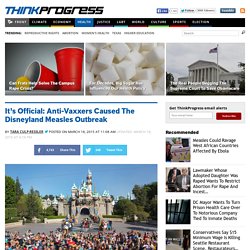 Cdc_confirms_new_measles_cases_in_outbreak. The Centers for Disease Control had unsettling news to share on Tuesday, announcing that America’s fight against a recent outbreak of measles is far from over. 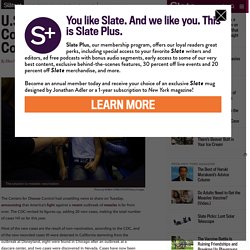 The CDC revised its figures up, adding 20 new cases, making the total number of cases 141 so far this year. Most of the new cases are the result of non-vaccination, according to the CDC, and of the new recorded cases 10 were detected in California stemming from the outbreak at Disneyland, eight were found in Chicago after an outbreak at a daycare center, and two cases were discovered in Nevada. Cases have now been reported in 17 states and Washington, D.C. Parents Reportedly Throwing 'Measles Parties' To Infect Their Unvaccinated Kids. By Tara Culp-Ressler Posted on Share this: "Parents Reportedly Throwing ‘Measles Parties’ To Infect Their Unvaccinated Kids" Share: CREDIT: Shutterstock Some parents in California are reportedly considering hosting “measles parties” — social gatherings where unvaccinated children can come into contact with infected kids — to build up their children’s natural resistance to the infectious disease. 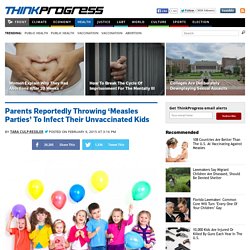 California Lawmakers Are Finally Taking a Stand Against the Anti-Vaccine Movement. The news: On Wednesday, two Democratic California lawmakers revealed plans to propose legislation that would require all parents to vaccinate their children unless there is a health risk. 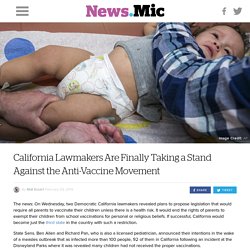 It would end the rights of parents to exempt their children from school vaccinations for personal or religious beliefs. If successful, California would become just the third state in the country with such a restriction. State Sens. CDC Urges Measles Vaccinations as Number of Cases Exceeds 100. The Centers for Disease Control and Prevention urged Americans to vaccinate their children against measles as the number of people hit by a new outbreak of the disease climbed past 100. 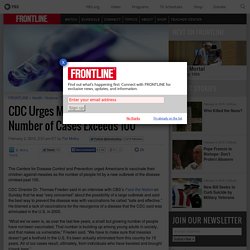 CDC Director Dr. Autism community's leaders make it crystal-clear: Vaccinations do not cause autism. Vaccinations don't cause autism. But not vaccinating does spread contagious diseases like measles. In 1998, Andrew Wakefield conducted a study of 12 children linking the MMR vaccine to the onset of autism. His study has since been discredited, he was stripped of his medical license and larger-scale studies were done that refuted Wakefield's findings. But the aftermath of Wakefield's bunk study lives on and the misinformation perseveres. Journalist Jeremy Laurance called it "one of the biggest public relations disasters in medicine. " Anti-vaccine megachurch hit with measles epidemic, now offering free vaccinations. An outbreak of the measles at Kenneth Copeland's Texas megachurch has gotten some attention because (1) measles is something children are generally vaccinated for, these days and (2) Kenneth Copeland is, of course, an anti-vaccine crackpot.

In what seems to be yet another bitterly ironic attempt by God to teach noisy religious fundamentalists what-for, the church has thus become the epicenter of a small but worrisome outbreak that has so far infected 10 and resulted in the Department of State Health Services issuing an alert spanning North Texas. That has megachurch pastors doing a bit of fancy dancin', with Pastor Terri Pearson (Copeland's daughter) walking back their leader's anti-vaccination stance to explain to the congregation that no, God does not really want your children to contract a potentially dangerous disease that vaccinations have all but licked because duh. See there? Vaccination debate flares in GOP presidential race, alarming medical experts. CAMBRIDGE, England — Medical experts reacted with alarm Monday as two top contenders for the Republican presidential nomination appeared to question whether child vaccinations should be mandatory — injecting politics into an emotional issue that has taken on new resonance with a recent outbreak of measles in the United States.

First, New Jersey Gov. Chris Christie, while visiting a vaccine laboratory here, called for “some measure of choice” on whether shots guarding against measles and other diseases should be required for children. Then, Sen. Rand Paul (R-Ky.), an ophthalmologist who is also readying a 2016 campaign, said in two U.S. television interviews that he thinks most vaccines should be voluntary, citing “many tragic cases of walking, talking, normal children who wound up with profound mental disorders after vaccines.” On Monday, the Centers for Disease Control and Prevention said that more than 100 cases of the highly infectious disease were diagnosed in January. Measles returns: Of vaccines and vacuous starlets. Some doctors won't see patients with anti-vaccine views. With California gripped by a measles outbreak, Dr.

Charles Goodman posted a clear notice in his waiting room and on Facebook: His practice will no longer see children whose parents won't get them vaccinated. Measles Risk at Super Bowl 2015 - Bloomberg Business. Seven people have been diagnosed with measles in Arizona in the state's first outbreak since 2008, and officials are trying to alert others who may have been exposed as thousands of football fans arrive in Phoenix for the Super Bowl this weekend.

The timing has sparked fears that the outbreak traced to Disneyland in December might mushroom among the crowd at the game. Public officials are urging people to get vaccinated and telling potentially exposed children to stay home. But epidemiologists aren't particularly worried about transmission among the 70,000 fans expected at the game, for a simple reason: Most Super Bowl fans are adults who've been inoculated. Should vaccination remain a choice? Your Say Interactive. ​Arizona monitoring 1,000 people for measles linked to Disneyland. Measles outbreak reaches Bay Area, 30 babies now under isolation. A Measles Outbreak at Disneyland Is Reigniting the Debate on Vaccinations. What's Really Behind the Measles Outbreak. Medical authorities have been quick to point to the anti-vaccine movement as the cause for the measles outbreak in California, but an analysis of the data suggests there may be other contributing factors, from public health measures that targeted only children to lack of access to medical care.

The Disneyland measles outbreak and the disgraced doctor who whipped up vaccination fear. Andrew Wakefield, center, stands with his wife, Carmel Wakefield, as he speaks to the media after a hearing at the General Medical Council (GMC) in London on Jan. 28, 2010. The GMC ruled that Wakefield acted unethically in doing his research into a link between vaccinations and autism. (Luke MacGregor/Reuters) Ebola Was Only A Warm-Up: The Measles Outbreak Is For Real.

Anti-Vaxxers Brought Measles to the Happiest Place on Earth. The king succeeded in bringing some stability to Saudi Arabia, but he could do nothing but despair as chaos descended on the rest of the region. President George W. Bush held his hand and walked with him through a field of flowers at the ranch in Crawford, Texas. President Barack Obama, when he first met him, performed a courtly bow. The devastating impact of vaccine deniers, in one measles chart. If you want to quantify the alarming impact of the anti-vaccine movement, the chart above is a good place to start. There's a measles outbreak at Disneyland. Here's what you need to know. Measles at Disneyland: What You Should Know. Jan. 20, 2015 -- At least 42 people have caught measles in an outbreak linked to Disneyland and Disney California Adventure Park over the Christmas holidays, health officials say. The number includes 36 people in California and six from other states and Mexico, according to the California Department of Public Health.

Measles update: Unvaccinated kids told to stay home from Calif. school. Last Updated Jan 20, 2015 7:23 PM EST A student infected with measles may have exposed others at an Orange County, California, high school, and public health officials have ordered some two dozen unvaccinated students at the school to stay home to avoid spreading the outbreak further. The Orange County Register reports Dr. Matt Zahn, the medical director for epidemiology at the Orange County Health Care Agency, sent a letter to parents saying an infected student was at Huntington Beach High School from Jan. 6 to 8.