" Also included are pronunciations of each word with alternate pronunciations if available. Bible Study Tools offers two Bible versions, King James and New American Standard, for studying within the Old Testament lexicons. NOTE: In order to see the actual Greek and Hebrew characters you must download and install the free BST Fonts. Click here to view the BST Fonts page. Hebrew - English Bible. Hebrew Alphabet. The Hebrew and Yiddish languages use a different alphabet than English. 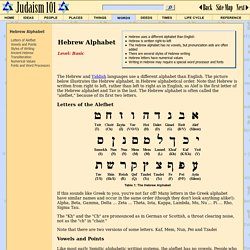 The picture below illustrates the Hebrew alphabet, in Hebrew alphabetical order. Note that Hebrew is written from right to left, rather than left to right as in English, so Alef is the first letter of the Hebrew alphabet and Tav is the last. The Hebrew alphabet is often called the "alefbet," because of its first two letters. Letters of the Alefbet. Hebrew Glossary. Then name Ashkenaz (Bereishit 10:3) has since the 10th century been identified with Germany. As the German and French Jews of the medieval period formed a uniform group in culture and religious customs, they were all referred to as Ashkenazim in contradistinction to the Sefardim or Spanish- Portuguese Jews.

Ashkenazim are the people who use Nusach Ashkenaz, the prayer arrangement adopted by the medieval Franco-German Jews, including certain variations described as belonging to the Polish custom (Minhag Polin). In the 18th century, the Chasidic movement adopted the Sefardic arrangement of prayers; hence, the Chasidim have been called Sefardim on many occasions. The Ashkenazim in Eastern Europe developed an intense religious life, disseminating Talmudic scholarship among the people to a degree never before surpassed in Jewish history. A high Jewish literacy existed in an illiterate non-Jewish environment. The vitality of the Ashkenazim still dominates wherever they are transplanted. The Septuagint. Septuagint. Septuagint Old Testament Bilingual (Greek / English) - 1. Online Greek OT (Septuagint/LXX) UTF8 Bible. Septuagint Index. Sacred Texts Bible This is the main index for the Septuagint, the oldest Greek version of the Jewish Bible. 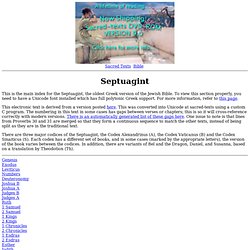 To view this section properly, you need to have a Unicode font installed which has full polytonic Greek support. For more information, refer to this page. This electronic text is derived from a version posted here. This was converted into Unicode at sacred-texts using a custom C program. Learning New Testament Greek: Nouns, Articles, and Position. We have already defined nouns in a previous lesson, but let's repeat the definition here: Nounsare words that describe people, places, or things. 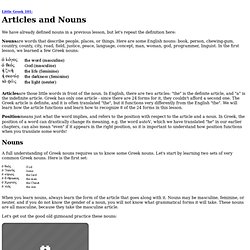 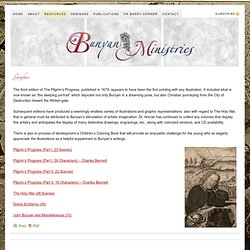 It included what is now known as “the sleeping portrait” which depicted not only Bunyan in a dreaming pose, but also Christian journeying from the City of Destruction toward the Wicket-gate. Subsequent editions have produced a seemingly endless variety of illustrations and graphic representations, also with regard to The Holy War, that in general must be attributed to Bunyan’s stimulation of artistic imagination. Dr. Horner has continued to collect any volumes that display this artistry and anticipates the display of many distinctive drawings, engravings, etc., along with colorized versions, and CD availability.

There is also in process of development a Children’s Coloring Book that will provide an enjoyable challenge for the young who so eagerly appreciate the illustrations as a helpful supplement to Bunyan’s writings. Pilgrim’s Progress (Part I, 23 Scenes) Audio Bible Online. Amazing Facts > Media Library. English Testimonies of Changed Lives Watch these inspirational stories that will encourage your faith in the Lord. Listen to others like you who found prayer for healing brokenness. These heart-touching testimonies will strengthen you and help you draw closer to God. 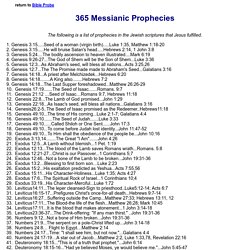