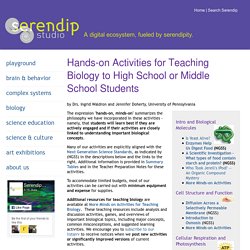 Ingrid Waldron and Jennifer Doherty, University of Pennsylvania The expression "hands-on, minds-on" summarizes the philosophy we have incorporated in these activities - namely, that students will learn best if they are actively engaged and if their activities are closely linked to understanding important biological concepts. Many of our activities are explicitly aligned with the Next Generation Science Standards, as indicated by (NGSS) in the descriptions below and the links to the right.

Additional information is provided in Summary Tables and in the Teacher Preparation Notes for these activities. To accommodate limited budgets, most of our activities can be carried out with minimum equipment and expense for supplies. Additional resources for teaching biology are available at More Minds on Activities for Teaching Biology. Read More Intro and Biological Molecules Is Yeast Alive? Enzymes Help Us Digest Food(revised, July, 2016) Who Took Jerell's iPod? 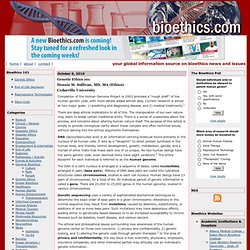 Sullivan, MD, MA (Ethics) Cedarville University Completion of the Human Genome Project in 2003 provided a “rough draft” of the human genetic code, with more details added almost daily. Current research is aimed at two major goals: 1) predicting and diagnosing disease, and 2) medical treatments.1 There are deep ethical implications to all of this. DNA (deoxyribonucleic acid) is an information-carrying molecule found primarily in the nucleus of all human cells. The DNA in a cell’s nucleus is arranged in a sequence of bases, called nucleotides, arranged in pairs (base pairs). Genetic sequencing uses a variety of sophisticated biochemical techniques to determine the exact order of base pairs in a given chromosome. Another concern in this age of increased genetic information is the idea of ownership. The second major domain for ethical concern is that of genetic testing. Genetic testing can also be performed at a much earlier stage in human development.

S BioInteractive. Tidal Wetlands. Skip to main navigation The final Tidal Wetlands Guidance document for installing catwalks and docks is listed in the right column of this page. 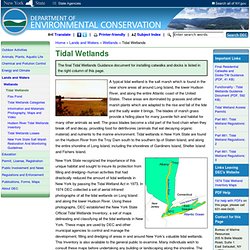 A typical tidal wetland is the salt marsh which is found in the near shore areas all around Long Island, the lower Hudson River, and along the entire Atlantic coast of the United States. These areas are dominated by grasses and other marsh plants which are adapted to the rise and fall of the tide and the salty water it brings. The blades of marsh grass provide a hiding place for many juvenile fish and habitat for many other animals as well.

The grass blades become a vital part of the food chain when they break off and decay, providing food for detritivores (animals that eat decaying organic material) and nutrients to the marine environment. The New York State Official Tidal Wetlands Inventory is maintained by DEC Bureau of Marine Resources in the Tidal Wetlands Inventory and Geographic Information System (GIS) Unit. Trends. Federal Lands of the United States. Sample Map National parks, national wildlife refuges, military reservations, Federal prisons, and public-domain land are all examples of lands owned or administered by the Government of the United States. 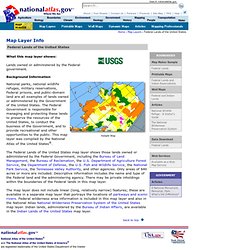 Biology 561 Barrier Island Ecology Fall Semester. Return to course schedule Dune Formation and Morphology Dune Formation Resources Dunes form where there is a large supply of sand, the wind to move it, and a place for the sand to accumulate (Fig.1). 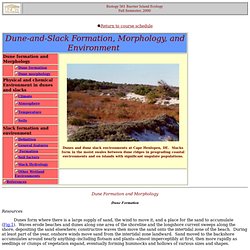 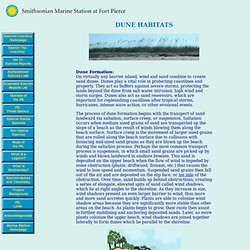 Dunes play a vital role in protecting coastlines and property. They act as buffers against severe storms, protecting the lands beyond the dune from salt water intrusion, high wind and storm surges. Dunes also act as sand reservoirs, which are important for replenishing coastlines after tropical storms, hurricanes, intense wave action, or other erosional events. Glaciotectonics. Last updated on June 04, 2008 In most general descriptions of glacial features, moraines are described as consisting dominantly of till a poorly sorted mixture of rock types. 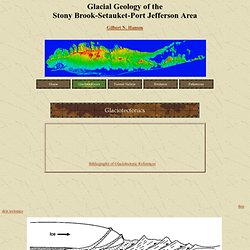 This till was supposedly deposited at the front of a glacier during a period when the front of the glacier was at a still-stand while melting (ablation) and advance of the glacier were in balance. However, in areas underlain by unconsolidated sediment, whether of glacial or pre-glacial origin, the moraines are commonly ice shoved moraines consisting of sheets of the underlying sediments thrust up into hills. Depending on the nature of the underlying sediments, these moraines may have little till. Ice shoved moraines have the appearance of small scale mountains. As the glacier advances over underlying sediments it may push them in front in a manner similar to the action of a bulldozer. Prof. Spartina Salt Marshes. West Meadow Creek in Winter, North Shore of Long Island NY Spartina salt marshes are broad nearly level meadows dominated by several species of grasses that are tolerant of salt and anoxic sediment. 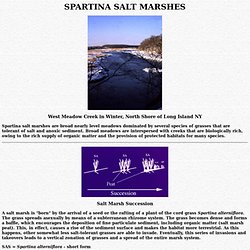