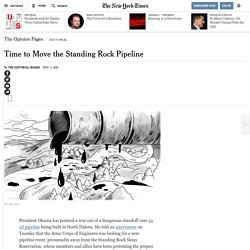 He told an interviewer on Tuesday that the Army Corps of Engineers was looking for a new pipeline route, presumably away from the Standing Rock Sioux Reservation, whose members and allies have been protesting the project for months, saying it threatens the tribe’s sacred lands and water supply. It was a welcome hint of good news in an intensely bitter confrontation that came wrapped in historic injustice and seemed destined to end in grief.