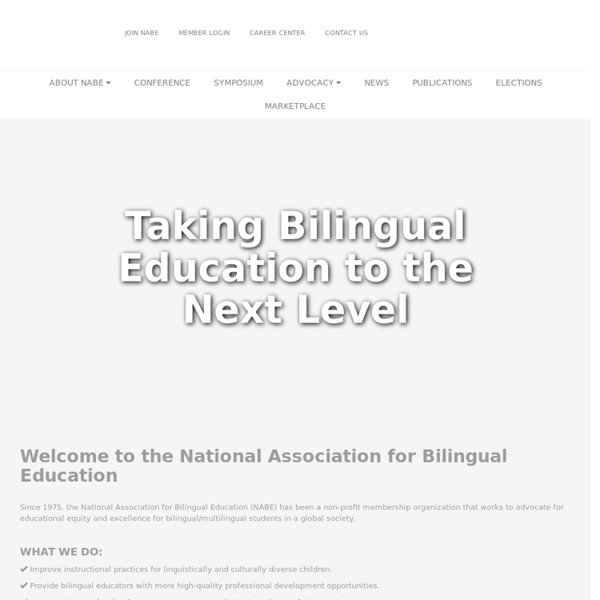 Talk to Your Baby Research consistently points to early oral language skills as among the strongest predictors of educational success, and as providing a vital foundation for school-readiness and effective learning across other domains. - Nuffield Foundation report into Early Education and Childcare, 2015 The legacy of Talk to Your Baby speaks for itself. The conference, that is renowned for its in-depth and engaging reviews of policy, research and practice, highlights the key role communication and language can play in improving the life chances of children. Children come into the world ready to learn language.

When students need extra behavior support Having targeted supports and mediation techniques in place makes it easier for teachers to readily manage behavior issues Classroom teachers face a range of challenges during their school day but none perhaps so demanding as persistent problem behaviors. Whether schools have a formal positive behavior support system in place or not, having techniques at hand is essential for getting teachers back to teaching and students back to learning.

Learning Two Languages [en Español] Anyone can learn a new language. Some people find it easier than others, but all of us can do it. People who can use two languages are bilingual. How Does Stephen Hawking Talk? - ScienceABC Stephen Hawking talks through the computer using a speech-generating device (SGD) or a voice output communication aid. This is a special device that either supplements or replaces speech/writing. Stephen Hawking is a name that is impossible to ignore, at least if you’re a human from Earth. Although, to be fair, I’m willing to bet that aliens also know a thing or two about him. To give a bit of quick background, Steven Hawking is a British cosmologist and physicist most famously known for his notable scientific works regarding the theoretical prediction of radiation emission from black holes (Hawking radiation), Penrose–Hawking theorems, the general theory of relativity and quantum mechanics. He also authored A Brief History of Time, a popular bestseller that discusses the Big Bang and black holes.

The Advantages of Being Bilingual Most children have the capacity and facility to learn more than one language. Researchers say that there are advantages to being bilingual. These advantages might include; Guideline on Expanding Opportunities: Academic Success for Culturally and Linguistically Diverse Students Prepared by the members of the 1986 Task Force on Racism and Bias in the Teaching of English The age of specialization has often encouraged educators to create separate and remedial ways of teaching culturally and linguistically diverse students. This trend has led to the development of special books, programs, courses, and methods for such students. Some of these curricular approaches have impeded, rather than fostered, their intellectual and linguistic growth.

What Does Research Tell Us About Teaching Reading to English Language Learners? As a classroom teacher, I was largely ignorant of, and definitely suspicious of, research. I believed that researchers could make their studies come out any way they wanted them to, and that a good teacher who reflected on her own teaching knew much more about how to be effective with her students than any researcher did. Later, as a university professor, I learned how important good research can be, and how difficult it is to do really good experimental research in a field such as education, where it is impossible to control all the variables. For that reason, I was pleased in 1997 when Congress funded the National Reading Panel (NRP) to evaluate research about teaching children to read. The panel's charge was to review existing studies, choose those that were well designed and well implemented, and synthesize their findings. Teachers of English language learners (ELLs), however, were left to wonder if and how the findings of the NRP applied to their students.

Autism Spectrum Disorder (ASD) Page Content ASD is a complex developmental disorder that affects how a person behaves, interacts with others, communicates, and learns. NICHD is one of many federal agencies and NIH Institutes working to understand ASD. NICHD supports and conducts research on what causes autism, how best to detect signs of autism, how best to treat autism and its symptoms, and other topics. English-Language-Learner Classification Can Impede Student Growth, Study Finds - Learning the Language UserID: iCustID: IsLogged: false IsSiteLicense: false UserType: anonymous DisplayName: