How to Set Up Your Own Private Cloud Storage Service in Five Minutes with OwnCloud. Documentation - Workflow. How to Completely Lock Down Your iPhone's Lock Screen. About the Loom.ai team. New To Mac OS? Here Are 30 of the Best Apps Available. Evernote Evernote is the undisputed king of note taking apps, and for good reason. 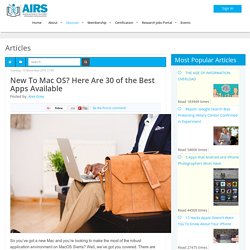 It’s simple, organized in a highly intuitive way, and syncs with just about any Web service you can imagine. Since it’s one of the most popular apps in existence, there’s a veritable boatload of browser extensions and add-ons available for it as well. Download now from: Day One 2 Journal ($30) Journals are an age-old tradition — just ask Benjamin Franklin. Purchase now from: Fantastical 2 ($50) Fantastical 2 is the only calendar app you’ll ever need, so long as you’re willing to shell out a cool $50 for it. Pixelmator ($30) Mac users have an incredibly vast selection of excellent photo editing programs, but even against thousands of competitors, Pixelmator stands out as one of the best. Pocket As the name might imply, Pocket is a tool that lets you “pocket” articles, videos, and webpages for later viewing.

PDF Expert ($60) Google Reader may be dead and gone, but a proper RSS reader is still a must. Text Wrangler. 17 Hacks Apple Doesn’t Want You To Know About Your iPhone. Love them or hate them, you've likely had an iPhone at some point -- and if not, someone you know has one. 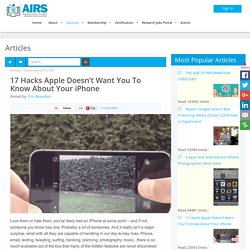 Probably a lot of someones. And it really isn't a major surprise, what with all they are capable of handling in our day-to-day lives. Phone, email, texting, tweeting, surfing, banking, planning, photography, music...there is so much available out of the box that many of the hidden features are never discovered by most users. We've compiled a list of what we think are the most handy tips and tricks to get even more out of your iPhone -- and some of them may actually astonish you. Either because you didn't know you could be doing things much more easily than you do now, or that you didn't know your phone was paying that much attention to you. 1. 2. 3. 4. 5. 6.

Live Photo tips: All you need to know about taking Live Photos on iPhone 6s. 15 iPhone Tricks Apple Has Been Hiding From You. The ongoing debate between Android and Apple users just got a little more complicated. 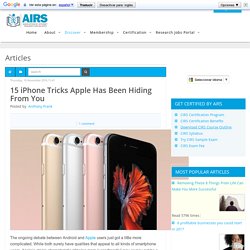 While both surely have qualities that appeal to all kinds of smartphone users, Apple’s staple characteristic of being more “user-friendly” may or may not be a load of false advertising. With its almost too-simple interface, iPhones have essentially remained the same since their origination. However, with every new edition of this popular device, there also comes a few major and minor updates – many of which we may not even realize exist. Apple engineers may be patting themselves on the back for their progressive shifts in this user-friendly phone, but perhaps they should have a word with the advertising department first. While Apple is constantly advertising the sleek, new designs of their latest iPhones, they oftentimes overlook some notable customized updates. 1. Cult of Mac 2. iMore Instead of sticking to the standard vibration pattern for your text messages, create your own! 3. Here's the thing. 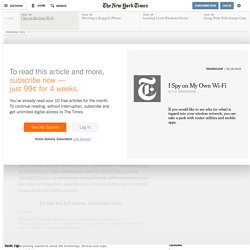 How can I see who is connected to my home Wi-Fi network? A. Depending on your interest in technical fiddling, you can see what other devices are connected to your network in several ways. For one, you could log into your wireless router’s administrative page and check its DCHP Client Table (sometimes called the DHCP Client List or Attached Devices, as some router companies use different terms) to see the roster of computers, smartphones, tablets and other gear currently connected to the wireless router. iOS 版 Explain Everything, 收費90元.