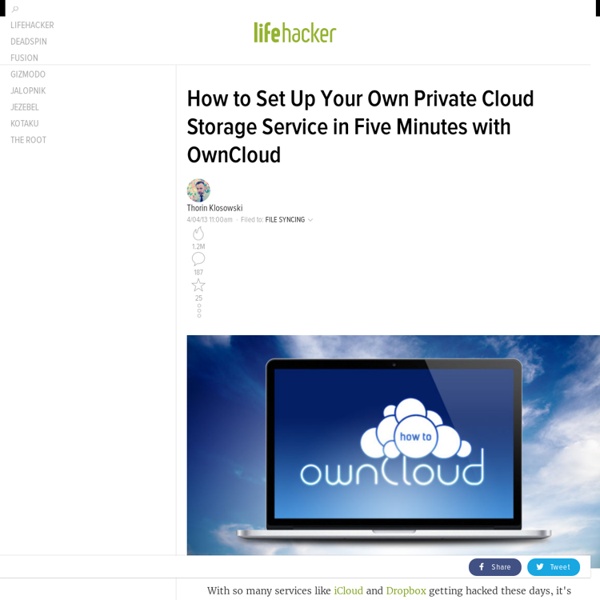 Three things about your opening paragraph. 1) The cloud stuff getting hacked/cracked is the basis of Brian K Vaughan's new comic "The Private Eye" it's pay what you want (including nothing) - check it out here 2) You mention people would want to setup ownCloud for security reasons - ie the hacking/cracking. But lifehacker readers are probably going to make some amateur mistakes compared to engineers at companies like dropbox. 3) Related to that - once you start installing third party extensions - unless you examine the source code you don't know that they aren't getting a back door into your data. #2 and #3 aren't to poo-poo the idea of ownCloud. Flagged Yep, totally—one of the nice things is that ownCloud does offer up SSL so you can at least secure your connections, and the fact that's it's open source makes it at least possible for people do dig into the code if they want (not that I have/would even know what to look for). SSL is not done by ownCloud. Ah, yeah—good point.

New To Mac OS? Here Are 30 of the Best Apps Available Evernote Evernote is the undisputed king of note taking apps, and for good reason. It’s simple, organized in a highly intuitive way, and syncs with just about any Web service you can imagine. Since it’s one of the most popular apps in existence, there’s a veritable boatload of browser extensions and add-ons available for it as well. Home networking explained, Part 5: Setting up a home router Editors' note: This post is part of an ongoing series. For the other parts, check out the related stories section below. It might seem like a daunting task to set up a new home router. But it doesn't have to be if you understand the most common way routers are managed: through the Web interface. The hardest part of using the Web interface is getting to it. Once you have gotten there, the rest, at least most of it, is self-explanatory.

mindmup This operation requires a valid MindMup Gold License. Export, save and embed larger maps using MindMup Gold. We have sent a temporary access code to your e-mail. Please wait, your license is being restored 17 Hacks Apple Doesn’t Want You To Know About Your iPhone Love them or hate them, you've likely had an iPhone at some point -- and if not, someone you know has one. Probably a lot of someones. And it really isn't a major surprise, what with all they are capable of handling in our day-to-day lives. Phone, email, texting, tweeting, surfing, banking, planning, photography, music...there is so much available out of the box that many of the hidden features are never discovered by most users. We've compiled a list of what we think are the most handy tips and tricks to get even more out of your iPhone -- and some of them may actually astonish you.

How to Add a Kindle DRM-Removal Plugin to calibre Update: These instructions were updated on 22 August 2013. They worked for me on that day. DRM is the bugaboo of ebooks. Indie Box: Let's Bring Our Data Home The first ready-to-use personal server appliance for storing personal data and running indie web applications at home. Made for humans, not just geeks. Pre-installed indie web applications provide functionality such as calendaring, address book management, publishing, sharing, bookmarking, photo and media management and more. Indie Box One eliminates the need to entrust our personal data to big internet companies who often share and use it in ways we don't appreciate. By keeping personal data at home under our own control, Indie Box One lets us cut the cord from the ever-more invasive internet overlords and their monetization schemes and become independent citizens of the internet again.

15 iPhone Tricks Apple Has Been Hiding From You The ongoing debate between Android and Apple users just got a little more complicated. While both surely have qualities that appeal to all kinds of smartphone users, Apple’s staple characteristic of being more “user-friendly” may or may not be a load of false advertising. With its almost too-simple interface, iPhones have essentially remained the same since their origination. However, with every new edition of this popular device, there also comes a few major and minor updates – many of which we may not even realize exist. Apple engineers may be patting themselves on the back for their progressive shifts in this user-friendly phone, but perhaps they should have a word with the advertising department first.

How to Share Your Wi-Fi Network with Friends, No Password Typing Required I forget the different protocals, but with multiple of them it is not simply a word. AS in a 64 bit passcode is 31(maybe 62 or soemthing) characters and are letters both caps and lowercase, numbers and a great deal of symbols, and they are generated, so ya it can be like 13ndk(sjJslwqo^1*9918jdoWlslmSnQNsB think of typing that in on your phone, when at your buddies for 10 minutes it would take you the whole 10 mins to type lol Also in addition, it is apples problem that it can not use standardised QR input info not ours.......I mean its all pretty easy to impliment code wise so there are no excuses I Spy on My Own Wi-Fi Q. How can I see who is connected to my home Wi-Fi network? A. Depending on your interest in technical fiddling, you can see what other devices are connected to your network in several ways. For one, you could log into your wireless router’s administrative page and check its DCHP Client Table (sometimes called the DHCP Client List or Attached Devices, as some router companies use different terms) to see the roster of computers, smartphones, tablets and other gear currently connected to the wireless router.

Home networking explained, part 6: Keep your network secure Editors' note: This post is part of an ongoing series. For the other parts, check out the related stories section below. If you were concerned after reading CNET's recent report that most home routers can be easily hacked, I don't blame you. The study did sound ominous, but the good news is that your network is likely far less susceptible than the report suggests. 50 essential Chrome tips Polish up on your Chrome skills and get the most out of Google's web browser with our 50 top tips. Behind its no-frills, stripped-down exterior, the Google Chrome browser hides a wealth of useful features and functions. Read on to discover some tips and tricks you can make use of to unlock the power of Chrome. Oh, and chip in with your own in the comments at the bottom. 1.

Windows 7 and Bonjour Printers My printer was recently moved to a more central location in the house and attached to the network through an airport base station . This was very convenient for all the Macs in the house (six at last count) and for the older PCs as well (through the magic of Bonjour Print Services for Windows ). However I’ve recently rebuilt my desktop PC, and had installed a brand new copy of Windows 7 on it. This presented a problem. Normally when you set up a printer through Bonjour, you run the Bonjour Printer Wizard, it sees your printer, you click the make-it-go button and you’re done. However Windows 7 doesn’t come with the drivers for my printer by default (one Brother HL-1435, a very nice machine I’ve been using happily for years.)

TiVo Roamio Pro - Digital Video Recorders (DVRs) For some time now, TiVo has been trying to become a whole-home entertainment solution. With the all-in-one TiVo Roamio Pro DVR, it has done just that. Though I don't know that it's wise to name a product after something that has an indelible relationship to a tragedy, the company's newest DVR goes hard-drive-to-hard-drive with Dish's Hopper with Sling , offering lots of tuners, tons of storage, and options for sending content to other rooms without buying additional DVRs.

How to build your own computer This is the third and final part of CNET's guide to building your own computer. Make sure you have read part one and part two before proceeding. Having all these small and expensive parts sitting in front of you may look like a daunting task, but in reality the setup process, while long, is relatively simple.