It's incredible what money can buy now a days..

& everything else will fall into place. Health.

We are all core receivers. Complex Systems. Team shortcuts. Illusion. If only they knew. Are you a Sheeple? Take the Sheeple Quiz and find out. Got slavery? Education. Inertly dependant on the system. Win-Win Conflict Resolution & Game Theory. Bookshelf: to-read. Books. Interferences. All Kids are born geniuses,but are crushed by society itself - Michio Kaku. Ken Robinson says schools kill creativity.

Sir Ken Robinson: Bring on the learning revolution! Keep your Coins, I want Change. A good question - my attempt in answering it.

Absolutely agree about Pearltrees creating obstacle courses. little understanding with that entire shift. re: communications guidelines, I have supplied my Thinker's Digest version of the main premise presented in one of my favorite books of All my time, The Tao of Negotiation by Joel Edelman and Mary Beth Crain © 1993 happy hunting – mojojuju

Ty mojojuju, not familiar with "premier guideline for effective communication" gonna look it up. i'm trying, with all these newly purchased obstacle courses pearltrees has implimented its somewhat different than before. – aroman

Nice entry, aroman. reminds me of the premier guideline for effective communication: seek first to understand and then to be understood. keep on seeking :) – mojojuju

"just as children survived the idea of the Tooth Ferry and Santa Clause when they become adult, i think the tax paying citizens are quiet capable of accepting the new and broader reality that we live in a Cosmos teeming with life of various sorts" -Paul Hellyer – aroman

Synergistic Toxicity. Vaccines. Sodium Fluoride. The President Who Told The TRUTH!!! Be the Change You Wish to See in the World. Don't choose the oppressor. Obedience to the Logos/Cosmos/Universe/Multiverse. The Camera is Mightier Than The Sword. Fear Itself – The Power of No. Dan and Sheila Gendron, ContributorsActivist Post Some people in the scientific community speak of “genetic memory”, also known as racial memory. 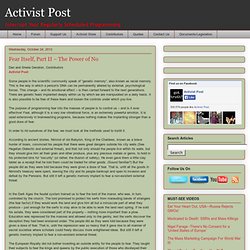 This is the way in which a person's DNA can be permanently altered by external, psychological forces. This change – and its emotional effect – is then carried forward to the next generations. There are genetic fears implanted deeply within us by which we are manipulated on a daily basis. It is also possible to be free of these fears and loosen the controls under which you live. The purpose of programming fear into the masses of people is to control us – and is it ever effective! In order to rid ourselves of the fear, we must look at the methods used to instill it. Fear campaign. Not disloyal subversion.

Inspiring. The Greatest Speech Ever Made.

Human brain: fuse with computer chips biodigital brain. Homeschooling enrollment skyrocketing as parents seek to protect children from public school brainwashing. (NaturalNews) There is less faith now in the public education system than there ever has been.

And it's not just in the US. The UK education system is a pile of crap as well. My personal opinion: it's an act of cruelty to send your children to school, because they don't learn a damn thing except for "go to University, otherwise you're lives are pointless". – rawilco

Homeschooling has increased by 75 percent in the last 14 years, according to a recent report in Education News. 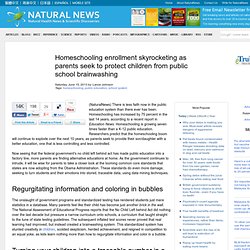 Homeschooling is growing seven times faster than a K-12 public education. Researchers predict that the homeschooling boom will continue to explode over the next 10 years, as parents seek to provide their son/daughter with a better education, one that is less controlling and less controlled. Now seeing that the federal government's no child left behind act has made public education into a factory line, more parents are finding alternative educations at home. As the government continues to intrude, it will be wise for parents to take a closer look at the looming common core standards that states are now adopting from the Obama Administration. The onslaught of government programs and standardized testing has rendered students just mere statistics in a database. No coincidences.