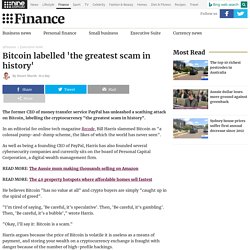 In an editorial for online tech magazine Recode, Bill Harris slammed Bitcoin as "a colossal pump-and-dump scheme, the likes of which the world has never seen". As well as being a founding CEO of PayPal, Harris has also founded several cybersecurity companies and currently sits on the board of Personal Capital Corporation, a digital wealth management firm. AXA Fizzy - The New Kid On The Blockchain. I've been asked many times to write about my Blockchain experience. 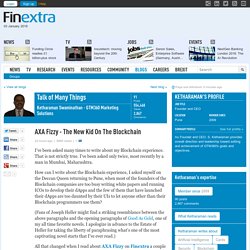 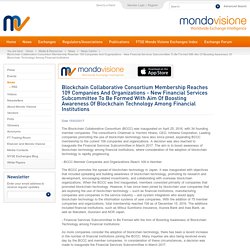 The consortium's Chairman is Yoichiro Hirano, CEO, Infoteria Corporation. Leading companies promoting the use of blockchain technology have also since joined, expanding BCCC membership to the current 109 companies and organizations. A decision was also reached to inaugurate the Financial Services Subcommittee in March 2017. What Blockchain Means for the Sharing Economy. Executive Summary Blockchain technology is facilitating the emergence a new kind of radically decentralized organization. 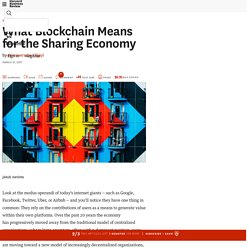 These organizations — which have no director or CEO, or any sort of hierarchical structure — are administered, collectively, by individuals interacting on a blockchain. As such, it is important not to confuse them with the traditional model of “crowdsourcing,” where people contribute to a platform but do not benefit proportionately from the success of that platform. Blockchain technologies can support a much more cooperative form of crowdsourcing — sometimes referred to as “platform cooperativism”— where users qualify both as contributors and shareholders of the platforms to which they contribute. The value produced within these platforms can be more equally redistributed among those who have contributed to the value creation. IBM, Natixis, and Trafigura introduce first-ever Blockchain solution for U.S. crude oil market - Blockchain News. Natixis, have pioneered the first Blockchain solution in commodity trade finance for US crude oil transactions. 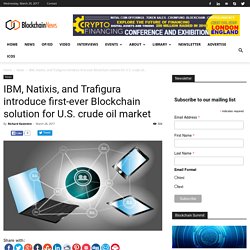 The distributed ledger platform, built on the Linux Foundation open source Hyperledger Fabric, allows major steps in a crude oil transaction to be digitized on the Blockchain, ensuring improved transparency, enhanced security, and optimized efficiency. By having the buyer, seller and their respective banks all on the same ledger, all parties can simultaneously view and share data on the status of a transaction, from the time a new trade is confirmed and validated, to when the crude oil is inspected, to its final delivery and cancellation of the letter of credit. This initiative is part of a broader effort to modernize trading in the global crude oil industry, which today is predominantly driven by manual, non-digital processes. 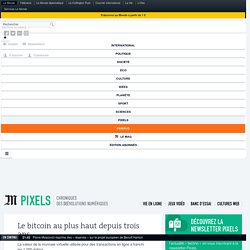 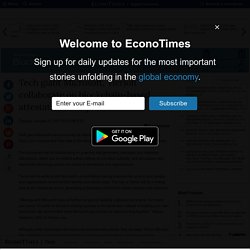 2017 is Expected to Be a Great Year for Blockchain Technology. Bitcoin’s underlying blockchain technology has seen a lot of applications in the recent times. 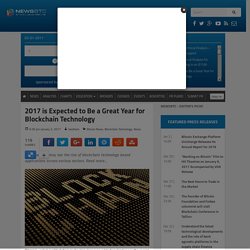 Banking and financial institutions are some of the major parties interested in the development and implementation of distributed ledger technology to their operations. Fintech is one of the hottest sectors at the moment. With a considerable number of fintech applications based on blockchain technology, we can expect a rise in blockchain 2.0 implementations.

If the track record of the fintech industry in the past two years is any indication, then the coming years will be exciting and eventful. Blockchain For Beginners - NASDAQ.com. Blockchain. 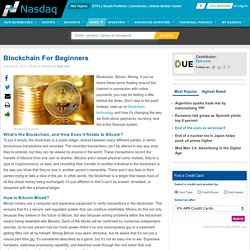 Bitcoin. Mining. If you’ve heard these terms floating around the Internet in connection with online payments, you may be feeling a little behind the times. Don’t stay in the past! What Apple Can Teach Blockchain App Designers for 2017. Steve Ehrlich is an associate and lead analyst at Spitzberg Partners, a boutique corporate advisory that has strategic relationships with firms including Ming Labs and the Wall Street Blockchain Alliance.

Matthias Roebel is CEO of Ming Labs, and Ron Quaranta is chairman of the Wall Street Blockchain Alliance. In this CoinDesk 2016 in Review special feature, Ehrlich, Quaranta and Roebel argue that a focus on user experience can help blockchain firms better communicate to the mass market in 2017 and beyond. Blockchain could save investment banks up to $12 billion a year: Accenture. Japanese Consortium for Blockchain Remittance Launches with 42 Member Banks. Blockai: Register your copyright and monitor how it's used on the web. MasterCard unveils new blockchain. Welcome… the party’s already started MasterCard has unveiled its own blockchain as it reacts to arch-rival Visa’s partnership with Chain and seeks to use the technology in payments and trade finance. Its version is currently at the testing stage and offers the usual things in this corner of the fintech world. These include smart contracts – scriptable transactions that automate business flows and reduce manual intervention; and scalability – namely MasterCard’s “proof of audit” consensus mechanism which brings commercial processing speed and extensibility to the blockchain.

Slock.it. Blockchain grid to let neighbours trade solar power in Australia. La #blockchain de #Mastercard au banc d'essai pour contrer #Visa. OpenBazaar. Blockchain publications that should be on your reading list - How m... Ever since I have been actively involved in blockchain for the past few months, it has been my endeavor to read and understand more on this subject. There are so many views, news, insights, opinions and perspectives being published on a daily basis that it is sometimes hard to catch up on the latest and greatest updates!

From fintech innovations, to technology companies to the world's largest banks to industry bodies - everyone wants to be part of the action, and have many active pursuits to be part of the blockchain-o-mania. Top 100 #Blockchain Insiders: Most Influential People in the Crypto Sphere. How blockchain will impact accountants and auditors. Blockchain promises a world where all transactions can be logged, viewed and monitored in real time. There are potential implications for a wide variety of sectors and professions, not least accountants and auditors. Nick Martindale investigates what it could lead to Back in the early 1990s, very few people had heard of the internet, let alone had any inkling as to just how much it would disrupt traditional ways of working and consumer habits. Clé publique, clé privée: comment vos bitcoins sont protégés. J'ai mentionné à plusieurs reprises les notions de clé privée, clé publique et de signature.

With YoCoin, contracts and bonds can be executed without the involvement of lawyers; stock exchanges can operate without central clearing houses; financial records can be verified without auditors and tamper-proof voting systems can be automated to ensure one person gets to vote only once. Since its initial launch, the main target audience of YoCoin was the younger millennial crowd. But now, the digital currency considers itself as a premier internet currency with a much broader vision. Krypton Abandons Ethereum for Bitcoin Proof of Stake Blockchain after 51% Attack. Le premier baptême du feu pour appliquer la blockchain au crowdfunding. Learn to code. The Blockchain Explained to Web Developers, Part 1: The Theory. The blockchain is the new hot technology. If you haven’t heard about it, you probably know Bitcoin. Well, the blockchain is the underlying technology that powers Bitcoin.

Experts say the blockchain will cause a revolution similar to what Internet provoked. But what is it really, and how can it be used to build apps today? This post is the first in a series of three, explaining the blockchain phenomenon to web developers. To begin, let’s try to understand what blockchains really are. Bien maîtriser la « blockchain » pour la populariser, Editos & Analyses. Blockchain : vers un nouveau paradigme pour les recruteurs ? (d’après Computer Futures) Les révolutions sont à l’origine des plus grandes évolutions de notre société. Blockchain, le nouvel ange-gardien des assureurs ?