Visual Studio Code Remote Containers – A way to provide consistent and isolated development environments for your (UI5) development. Do you know the situation when you are working in different projects which different needs regarding your development setup? 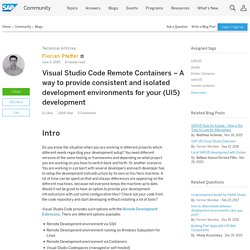 You need different versions of the same tooling or frameworks and depending on what project you are working on you have to switch back and forth. Or another scenario: You are working in a project with several developers and each developer has to setup the development instrastructure by its own on his/hers machine. A lot of time can be spent on that and always differences are appearing on the different machines, because not everyone keeps the machine up to date. Would it not be great to have an option to provide your development infrastructure with just some configuration files? Check out your code from the code repository and start developing without installing a lot of tools? Visual Studio Code provides such options with the Remote Development Extensions. Remote Containers Extension First, install the “Remote – Containers” extension in Visual Studio Code. Top 8 Alternatives Of GitHub Codespaces - Analytics India Magazine. Codespaces is an online development environment powered by Visual Studio Code that not only empowers developers to make changes directly in GitHub repositories but also delivers every other feature of an on-premise integrated development environment platform. 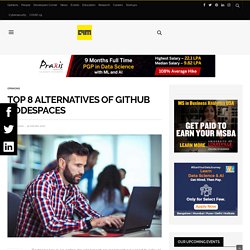 Web-based IDEs have gained huge traction among developers due to ease of use and enhanced collaboration capabilities in real time. It also eliminates various hassles that developers come across like conflict in environments and installing dependencies while working on various projects. With online IDEs, one can quickly start working on the projects as they provide isolated environments and configure repositories by installing required files automatically. This, especially, helps developers to start contributing to open-source projects without the need for configuring an environment similar to that of the original repository. Here’s the list of alternatives to GitHub Codespaces that you can use right away: – 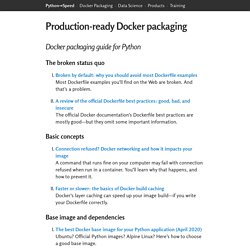 And that’s a problem.A review of the official Dockerfile best practices: good, bad, and insecureThe official Docker documentation’s Dockerfile best practices are mostly good—but they omit some important information. Basic concepts Connection refused? Cheat/cheat: cheat allows you to create and view interactive cheatsheets on the command-line. It was designed to help remind *nix system administrators of options for commands that they use frequently, but not frequently enough to remember. 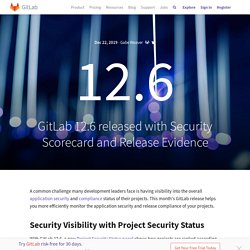 This month's GitLab release helps you more efficiently monitor the application security and release compliance of your projects. With GitLab 12.6, a new Project Security Status panel shows how projects are ranked according to their security profile. This makes it easier for development leaders to quickly understand which projects may have greater risk and therefore might warrant additional attention to address specific issues. Almost every enterprise development team is expected to document and demonstrate that each release complies with their organization’s policies, procedures, and controls. Often it means they have a manual processes to save the documentation so that future audits can review the compliance evidence. 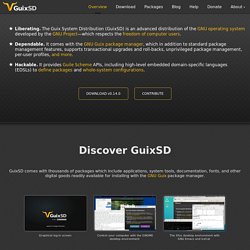 Graphical log-in screen. Control your computer with the GNOME desktop environment. The Xfce desktop environment with GNU Emacs and IceCat. Virtual machine started with 'guix system vm'. Enlightenment, Inkscape, and Serbian text. Read some stories about how people are using GuixSD and GNU Guix in their daily lives. If you don't use the Guix System Distribution for a particular reason, you still can use the GNU Guix package manager on top of any GNU/Linux distribution. GNU Guix won't interfere with the package manager that comes with your distribution.