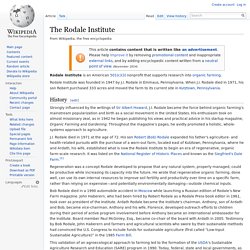 Rodale in Emmaus, Pennsylvania. When J.I. Rodale died in 1971, his son Robert purchased 333 acres and moved the farm to its current site in Kutztown, Pennsylvania. History[edit] Strongly influenced by the writings of Sir Albert Howard, J.I. J.I. Regeneration was a concept Rodale developed to propose that any natural system, properly managed, could be productive while increasing its capacity into the future. Bob Rodale died in a 1990 automobile accident in Moscow while launching a Russian edition of Rodale’s New Farm magazine. This validation of an agroecological approach to farming led to the formation of the USDA’s Sustainable Agriculture Research and Education (SARE) program in 1990. 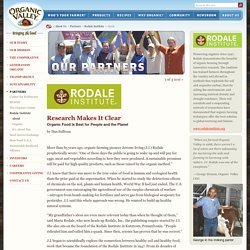 Rodale prophetically wrote: “One of these days the public is going to wake up and will pay for eggs, meat and vegetables according to how they were produced. A sustainable premium will be paid for high quality products, such as those raised by the organic method.” J.I. knew that there was more to the true value of food in human and ecological health than the price paid at the supermarket. “My grandfather’s ideas are even more relevant today than when he thought of them,” said Maria Rodale, who now heads up Rodale, Inc., the publishing empire started by J.I. J.I. began to scientiﬁcally explore the connection between healthy soil and healthy food, work that became the foundation of the Rodale Institute in 1947.

Rodale's Organic Life. Organic Pioneers since 1947. UN Report Says Small-Scale Organic Farming Only Way to Feed the World. Nick Meyer | AltHealthWORKS Even as the United States government continues to push for the use of more chemically-intensive and corporate-dominated farming methods such as GMOs and monoculture-based crops, the United Nations is once against sounding the alarm about the urgent need to return to (and develop) a more sustainable, natural and organic system. 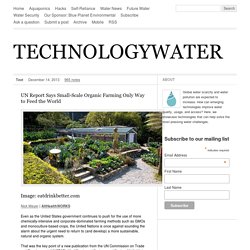 That was the key point of a new publication from the UN Commission on Trade and Development (UNCTAD) titled“Trade and Environment Review 2013: Wake Up Before It’s Too Late,” which included contributions from more than 60 experts around the world. The cover of the report looks like that of a blockbuster documentary or Hollywood movie, and the dramatic nature of the title cannot be understated: The time is now to switch back to our natural farming roots. The New UN Farming Report “Wake Up Before It’s Too Late.”The New UN Farming Report “Wake Up Before It’s Too Late.” Source: althealthworks.com. Organic farming, carefully done, can be efficient. Organic agriculture generally comes at a cost of smaller harvests compared with conventional agriculture, but that gap can be narrowed with careful selection of crop type, growing conditions and management techniques, according a new study. 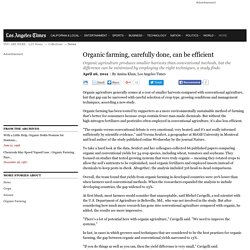 Organic farming has been touted by supporters as a more environmentally sustainable method of farming that's better for consumers because crops contain fewer man-made chemicals. But without the high-nitrogen fertilizers and pesticides often employed in conventional agriculture, it's also less efficient. "The organic-versus-conventional debate is very emotional, very heated, and it's not really informed sufficiently by scientific evidence," said Verena Seufert, a geographer at McGill University in Montreal and lead author of the study published online Wednesday by the journal Nature. 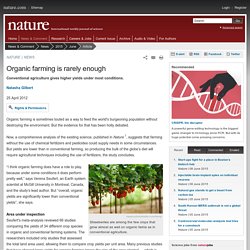 But the evidence for that has been hotly debated. Now, a comprehensive analysis of the existing science, published in Nature1, suggests that farming without the use of chemical fertilizers and pesticides could supply needs in some circumstances. But yields are lower than in conventional farming, so producing the bulk of the globe’s diet will require agricultural techniques including the use of fertilizers, the study concludes. maxim.photoshelter.com/Alamy Strawberries are among the few crops that grow almost as well on organic farms as in conventional agriculture.

“I think organic farming does have a role to play because under some conditions it does perform pretty well,” says Verena Seufert, an Earth system scientist at McGill University in Montreal, Canada, and the study’s lead author. Area under inspection.