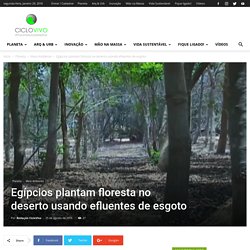 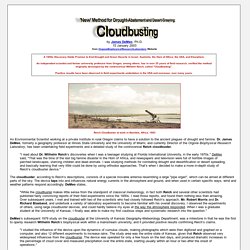 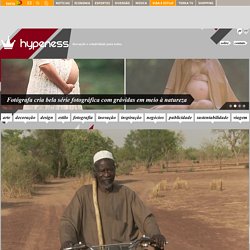 DRIPS Project. Hydrophobic Coating for DRIPS. Qatar greening using atmospheric water. There’s a very interesting project being launched in Qatar this month — sea water is collected by evaporators and used to create an oasis in the middle of a desert: The ultimate aim of the Sahara Forest Project is to return vast areas of desert back to life, providing food, water and clean energy in barren, resource-poor areas around the world. 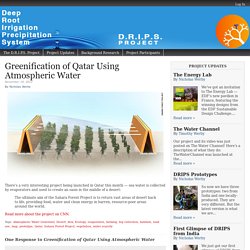 Suggestive image. Medicinal use of the Trees : Extreme Reforestation. By Liliana Usvat Blog 225-365 I started this Blog because of a trip in Spain. 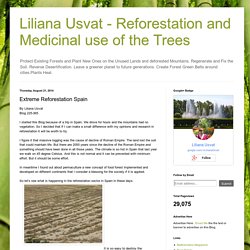 We drove for hours and the mountains had no vegetation. So I decided that If I can make a small difference with my opinions and research in reforestation it will be worth to try. I figure it that massive logging was the cause of decline of Roman Empire. In meantime I found out about permaculture a new concept of food forest implemented and developed on different continents that I consider a blessing for the society if it is applied. So let's see what is happening in the reforestation sector in Spain in these days. It is so easy to destroy the environment and the forests let's see how hard is to replant in Spain. This is so countries such Canada Romania, Brazil, Madagascar to pay attention, what happens when large amount of forests are destroyed.

Reforestation Projects Spain The Green Deserts trees planted February 2012 at Sant Boi de Llobregat Barcelona Spain. TED: How to green the world's deserts and reverse climate change. Could We Grow Fruit Trees in the Omani Desert?! Well, if a certain Dutch inventor is to be believed, then the answer is a resounding yes - and we could do so without irrigation! 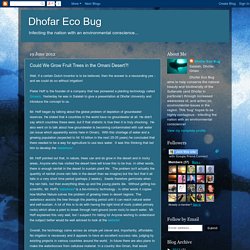 Pieter Hoff is the founder of a company that has pioneered a planting technology called Groasis. Yesterday he was in Salalah to give a presentation at Dhofar University and introduce the concept to us. Mr. Hoff began by talking about the global problem of depletion of groundwater reserves. Termites can hold back deserts by creating oases of plant life. Termites might not top the list of humanity's favorite insects, but new research suggests that their large dirt mounds are crucial to stopping the spread of deserts into semi-arid ecosystems and agricultural lands. 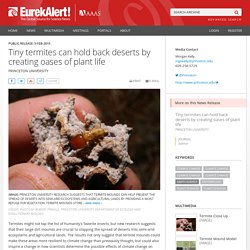 The results not only suggest that termite mounds could make these areas more resilient to climate change than previously thought, but could also inspire a change in how scientists determine the possible effects of climate change on ecosystems. In the parched grasslands and savannas, or drylands, of Africa, South America and Asia, termite mounds store nutrients and moisture, and -- via internal tunnels -- allow water to better penetrate the soil. As a result, vegetation flourishes on and near termite mounds in ecosystems that are otherwise highly vulnerable to "desertification," or the environment's collapse into desert.

"The vegetation on and around termite mounds persists longer and declines slower," she said. New technology to improve tree cover in arid areas - Kenya. In Summary Researchers have developed tree species that are adapted to arid counties and the technology is already on pilot basis in nine counties including Tharaka, Kitui, Machakos, parts of Embu County as well as Siaya and Homabay, Laikipia, Turkana and Marsabit.The new method, involves introduction of two tree species as well as improved crop varieties intercropped with trees that can withstand dry weather A new technology is expected to improve tree cover in arid areas as government gears up to improve country’s tree cover to 10 per cent to fight climate change. 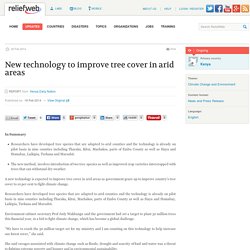 Researchers have developed tree species that are adapted to arid counties and the technology is already on pilot basis in nine counties including Tharaka, Kitui, Machakos, parts of Embu County as well as Siaya and Homabay, Laikipia, Turkana and Marsabit. “We have to reach the 50 million target set for my ministry and I am counting on this technology to help increase our forest cover,” she said. Growing Forests in the Desert. Combating desertification. Inner Mongolia Greening Desert Project. Green revolution in deserts of Israel. Permaculture Greening the Desert. Couple turns desert into oasis. Project for Combating Desertification in Inner Mongolia -full version- Coverting Ethiopian Desert into Hyper-Productive Land. Reversing Desertification in Sahel: Using Lessons from the Loess Plateau. Sahara Forest Project. How Qatar Plans to Turn the Desert Green.