The life of a child during WW2. Anne Frank A Project About Human Rights And To Do What Is Right. WebEnglish. World War Two (WW2) for Kids. Remembrance Day For almost six years from 1939 to 1945 Britain fought the toughest war it had ever experienced. 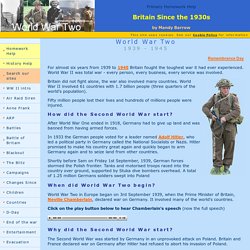 World War II was total war - every person, every business, every service was involved. Britain did not fight alone, the war also involved many countries. World War II involved 61 countries with 1.7 billion people (three quarters of the world's population). Fifty million people lost their lives and hundreds of millions people were injured. After World War One ended in 1918, Germany had to give up land and was banned from having armed forces. 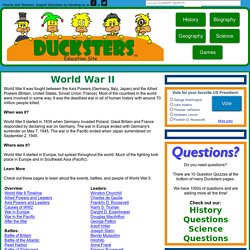 Most of the countries in the world were involved in some way. It was the deadliest war in all of human history with around 70 million people killed. When was it? World War II started in 1939 when Germany invaded Poland. Great Britain and France responded by declaring war on Germany. Where was it? World War II started in Europe, but spread throughout the world. Learn More Check out these pages to learn about the events, battles, and people of World War II: Go here to test your knowledge with a World War II crossword puzzle or word search.

For reference and further reading: CAUSES OF WW2: NEWSPAPER. Andra Världskriget WW2. The Holocaust: How Do The Choices Made During The Holocaust Affect The Choices We Make Today?: Process. Your first task in this WebQuest is to visit the United States Holocaust Museum's website. 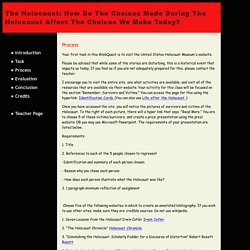 Please be advised that while some of the stories are disturbing, this is a historical event that impacts us today. If you feel as if you are not adequately prepared for this, please contact the teacher. I encourage you to visit the entire site, see what activities are available, and visit all of the resources that are available via their website. Your activitiy for this class will be focused on the section "Remember: Survivors and Victims. " You can access the page for this using the hyperlink: Identification Cards (You can also use Life after the Holocaust ) Once you have accessed the site, you will notice the pictures of survivors and victims of the Holocaust. Requirements: 1. 2. -Identification and summary of each person chosen - Reason why you chose each person - How does each person illustrate what the Holocaust was like?

3. 1 paragraph minimum reflection of assignment 1. 2. 3. The Holocaust: Process. The main task/assignment for the Holocaust WebQuest is to write a letter to a relative as if you were a participant(a soldier or a victim) in the Holocaust. 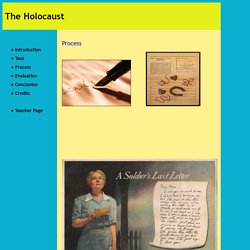 In order to complete this task/assignment, our class will complete the following steps: 1) As a class, the first thing you will do together for this assignment will be to gain a foundation of background information on the Holocaust. This will be done by: 1) watching a video called, "One Survivor Remembers" detailing one Polish family's situation during the Holocaust. A notesheet will be filled out based on the video, 2) A SmartBoard lesson will also be presented detailing critical points and key points of view of the various parties involved, 3) A timeline may also be presented and discussions will take place. 3) After background information is presented, you will be randomly assigned a role of German soldier, American soldier, or concentration camp victim. 5) It should also be noted that this should be typed (12 font, single-spaced) History: World War Two. 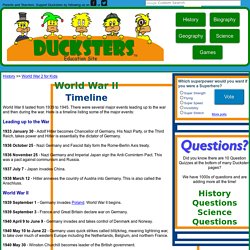 There were several major events leading up to the war and then during the war. Here is a timeline listing some of the major events: Leading up to the War 1933 January 30 - Adolf Hitler becomes Chancellor of Germany. His Nazi Party, or the Third Reich, takes power and Hitler is essentially the dictator of Germany. 1936 October 25 - Nazi Germany and Fascist Italy form the Rome-Berlin Axis treaty. 1936 November 25 - Nazi Germany and Imperial Japan sign the Anti-Comintern Pact. 1937 July 7 - Japan invades China. 1938 March 12 - Hitler annexes the country of Austria into Germany. World War II 1939 September 1 - Germany invades Poland. 1939 September 3 - France and Great Britain declare war on Germany. 1940 April 9 to June 9 - Germany invades and takes control of Denmark and Norway. 1940 May 30 - Winston Churchill becomes leader of the British government.