Hillary Clinton’s Between Two Ferns interview with Zach Galifianakis is the best she’s ever done. Democrats wonder and worry: Why isn’t Clinton far ahead of Trump? NEW YORK — With Election Day less than two months away, Democrats are increasingly worried that Hillary Clinton has not built a formidable lead against Donald Trump despite his historic weaknesses as a national party candidate. 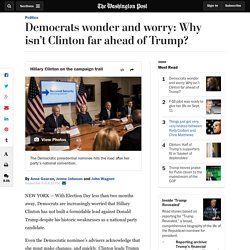 Even the Democratic nominee’s advisers acknowledge that she must make changes, and quickly. Clinton leads Trump by three percentage points, having fallen from her high of nine points in August, according to the latest RealClearPolitics average. That tightening has frustrated many Clinton allies and operatives, who are astonished that she isn’t running away with this race, given Trump’s deep unpopularity and his continuing stream of controversial comments. “Generally, I’m concerned, frankly,” said former Democratic Senate leader Thomas A. Daschle (S.D.). At the same time, Daschle said, “all the things that Trump has done, the numbers should be far more explicitly in her favor, but they’re not.”

The Washington Post and Survey Monkey polled all 50 states. Politics. 2016 Presidential Candidate Positions on 68 Issues - 2016 Presidential Election - ProCon.org. Why do Americans vote on Tuesdays? U.S. presidential election 2016/17 easily explained (explainity® explainer video) Poll finds rejection of many of Trump’s views on immigration. A new Pew Research Center poll finds Americans broadly rejecting many of Donald Trump’s views on immigration, at a time when Trump is striking a markedly different tone on the issue to make inroads with minority voters and turn around depressed poll numbers generally. 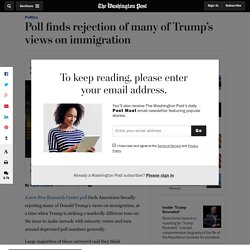 Why the GOP Will Never Accept President Hillary Clinton. A long, long time ago (as recently as eight years, in fact) in a not-so-strange and distant land (our own, actually), it was not surprising that a candidate for president might have a kind word or two about his rival. 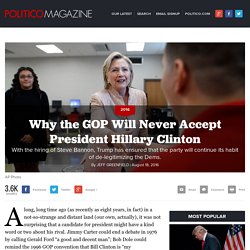 Jimmy Carter could end a debate in 1976 by calling Gerald Ford “a good and decent man”; Bob Dole could remind the 1996 GOP convention that Bill Clinton is “my opponent—and he is my opponent, not my enemy.” And John McCain could firmly reject the idea that Barack Obama was an alien presence—in fact not even a legitimate American. I’ve always voted Republican. Until now. Daniel Akerson was chairman and chief executive of General Motors from 2010 to 2014 and was vice chairman and special adviser to the board of directors for the Carlyle Group from 2014 to 2016. 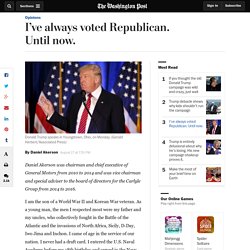 I am the son of a World War II and Korean War veteran. As a young man, the men I respected most were my father and my uncles, who collectively fought in the Battle of the Atlantic and the invasions of North Africa, Sicily, D-Day, Iwo Jima and Inchon. Native Americans plan to make history in the US election. Image copyright WatchCut More Native Americans are participating in the 2016 election than ever before. 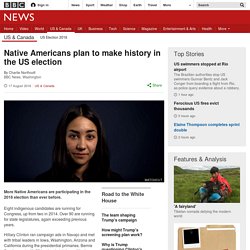 Eight indigenous candidates are running for Congress, up from two in 2014. Over 90 are running for state legislatures, again exceeding previous years. Hillary Clinton ran campaign ads in Navajo and met with tribal leaders in Iowa, Washington, Arizona and California during the presidential primaries. Bernie Sanders met with 90 leaders in total, a political record. "This is the best campaign ever in Indian Country," says Nicole Willis, member of the Confederated Tribes of Umatilla and former advisor to Bernie Sanders. Is this the beginning of the end for Donald Trump? 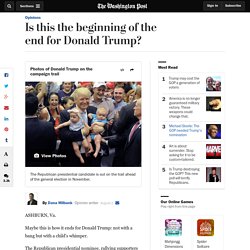 Maybe this is how it ends for Donald Trump: not with a bang but with a child’s whimper. The Republican presidential nominee, rallying supporters in a high school auditorium here, was talking about Chinese currency manipulation when an infant began to cry. Last Week Tonight with John Oliver: Donald Trump (HBO) Breaking News English ESL Lesson Plan on Global Risks. LISTENING - Guess the answers. 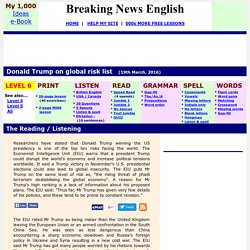 (Please get your parent's permission) Lesson Plan U.S. Constitution's Requirements for a Presidential Candidate At least 35 years oldA natural born citizen of the United StatesA resident of the United States for 14 years Step 1: Primaries and Caucuses There are many people who want to be president, each of these people have their own ideas about how our government should work. Caucus: In a caucus, party members select the best candidate through a series of discussions and votes.Primary: In a primary, party members vote for the best candidate that will represent them in the general election. Step 2: National Conventions Each party holds a national convention to finalize the selection of one presidential nominee. Step 3: General Election The presidential candidates campaign throughout the country in an attempt to win the support of the general population.

People in every state across the country vote for one president and one vice president. Step 4: Electoral College.