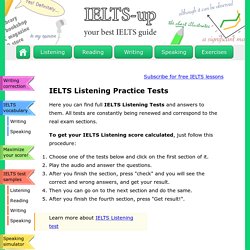 All tests are constantly being renewed and correspond to the real exam sections. To get your IELTS Listening score calculated, just follow this procedure: Choose one of the tests below and click on the first section of it. Play the audio and answer the questions. After you finish the section, press "check" and you will see the correct and wrong answers, and get your result. Learn more about IELTS Listening test IELTS Listening test 1 (40 questions) Free ESL Video Quizzes for Students. Free Quiz Builder for Teachers. Listen A Minute: Easier English Listening and Activities. Brit Slang: Comparing American and British Slang - Video. English Listening Level Test - How well do you understand English? Which English exam is right for you? 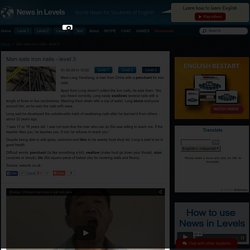 Apart from Long doesn't collect the iron nails, he eats them. Yes, you heard correctly. Long easily swallows several nails with a length of three to five centimetres. Washing them down with a cup of water, Long stuns everyone around him, as he eats the nails with ease. Long said he developed the unbelievable habit of swallowing nails after he learned it from others about 32 years ago. “I was 17 or 18 years old. Despite being able to add glass, ceramics and tiles to his weekly food shop list, Long is said to be in good health. Difficult words: penchant (to like something a lot), swallow (make food go down your throat), stun (surprise or shock), tile (flat square piece of baked clay for covering walls and floors). Dragons in New York. The world’s largest lizard species returns to New York’s Bronx Zoo where an exhibit called “Amazing Monitors” opens on Saturday. 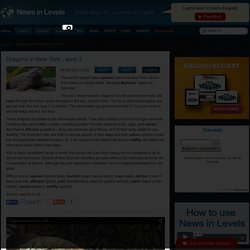 The zoo’s three Komodo dragons, two female and one male, will roam through the indoor space throughout the day, one at a time. The trio is still just teenagers and are just over five feet long (1.5 metres). The adult males can grow to nine feet (2.7m) from nose to tail and weigh around 163 kilos. These dragons are native to the Indonesian islands. Their diet consists of small and large mammals, including deer and buffalo, reptiles, including smaller Komodo dragons, birds, eggs, and carrion. With a highly developed sense of smell, the lizards can track their dying prey for distances of up to almost ten kilometres. Difficult words: species (animal kind), monitor (large tropical lizard), roam (walk), carrion (meat of dead animals), efficient (good), prey (animal that is eaten by another animal), saliva (liquid in the mouth), venom (poison), swiftly (quickly).

Christmas quiz. Episode 01: The Alibi. There are a few pieces of evidence we haven’t been able to track down these last 15 months. 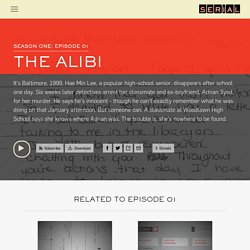 Hotmail The first is Adnan’s Hotmail account. Adnan says that he went to the Woodlawn Public Library after school on Jan. 13 to check his email. That’s when Asia says they had a conversation about his breakup with Hae. So if we could only get our mitts on his Hotmail account or the metadata to his Hotmail account, then maybe we could look to see if he was, in fact, checking his email between 2:15 p.m. and, say, 2:36 p.m. when the state said he was committing a murder. We have his old username and password, so first we tried those. Then we asked Microsoft. Hae’s computer The next thing that mysteriously vanished into the ether was Hae’s computer. We know this because of a Baltimore City Police Department progress report that says Det. Learn English Through Movies. Why Learning A Language Could Save Your Career. Episode 01: The Alibi - Serial. 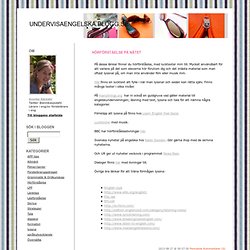