This Hong Kong kindergarten is designed as an indoor playground. Words by Francesca Perry Talk to children about what their ideal classroom would look like and they might tell you it includes a massive slide.

Well, dreams seem to have come true at the Playwall kindergarten in Hong Kong, designed by local architecture studio Eureka, which has its own tunnel slide as a centrepiece. ‘Children learn by playing, and they play with everything,’ the studio says. What’s Next After Zoom? Virtual Reality (VR) allows collaboration between distant colleagues, simulating the feeling of being co-present in the same location. 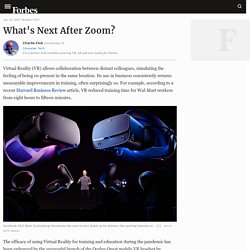 Its use in business consistently returns measurable improvements in training, often surprisingly so. For example, according to a recent Harvard Business Review article, VR reduced training time for Wal-Mart workers from eight hours to fifteen minutes. The efficacy of using Virtual Reality for training and education during the pandemic has been enhanced by the successful launch of the Oculus Quest mobile VR headset by Facebook in May of 2019. The successor to the original Quest, Quest 2, is a more powerful, cheaper ($299) and lighter model. This Coloring Book Shows What A Scientist Really Looks Like. Genetics lecturer Semarhy Quiñones-Soto has turned a project initially started as a way to cope with her own sense of belonging in STEM into a coloring book for all ages showcasing how many shapes a science career can really take. 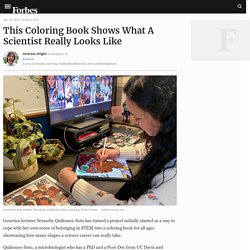 Quiñones-Soto, a microbiologist who has a PhD and a Post-Doc from UC Davis and currently a lecturer at California State University, Sacramento, said her book, Types of Scientists: A Coloring Book for All Ages, aims to inform about different science fields, job positions and careers available to current and future scientists via drawings of women in science fields. "Because I am a lecturer, I was made to feel like I did not belong in science because I do not have my own research lab," she said, "However, not all scientists wear a white coat. " Quiñones-Soto says she wanted to highlight and promote the visibility of women as professionals in science fields, give a quick guide to advising scientific careers, and provides pages to be creative with colors. 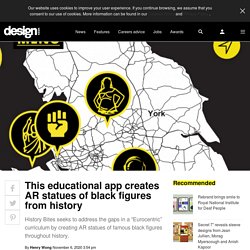 History Bites has been initiated by UK charity Black Learning Achievement and Mental Health (BLAM) as a way to “teach young people about the individuals who fought for the freedom of black people”, the charity says. Early in lockdown, BLAM UK launched a free online learning platform for people aged 6-16. London-based studio Landmrk then reached out to develop a web-based app that uses AR to enhance the experience. BLAM UK founder Ife Thompson tells Design Week that the app is an attempt to make “black narratives more attainable to all”. You can access the app here. From the Bristol bus boycott to NASA The app is web-based, available through scanning a QR code on your phone. Each section has its own educational content (all created by BLAM) which includes lessons, podcasts and essays. 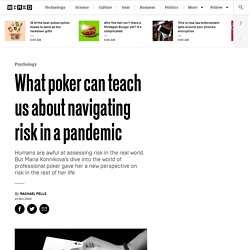 Just look at some of the things we choose to do with our time: we fly helicopters and drive motorbikes, despite the fact accidents happen every day. Around 20 per cent of adults smoke, despite being aware of the well-known links to cancer. During this year we’ve seen people shun masks, defy lockdown rules and pack themselves into bars despite the pandemic ranging around them. Covid-19 has shown how, if ever there’s a time when our attitudes towards risk need reprogramming, it’s now. It’s a theory tried and tested by the writer and psychologist Maria Konnikova. Her resulting book, The Biggest Bluff: How I learned to pay attention, take control, and master the odds, documents how that year didn’t turn out to be a year, the end goal didn’t turn out to be the end; Konnikova developed a love and a skill for poker, winning more than $200,000 in tournaments. 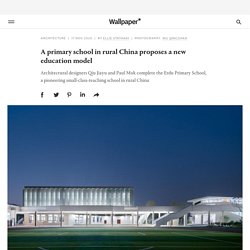 The two creatives – Hangzhou-based Jiayu and New York based Mok – who met as classmates at the University of Hong Kong, were called upon by the country’s Education Bureau in 2015. The task was to work on a proposal for a new school model for Deqing, a town in the countryside outside the urban hub of Hangzhou. The pair developed a design for the Erdu Primary School around small-class-teaching, a flexible, alternative education model that responds specifically to the needs of lower population numbers in the region. Smaller class sizes meant smaller classrooms, providing indeed further space for outdoors areas and communal activities. Digital revolution in Mediation education: E-Mediation Writings organizes series. Kraft Heinz blends feeding the family with STEM education.