12. The consequences of imperialism were viewed differently by the colonizers and the colonized. 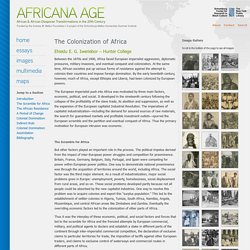 At the same time, African societies put up various forms of resistance against the attempt to colonize their countries and impose foreign domination. By the early twentieth century, however, much of Africa, except Ethiopia and Liberia, had been colonized by European powers. The European imperialist push into Africa was motivated by three main factors, economic, political, and social.

It developed in the nineteenth century following the collapse of the profitability of the slave trade, its abolition and suppression, as well as the expansion of the European capitalist Industrial Revolution. Precolonial African Politics and Government — Living While Black: Themes in African American Thought and Experience. West African empires and kingdomsClick image for larger viewSource University of Sankore Between 1905 and 1906Click image for larger viewSource Precolonial Africa had many different forms of politics and government and such a variety of politics and government was closely related to the level of economic organization and production. 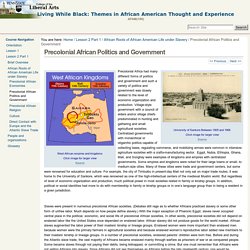 Village-style government with a council of elders and/or village chiefs predominated in hunting and gathering and small agricultural societies. The Ancient World As Seen By Afrocentrists - Butterflies and Wheels. Introduction At some schools and universities in the USA today students are learning a version of ancient history that is strikingly different from what is being taught to their counterparts in Europe.[1] This new narrative cannot be reconciled with the traditional account, which is still being taught in the vast majority of schools and universities. 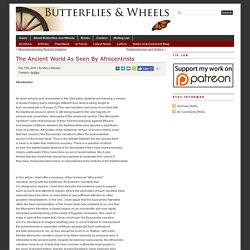 Advocates of the revisionist version ("the Afrocentric narrative") claim that because of their inherent prejudice against Africans and peoples of African descent, the traditionalists have ignored a significant body of evidence. Advocates of the traditional version of ancient history insist that their version ("the Eurocentric narrative") offers the best available account of the known facts. Thus in the debate between the two groups there is more is at stake than historical accuracy. Finsch Pacific Expeditions. Lang-Chapin Congo Expedition. Africa Focus – UW Digital Collections. PreColonial African Images. Precolonial African Economies — Living While Black: Themes in African American Thought and Experience. Precolonial means before the heyday of massive European colonization which occupied much of Africa after the 1870s. 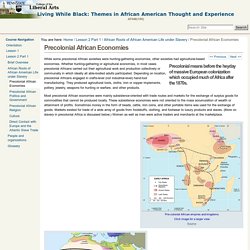