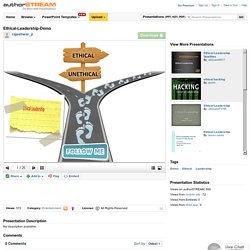 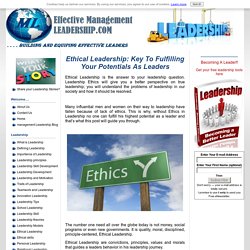 Leadership Ethics will give you a better perspective on true leadership; you will understand the problems of leadership in our society and how it should be resolved. Many influential men and women on their way to leadership have fallen because of lack of ethics. This is why, without Ethics in Leadership no one can fulfill his highest potential as a leader and that’s what this post will guide you through. The number one need all over the globe today is not money, social programs or even new governments. It is quality, moral, disciplined, principle-centered, Ethical Leadership. 10 Ethical Leadership Characteristics, Attributes & Traits. Ethical leaders always know how to do the right thing. 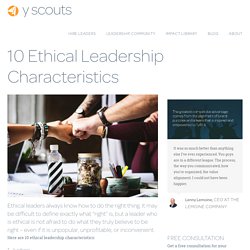 It may be difficult to define exactly what “right” is, but a leader who is ethical is not afraid to do what they truly believe to be right – even if it is unpopular, unprofitable, or inconvenient. Here are 10 ethical leadership characteristics: 1. Justice. Ethical Decision Making Models and 6 Steps of Ethical Decision Making Process - Status Articles. In many ways, ethics may feel like a soft subject, a conversation that can wait when compared to other more seemingly pressing issues (a process for operations, hiring the right workers, and meeting company goals). 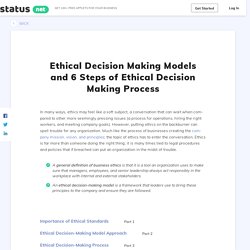 However, putting ethics on the backburner can spell trouble for any organization. Much like the process of businesses creating the company mission, vision, and principles; the topic of ethics has to enter the conversation. Hallmarks of Effective Compliance and Ethics Programs. The enactment of the Foreign Corrupt Practices Act (FCPA) in 1977, the Federal Sentencing Guidelines for Organizations (FSGO) in 1991, the Sarbanes – Oxley Act of 2002, and the 2010 Dodd-Frank Wall Street Reform and Consumer Protection Act all contributed to the perception that a code of ethics is solely a legal compliance and risk management tool. 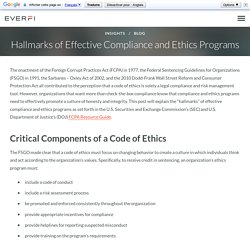 However, organizations that want more than check-the-box compliance know that compliance and ethics programs need to effectively promote a culture of honesty and integrity. This post will explain the “hallmarks” of effective compliance and ethics programs as set forth in the U.S. Securities and Exchange Commission’s (SEC) and U.S. Department of Justice’s (DOJ) FCPA Resource Guide. 12 Steps to Building a Best-practices Ethics Program. In Part I of this report, it stated that, more than in the past, employees feel pressured to meet organizational goals. 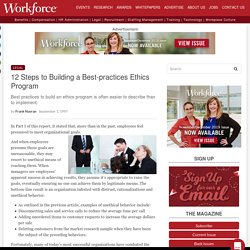 And when employees presume those goals are unreasonable, they may resort to unethical means of reaching them. When managers see employees’ apparent success in achieving results, they assume it’s appropriate to raise the goals, eventually ensuring no one can achieve them by legitimate means. The bottom-line result is an organization infested with distrust, rationalizations and unethical behavior. As outlined in the previous article, examples of unethical behavior include:Disconnecting sales and service calls to reduce the average time per callAdding unordered items to customer requests to increase the average dollars per saleDeleting customers from the market research sample when they have been the subject of the preceding behaviors. The formula derived from these best practices is fairly straightforward.

Vision statement. Business Ethics_Chapter 5 slides. Ethics in following orders, public servants bind. If people smugglers were paid to return to Indonesia and if this activity were found to be illegal, following ministerial instruction would not be a valid excuse, say public sector corruption and accountability academics. 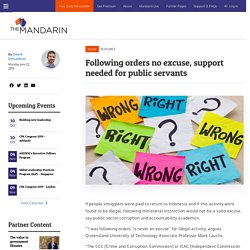 “‘I was following orders’ is never an excuse” for illegal activity, argues Queensland University of Technology Associate Professor Mark Lauchs. “The CCC [Crime and Corruption Commission] or ICAC [Independent Commission Against Corruption] are never going to care, nor will a judge or jury,” the former head of the ethics and integrity unit at the Queensland Public Service Commission told The Mandarin. There has been controversy in recent days following claims Australian officials gave money to people smugglers to turn back their boats. “The Criminal Code in Australia makes clear that any payments to a people smuggler to take people from one place to a foreign country is an act of people smuggling,” Professor Don Rothwell told the ABC on Tuesday. “Use your own smarts.

Beyond Compliance: How Boards Should Think About An Ethical Culture. Boards are increasingly expected to ensure that the corporations they direct are not only profitable but sustainable, not only compliant but ethical. 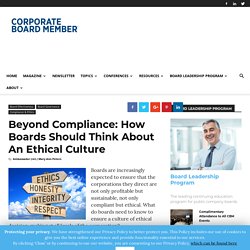 What do boards need to know to ensure a culture of ethical decision-making at all levels of the corporation? First, boards should understand that character alone is not a sufficient guarantee of ethical decision-making. We all want to assume that good people will make good, ethical decisions—but that is not necessarily the case. Social science research over decades has demonstrated that behavior is more dependent on context than on individual ethics or values. And context is often another word for culture. All organizations, public, private and nonprofit, are susceptible to ethical failure that cannot be explained by the misbehavior of a few bad apples.

Thousands of Wells Fargo employees committed fraud against the bank’s customers; would those same people be under indictment if they had worked for a different bank?