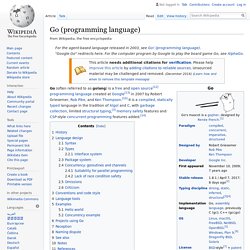 For the computer program by Google to play the board game Go, see AlphaGo. Two major implementations exist: With this type definition, ipv4addr(x) interprets the uint32 value x as an IP address. Simply assigning x to a variable of type ipv4addr is a type error. Issue 3328 - go - Virus false positive in go.weekly.2012-03-13.windows-386.msi ? - The Go Programming Language. Go1.1.windows-386.zip tr/crypt.xpack.gen2. Go tr/crypt.xpack.gen2. Getting Started. Download the Go distribution Download GoClick here to visit the downloads page Official binary distributions are available for the FreeBSD, Linux, Mac OS X (Snow Leopard and above), and Windows operating systems and the 32-bit (386) and 64-bit (amd64) x86 processor architectures.

If a binary distribution is not available for your combination of operating system and architecture, try installing from source or installing gccgo instead of gc. System requirements The gc compiler supports the following operating systems and architectures. Mtoader/google-go-lang-idea-plugin. On Go. Oh, go on Published: 2009 November 15 Updated 2009-11-16: Well, it turns out people read this article. 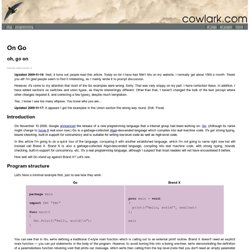 Programmiersprache Go feiert dritten Geb... How I sped up Go by 20% (or is Go really slower than Java?) The story of a faulty benchmark I confess: I didn’t really speed up Go by 20%. 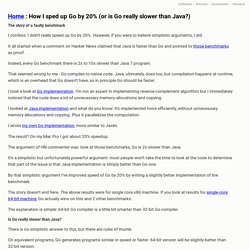 However, if you were to believe simplistic arguments, I did. Computer Language Benchmarks Game. "What gets us into trouble is not what we don't know, it's what we know for sure that just ain't so. 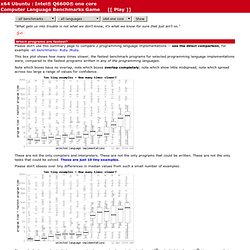 " Please don't use this summary page to compare 2 programming language implementations -- use the direct comparison, for example -all benchmarks- Ruby JRuby. This box plot shows how many times slower, the fastest benchmark programs for selected programming language implementations were, compared to the fastest programs written in any of the programming languages. Note which boxes have no overlap, note which boxes overlap completely; note which show little midspread, note which spread across too large a range of values for confidence. These are not the only compilers and interpreters. These are not the only programs that could be written. Please don't obsess over tiny differences in median values from such a small number of examples.

Less is exponentially more. Here is the text of the talk I gave at the Go SF meeting in June, 2012. 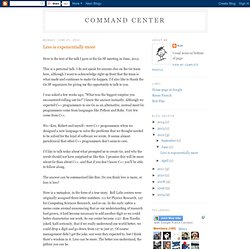 This is a personal talk. I do not speak for anyone else on the Go team here, although I want to acknowledge right up front that the team is what made and continues to make Go happen. I'd also like to thank the Go SF organizers for giving me the opportunity to talk to you. I was asked a few weeks ago, "What was the biggest surprise you encountered rolling out Go? " I knew the answer instantly: Although we expected C++ programmers to see Go as an alternative, instead most Go programmers come from languages like Python and Ruby. We—Ken, Robert and myself—were C++ programmers when we designed a new language to solve the problems that we thought needed to be solved for the kind of software we wrote.

I'd like to talk today about what prompted us to create Go, and why the result should not have surprised us like this. The answer can be summarized like this: Do you think less is more, or less is less? Is := really a non-declaration statement? Am 28. 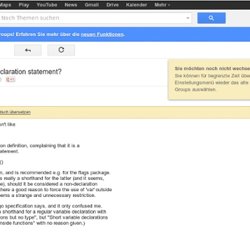 Juli 2010, um 3:33 Uhr, schrieb Scott Lawrence: > Der Compiler nicht mag > > Myvar: = func () > > Außerhalb einer Funktion Definition, klagen darüber, dass es sich um eine > Nicht-Deklarationsanweisung. > > Var myvar = func () > > Kein Problem verursacht, und wird empfohlen, z. How to Write Go Code. Introduction This document demonstrates the development of a simple Go package and introduces the go tool, the standard way to fetch, build, and install Go packages and commands. The go tool requires you to organize your code in a specific way. Please read this document carefully. It explains the simplest way to get up and running with your Go installation. A similar explanation is available as a screencast. Code organization. A Tour of Go. The Go Programming Language Specification. Version of May 8, 2013 Introduction This is a reference manual for the Go programming language. 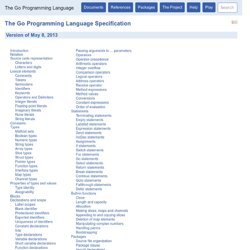 For more information and other documents, see . Effective Go — Deutsche Übersetzung. Teaching Distributed Systems in Go. Our FAWN team has been spending a lot of time looking at memory-efficient data and algorithms structures for various things (with a lot of emphasis on key-value stores, as per our first and second papers on FAWN-KV and SILT , respectively). 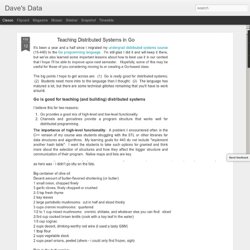 Coming up at NSDI'13 , Bin Fan has a new paper in which we substantially improve the throughput of the memcached distributed DRAM cache. One of the core techniques we use is a new multiple-reader, single-writer concurrent variant of Cuckoo hashing that we call optimistic cuckoo hashing. It combines the refinement of a technique we introduced in SILT ("partial-key cuckoo hashing"), a new way of moving items during cuckoo insertion, and an optimistic variant of lock-striping to create a hash table that is extremely compact and supports extremely high read throughput, while still allowing one thread to update it at high speed (about 2M updates/second in our tests). 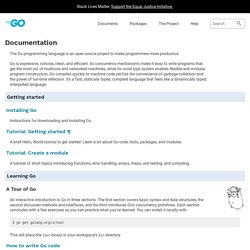 Go is expressive, concise, clean, and efficient. Its concurrency mechanisms make it easy to write programs that get the most out of multicore and networked machines, while its novel type system enables flexible and modular program construction. Go compiles quickly to machine code yet has the convenience of garbage collection and the power of run-time reflection. It's a fast, statically typed, compiled language that feels like a dynamically typed, interpreted language. Go's Declaration Syntax. Newcomers to Go wonder why the declaration syntax is different from the tradition established in the C family. 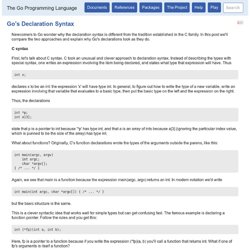 In this post we'll compare the two approaches and explain why Go's declarations look as they do. C syntax First, let's talk about C syntax. C took an unusual and clever approach to declaration syntax. Instead of describing the types with special syntax, one writes an expression involving the item being declared, and states what type that expression will have. Int x; declares x to be an int: the expression 'x' will have type int. Thus, the declarations. Go at Google. SPLASH, Tucson, Oct 25, 2012.