Netflix Open Source Software Center. How to deploy Node.js Applications with pm2 and Nginx on Ubuntu. Pm2 is a process manager for Node.js applications, it allows you to keep your apps alive and has a built-in load balancer. 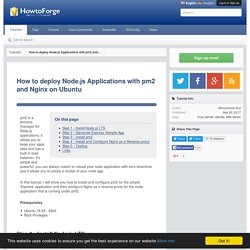 It's simple and powerful, you can always restart or reload your node application with zero downtime and it allows you to create a cluster of your node app. In this tutorial, I will show you how to install and configure pm2 for the simple 'Express' application and then configure Nginx as a reverse proxy for the node application that is running under pm2. Prerequisites Ubuntu 16.04 - 64bitRoot Privileges Step 1 - Install Node.js LTS In this tutorial, we will start our project from scratch. Install the package 'python-software-properties' from the Ubuntu repository and then add the 'nodesource' Nodejs repository.

Overview — MonaServer. How to Install Tomcat on Ubuntu Linux. Apache Tomcat is a web server and servlet container that is used to serve Java applications. 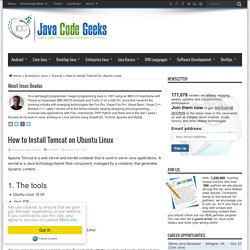 A servlet is a Java technology-based Web component, managed by a container, that generates dynamic content. 1. The tools Ubuntu Linux 16.04Java JDKApache Tomcat. Caching in a Distributed Web Farm Using ASP.NET. There are only two hard things in Computer Science: cache invalidation and naming things. 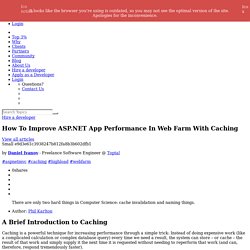 Author: Phil Karlton A Brief Introduction to Caching Caching is a powerful technique for increasing performance through a simple trick: Instead of doing expensive work (like a complicated calculation or complex database query) every time we need a result, the system can store – or cache – the result of that work and simply supply it the next time it is requested without needing to reperform that work (and can, therefore, respond tremendously faster). Of course, the whole idea behind caching works only as long the result we cached remains valid. Products and Success Stories. AMQP Products A standard is no use without products, and there are is a choice of excellent AMQP technology suppliers. 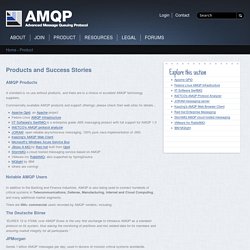 Commercially available AMQP products and support offerings; please check their web sites for details... Notable AMQP Users In addition to the Banking and Finance Industries, AMQP is also being used to connect hundreds of critical systems in Telecommunications, Defense, Manufacturing, Internet and Cloud Computing, and many additional market segments. There are 500+ commercial users recorded by AMQP vendors, including: The Deutsche Börse. Open Whisper Systems. Backend for Frontends – a microservices pattern – Technology explained. The busy JavaScript developer's guide to Sails.js, Part 1: Build and deploy a basic web app with Sails. Get started with Sails in your local development environment, then deploy it to Bluemix Ted NewardPublished on November 03, 2015/Updated: July 12, 2016. 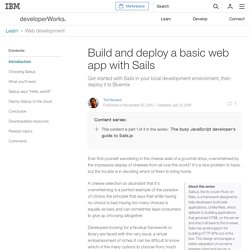 Solr - Jms - ActiveMQ or RabbitMQ or ZeroMQ or. Your first Django project! Part of this chapter is based on tutorials by Geek Girls Carrots ( of this chapter are based on the django-marcador tutorial licensed under Creative Commons Attribution-ShareAlike 4.0 International License. 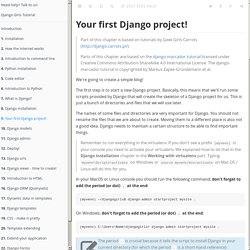 The django-marcador tutorial is copyrighted by Markus Zapke-Gründemann et al. We're going to create a simple blog! The first step is to start a new Django project. WSGI — WSGI.org. 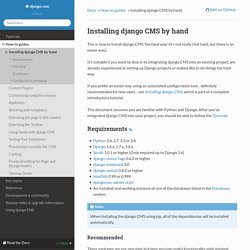 To make your life easier, add the following at the top of the file: # -*- coding: utf-8 -*-import osgettext = lambda s: sBASE_DIR = os.path.dirname(os.path.dirname(__file__)) Add the following apps to your INSTALLED_APPS. This includes django CMS itself as well as its dependencies and other highly recommended applications/libraries: 'cms', # django CMS itself'treebeard', # utilities for implementing a tree'menus', # helper for model independent hierarchical website navigation'south', # Only needed for Django < 1.7'sekizai', # for javascript and css management'djangocms_admin_style', # for the admin skin.

Sequel: The Database Toolkit for Ruby. A Tour of Go. Lectures - Computer Science S-75. Ruby Primer - Introduction to Objects. We will begin our journey with objects. 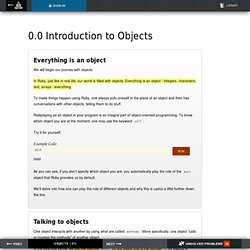 In Ruby, just like in real life, our world is filled with objects. Everything is an object - integers, characters, text, arrays - everything. To make things happen using Ruby, one always puts oneself in the place of an object and then has conversations with other objects, telling them to do stuff. Roleplaying as an object in your program is an integral part of object-oriented programming.

To know which object you are at the moment, one may use the keyword self. Try it for yourself: As you can see, if you don't specify which object you are, you automatically play the role of the main object that Ruby provides us by default. Geekcamp Baguio Ruby on Rails Workshop Guide. Apache Tutorial: Introduction to Server Side Includes. Apache HTTP Server Version 1.3 You are looking at the documentation for the 1.3 version of the Apache HTTP Server, which is no longer maintained, and has been declared "end of life". 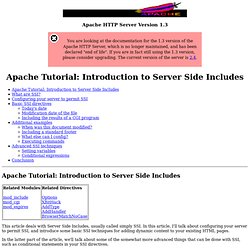 If you are in fact still using the 1.3 version, please consider upgrading. The current version of the server is 2.4. Apache Tutorial: Introduction to Server Side Includes This article deals with Server Side Includes, usually called simply SSI. In the latter part of the article, we'll talk about some of the somewhat more advanced things that can be done with SSI, such as conditional statements in your SSI directives.

What are SSI? SSI (Server Side Includes) are directives that are placed in HTML pages, and evaluated on the server while the pages are being served. The decision of when to use SSI, and when to have your page entirely generated by some program, is usually a matter of how much of the page is static, and how much needs to be recalculated every time the page is served. Options +Includes. An Introduction to Python’s Flask Framework. Flask is a small and powerful web framework for Python. 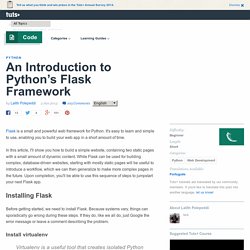 It's easy to learn and simple to use, enabling you to build your web app in a short amount of time. In this article, I'll show you how to build a simple website, containing two static pages with a small amount of dynamic content. While Flask can be used for building complex, database-driven websites, starting with mostly static pages will be useful to introduce a workflow, which we can then generalize to make more complex pages in the future. Ultimate guide to learning AngularJS in one day. Mastered this? Try my Opinionated AngularJS styleguide for teams What is AngularJS? Angular is a client-side MVC/MVVM framework built in JavaScript, essential for modern single page web applications (and even websites).