The Peer to Peer Search Engine. How Collaboration in Tech is Changing and Why Developers Should Care. The Arrival of Advanced Social Technologies As Christian Buckley succinctly puts it, “[s]ocial collaboration has become the underlying fabric of the modern digital workplace”. 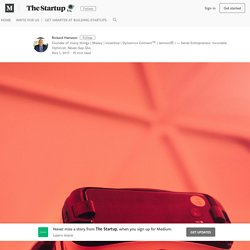 This is unsurprising given that some industry experts, such as Dom Price, the head of R&D at Atlassian, estimate that approximately 90% of organizations are tackling issues so complex that team-based solutions are necessary (source). Indeed, technological advancements in Internet-based social interactions have ushered in revolutionary changes to the ways in which modern employees work together and collaborate. Having moved from the era of “systems of record” to the contemporary phase of “systems of engagement”, the new reality of tech-centred business is that: “Social interactions and conversation have become the backbone of our corporate knowledge” (Christian Buckley). These new technologies provide workers with previously unheard-of freedom to work anywhere, any time, and with anybody. Blockchain 101: Breaking down the basics behind the buzzword. This wouldn’t be a blockchain article without addressing cryptocurrency. 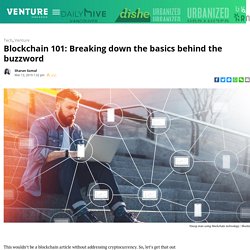 So, let’s get that out of the way right in the beginning. Cryptocurrency does not equal blockchain. Instead, blockchain serves as the public transaction ledger of cryptocurrencies. If you didn’t know this before, then you already learned something new! The Terrifying Potential of the 5G Network. In January, 2018, Robert Spalding, the senior director for strategic planning at the National Security Council, was in his office at the Eisenhower Executive Office Building, across the street from the White House, when he saw a breaking-news alert on the Axios Web site. 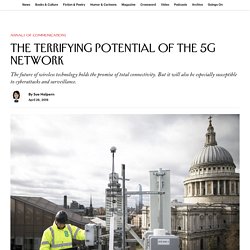 “Scoop,” the headline read, “Trump Team Considers Nationalizing 5G Network.” At the time, Spalding, a brigadier general in the Air Force who previously served as a defense attaché in Beijing, had been in the military for nearly three decades. At the N.S.C., he was studying ways to insure that the next generation of Internet connectivity, what is commonly referred to as 5G, can be made secure from cyberattacks.

“I wasn’t looking at this from a policy perspective,” he said. “It was about the physics, about what was possible.” Two words explain the difference between our current wireless networks and 5G: speed and latency. 5G—if you believe the hype—is expected to be up to a hundred times faster. Top 10 Ways to Teach Yourself to Code. Full-Spectrum-Dominance.com © 2019. Gray code at the pediatrician's office. Gray code at the pediatrician's office Last week we took Iris to the pediatrician for a checkup, during which they weighed, measured, and inoculated her. 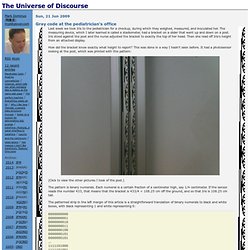 The measuring device, which I later learned is called a stadiometer, had a bracket on a slider that went up and down on a post. Iris stood against the post and the nurse adjusted the bracket to exactly the top of her head. Then she read off Iris's height from an attached display. How did the bracket know exactly what height to report? (Click to view the other pictures I took of the post.) The pattern is binary numerals. The patterned strip in the left margin of this article is a straightforward translation of binary numerals to black and white boxes, with black representing 1 and white representing 0: If you are paying attention, you will notice that although the strip at left is similar to the pattern in the doctor's office, it is not the same. Gray codes solve the following problem with raw binary numbers. Mathematical. Net.Wise. Being Complex.

Artificially Intelligent. Gamification. SCIENCE Wise. Brains Map Ideas. Robotic.Ally. Embedded system. An embedded system is a computer system with a dedicated function within a larger mechanical or electrical system, often with real-time computing constraints.[1][2] It is embedded as part of a complete device often including hardware and mechanical parts. 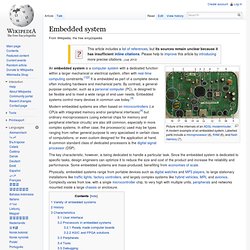 By contrast, a general-purpose computer, such as a personal computer (PC), is designed to be flexible and to meet a wide range of end-user needs. Embedded systems control many devices in common use today.[3] Modern embedded systems are often based on microcontrollers (i.e CPUs with integrated memory and/or peripheral interfaces)[4] but ordinary microprocessors (using external chips for memory and peripheral interface circuits) are also still common, especially in more complex systems. In either case, the processor(s) used may be types ranging from rather general purpose to very specialised in certain class of computations, or even custom designed for the application at hand. 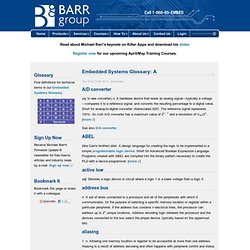