Big educational laptop and tablet projects. [also available in Thai] Recent headlines from places as diverse as Kenya ("6,000 primary schools picked for free laptop project") and California ("Los Angeles plans to give 640,000 students free iPads") are just two announcements among many which highlight the increasing speed and scale by which portable computing devices (laptops, tablets) are being rolled out in school systems all over the world. 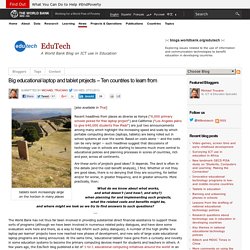 Based on costs alone -- and the costs can be very large! -- such headlines suggest that discussions of technology use in schools are starting to become much more central to educational policies and planning processes in scores of countries, rich and poor, across all continents. Are these sorts of projects good ideas? It depends. Apple expands electronic educational revolution to more countries in Asia, Latin America, Europe. iBooks Textbooks and iTunes U Course Manager, Apple's attempts to revolutionize education and bring curriculum fully into the digital age, are expanding into even more countries in Asia, Latin America, Europe. 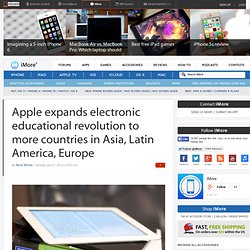 Eddy Cue, senior vice president of Internet Software and Services, Apple: Great news for educational institutions willing and able to go paperless. Now if we could also get an iTunes Author update that adds iPhone support, the revolution would be complete(r). Have you, or anyone in your family made the switch to e-textbooks? If so, have you found it as convenient and cost-effective as you'd hoped? Exchange 2.0 - Technology-enabled International Interaction. Rationale: International collaboration is part of Secretary Arne Duncan’s call for international engagement and education reform: “. . . 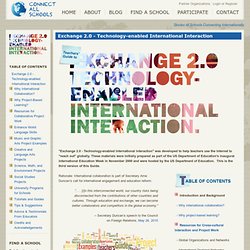 [I]n this interconnected world, our country risks being disconnected from the contributions of other countries and cultures. Through education and exchange, we can become better collaborators and competitors in the global economy.” -- Secretary Duncan’s speech to the Councilon Foreign Relations, May 26, 2010 The Teacher's Guide to International Collaboration was developed to help teachers use the Internet to "reach out" globally. This Guide has been prepared as part of the Department of Education's effort to expand global awareness through collaboration between students and teachers in the US with their peers around the world. Uruguay’s One Laptop Per Child program: Impact and numbers.

Uruguay may only have 3.3 million inhabitants, but this South American country has distributed more than half a million free laptops to its students and teachers over the last five years. 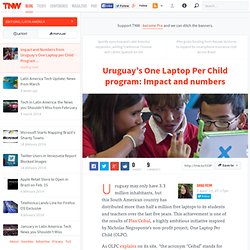 This achievement is one of the results of Plan Ceibal, a highly ambitious initiative inspired by Nicholas Negroponte’s non-profit project, One Laptop Per Child (OLPC). As OLPC explains on its site, “the acronym “Ceibal” stands for Basic Informatic Educative Connectivity for Online Learning (Conectividad Educativa de Informática Básica para el Aprendizaje en Línea) and was chosen for the ceibo tree’s symbolic meaning to the Uruguayan people.” Plan Ceibal got its kickstart in 2007 with a decree of then President Tabaré Vazquez, which detailed the program’s ambitions and was soon followed by a pilot project.

It was also determined that the computers would be inexpensive XO-1 devices, previously known as “$100 laptops,” which quickly earned the nickname of “ceibalitas.” Building social equity through ICT. Introducing UNESCO.

Irish school's attempt to replace books with HP tablets results in 'unmitigated disaster' By Shane Cole Major technical problems have forced an Irish secondary school to migrate its students back to paper books after their deployment of HP ElitePad tablets became what the school's principal termed "an unmitigated disaster. 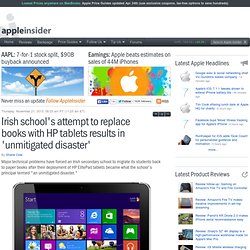 " Rather than purchasing traditional books at the beginning of the school term, students at Mountrath Community School in County Laois, Ireland, were instead made to buy HP ElitePad tablets running Microsoft's Windows 8 operating system, reports the Irish Independent. The €550 ($741) tablets have since frustrated students by refusing to power on, going to sleep unexpectedly, and experiencing hardware failures involving the devices' logic boards.

Mountrath principal Margin Gleeson wrote in a letter to parents that the "HP Elite Pad has proved to be an unmitigated disaster" and that a return to paper books — at the school's expense — was necessary to "ensure stability and continuity of education. " "We're not blaming anyone" for the failures, Gleeson said. MIT Media Lab Founder: Nicholas Negroponte.

The CGI blog: Educating the Next Generation of Latin American Leaders. Credit: Salud Integral Colombia - Sesame Workshop When cross-sector leaders from around the world gather in Rio de Janeiro, Brazil on Monday and Tuesday for the CGI Latin America Meeting, they will work together to define strategies for propelling the region's social and economic progress forward. 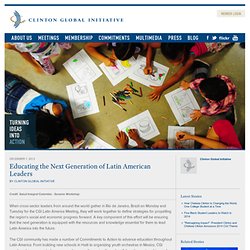 A key component of this effort will be ensuring that the next generation is equipped with the resources and knowledge essential for them to lead Latin America into the future. The CGI community has made a number of Commitments to Action to advance education throughout Latin America. From building new schools in Haiti to organizing youth orchestras in Mexico, CGI members have supported young people across the region through collaborative partnerships and new, creative models. Building 80 New Schools in Haiti - Digicel Haiti Foundation.